There’s a fellow on Twitter who somehow came across my path, claiming that the Japanese are playing victim regarding the nuclear destruction of Hiroshima. This moves me to want to offer a refuter for those who encounter such idiocy. It’s probably not complete – feel free to tell me what to add. 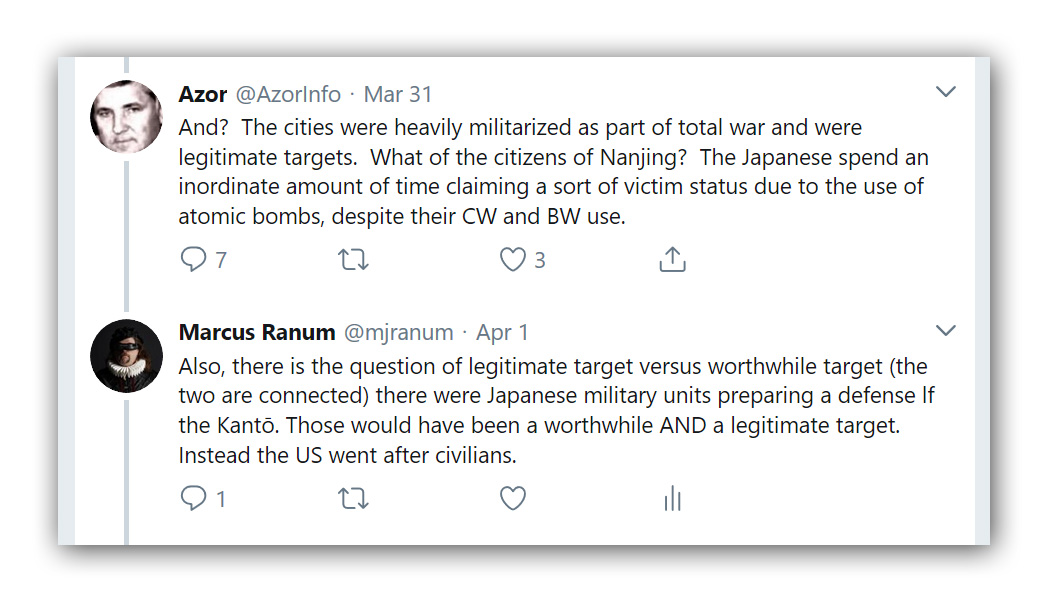 Claim: Japan had distributed war production throughout the civilian population; manufacture of things such as aviators’ suits, and even munitions, was done in people’s homes. Therefore, it was impossible to distinguish a military target from civilian targets, and it was justified to destroy entire cities.

Response: Japan had distributed war production into the civilian population as a morale effort. Ever since World War I, the kind of military production that is decisive on the battlefield is industrialized and mechanized: what matters are the steel mills, ship ways, aviation factories, munitions dumps, and oil refineries. What mattered were tanks, bombs, machine guns, torpedoes, ships, submarines – none of which were anything that anyone could produce from their home. During the strategic bombing campaign against Germany, bomber command also attacked things like machine and weapons plants, oil refineries, steel refineries – not just cities full of civilians.

There was a major Japanese naval base, Kure, which is right outside of Hiroshima. It was a military target, yet ground zero – which Tibbetts hit exactly – was in the center of a city full of civilians.

The Japanese Were Not Going to Surrender

Claim: The Japanese were going to fight to the death, many allied soldiers would have died in a land invasion.

Response: The Japanese were trying to surrender, a month before the bombs were dropped. Prior to the Potsdam Declaration (July 26) the “big six” – the leaders of the Japanese military regime – were making back-channel entreaties to Stalin to mediate a surrender. Instead of diplomacy, the allies issued the Potsdam Declaration calling for unconditional surrender with the alternative being “prompt and utter destruction.” Truman already knew about the bomb and the July 16 test at Trinity, two weeks before. In fact, the Little Boy bomb that was dropped on Hiroshima left Hunters Point Naval Yard in California and arrived at the air base on Tinian on July 26.

It seems reasonable to believe that the Japanese would have surrendered in a normal national/military surrender had the allies not insisted on unconditional surrender.

Hundreds of Thousands of Allied Troops Would Have Died

Claim: The Japanese were fortifying against an island-hopping style invasion and would have killed a great number of allied troops.

Response: The Japanese were, indeed, preparing to defend the mainland. Both the Japanese and the allied commanders had identified the most likely landing site for an assault on Tokyo was through the Kanto plain, and the Japanese had approximately 14 divisions of troops deploying and building defenses in that area, when the war ended. Those troops were a valid military target. The allied war-planners could have used the two nuclear weapons on the defenders of the Kanto plain. Instead, they dropped uniquely valuable military assets on strategically useless targets. One can only observe that the allied commanders didn’t appear to care much for the lives of their men, since they were leaving a significant military force standing, which would have put up quite a fight – in order to kill cities full of civilians.

There were large Japanese military contingents pinned in Manchuria, which were about to be attacked by the Red Army. They were also a valuable military target, which was ignored in favor of killing cities full of civilians. 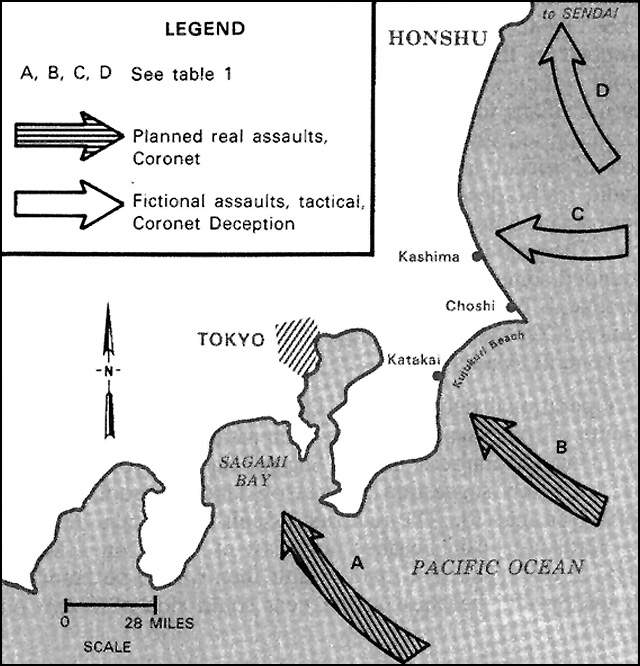 Claim: The Imperial Japanese army was a horrible bunch of bastards who carried out all sorts of atrocities. Therefore, they deserved it.

Response: Perhaps the Japanese army deserved horrible destruction, but the civilian population of Hiroshima and Nagasaki (Tokyo, too, for that matter) do not become military targets because of the actions of “their” military. In fact, the Japanese military was out of the control of the Japanese population at the time; that’s what a “military dictatorship” is.

The Japanese people were suffering from “out of control government” and some supported it, while others did not. Using area weapons on cities kills people who wish to surrender and become your allies just as effectively as it kills hostiles. It’s not only immoral, it’s bad strategy.

Nobody is saying that the Japanese did not commit atrocities and that they did not deserve to face the victors’ justice, as the Nazis did at Nuremberg. Ultimately, this argument is “two wrongs don’t make a right.” And, really, they don’t.

PS – The US has also used chemical and biological warfare. Do we deserve nuclear weapons on Boston?

The Entire Japanese Population Was Involved

Response: US taxpayers and civilians fanatically supported the US wars of aggression in Vietnam, Cambodia, Afghanistan, Iraq, Libya, Yemen, Syria, Panama, and Grenada. Are you saying that, because the US population uses about 16% of the taxes its citizens contribute to prosecute these wars that it would be justified for someone to use a nuclear weapon on Boston? The US killed around 2 million people in Vietnam and Cambodia – and the US citizens paid for it, built the weapons, made money off it, and otherwise supported the military – fair’s fair, right?

Of course the idea of dropping a nuclear weapon on Boston in return for what the US did in Vietnam is absurd. But then, so is dropping a nuclear weapon on Hiroshima for what another group of Japanese did in Nanking. I am not arguing that nations should not be held to account for their crimes – quite the opposite – but justice cannot be accomplished through collective punishment. It is the leaders of nations that bear the primary responsibility for the policy decisions they enact – especially wars of aggression.

Japanese troops at Nanking, US troops in Vietnam. Same as it ever was.

War Is Awful; These Things Happen

Claim: War is always awful and lots of people get hurt and killed. So, somehow, what happened to the Japanese at Hiroshima and Nagasaki is just part of the awfulness of war and they ought to stop complaining about it.

Response: That’d be like saying that the US should have just calmed down and not gotten so bent out of shape about the 9/11 attacks; bad things happen, you know?

The US and Americans in general have developed an attitude that is predicated on the fact that the US homeland has never been bombed. The US has never had mass attacks against its civilians (unless you were one of the Indigenous Peoples, who were genocided by the US Government and American colonists) – since being bombed or genocided is not part of American cultural experience, we appear to have forgotten how unpleasant it is. Americans would do well to remind themselves that many Americans wound up in North America in order to avoid Europe’s horrific wars of religion, or the horrors of World War I and II. Anyone who tries to shrug off war as being “always awful” is demonstrating how thoughtless or uneducated they are.

If you believe “these things just happen” you should ask yourself how much choice political leaders have to negotiate instead of starting wars. The reality is that these things don’t “just happen” – they happen for political convenience, laziness, or geopolitical gain. You would probably not appreciate it if everything you value and everyone you love was destroyed and some asshole on the internet shrugged and said “shit happens.”

Americans have become remarkably cavalier about shrugging off the consequences of American war. But those wars have consequences. Most Americans do not know, for example, that Osama Bin Laden considered the 9/11 attacks to be part of a declared war on the US, based on a declaration published in 1996. Part of the reasons he gave for his declaration of war was the consequences of other US military actions. In other words, he did not just shrug off American wars. It is important to remember that wars and war crimes create long memories – the US is very fortunate that the Japanese have accepted having two of their cities incinerated in nuclear fire for pretty flimsy reasons. Not everyone is so forgiving and we should not assume that everyone will simply shrug off our actions because we tell them to.

Claim: The Japanese culture at the time was dominated by a nihilistic death-cult form of Buddhism called “nichiren” that encouraged them to die fearlessly in service of the emperor. They wanted to die. Dropping nuclear weapons on a city full of Japanese was fulfilling their wish to die.

Response: Perhaps some of the citizens of Hiroshima were willing and happy to die, but the vast majority were not, as you can tell from their struggle to survive in the aftermath of the bombing.

Lastly, it’s probably not true that the Japanese value life any more or less than anyone else. There is often a big difference between people’s public ideology and their personal behavior. One can just as easily describe all christians as “a death cult that believes you’re better off dead so you can enjoy an afterlife” and argue that all christians want to die soon. Dehumanizing one’s enemy in war is a necessary technique for getting soldiers and supporting civilians comfortable with committing atrocities. You may want to go look in a mirror and think about what you’re saying next time.

But My Daddy/Granddaddy Might Have Died Attacking Japan If The Bombs Hadn’t Been Used!

Claim: I probably would not have been born at all, because my ancestor might have died if the US had done a sea-borne invasion of Japan. So, I am glad they used the nuclear weapons and ended the war when they did.

Response: If your ancestor had died, it probably would have been as much the result of a bad command decision on the part of his government’s highest-level military strategists. Japan was trying to surrender, had no navy, no air force, and its army was being wiped out in Manchuria by the Red Army. The Japanese knew it was over (that’s why they were trying to surrender) and the allies could have simply waited and blockaded Japan as long as it took.

In other words, there was no need for a land invasion, at all – and if your ancestor had died in one, it would have been his commanding officers throwing his life away uselessly. That’s how war works.

PS – I’m glad your daddy/granddady survived and you’re here, it’s been my pleasure trying to educate you. 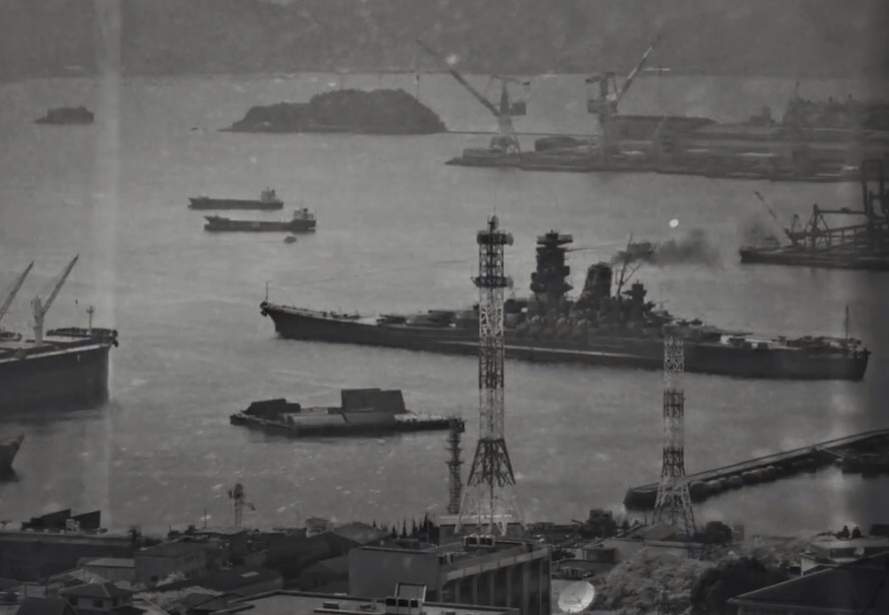 [photo moved from above] I originally illustrated my point about Kure harbor using this image, which turns out to be a photomontage. It still does not change the fact that there were military facilities very near Hiroshima, which would have been legitimate and possibly militarily valuable targets. Or, alternatively, the Japanese troops preparing to defend the Kanto south of Tokyo. They would have been just as effective a “demonstration” of the new lethal device.

This is So Wrong » « Ugly Pretty