I’ve been very busy doing stuff that has to do with the forge, but none of which is forging.

It became time to take a couple steps back and think about infrastructure. Is my safety gear where I need it to be? (No) Stuff like that. One of the nice things about having a workspace that is huge and is not your kitchen is that you can just put your tools down and take a week off.

There’s still a bunch of electrical work that needs doing (the benches need to be wired; I plan to put a long metal shop power-bar under each bench so I can drill through the top and just plug machines in under the deck. There are a lot of screw-ups that involve cutting your own power cables. 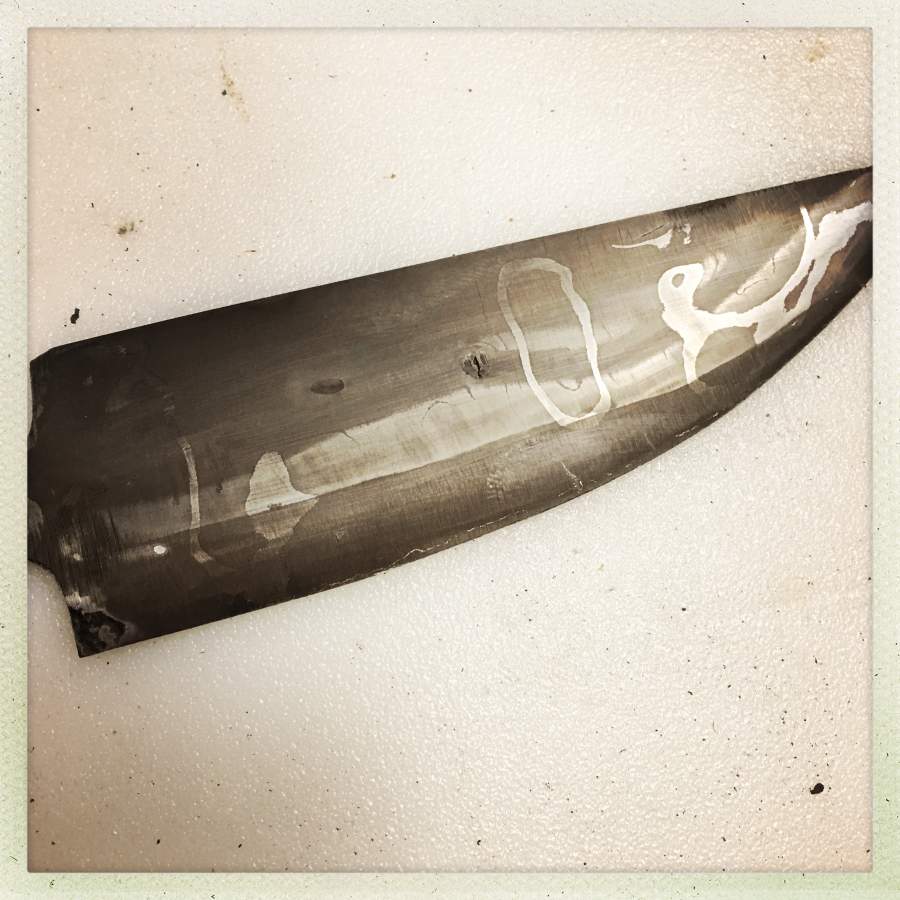 That’s an ugly blade; I did everything to it. But it’s a marker because it’s the first blade I’ve done bottom-to-top: I stacked the steel and forge-welded it, twisted the bar, drew it out, hammered it flat, shaped the blade, then ground it, quenched it, tempered it, and ground, polished, and etched it. All of those processes worked, which is why I’m happy about it. One reason it’s ugly is because I both pulled a temper line out of it by differential quenching, and made it out of different steels. So, it’s ugly but it’s an experiment and all the steps worked.

So, that means I can think about starting to do serious stuff. Which, I started to do and that made me realize that I need to build myself a few more tools. For one thing, I had a design pop into my head for a kind of a specialized grinder that would be rigged for doing hollow-grinds on the back of chisels or cooking knives. I plan to do a lot of those, so I started designing the grinder in my mind, and now I am (slowly) converting that into a set of cut-paths that I can give to the machine shop along with a 1 foot x 2 foot plate of 1/2″ steel – the grinder will fit together like a jigsaw puzzle. If it works, I’ll publish the .SVG file so anyone who wants one can make one.

One of the other problems I need to solve before I do much more is billet size and weight. I want to make sets of blades where the pattern in the steel matches, which means I can’t just make blocks suitable for a single knife. That means bigger chunks, more weight, more problems handling them. So, for example, I get the billet in the forge and at forging temperature and the handle I welded onto it falls off – the billet is too heavy and the welding wire I used had a lower working temperature than my billet. Oops. So, I grabbed it with my 20″ channel lock pliers. 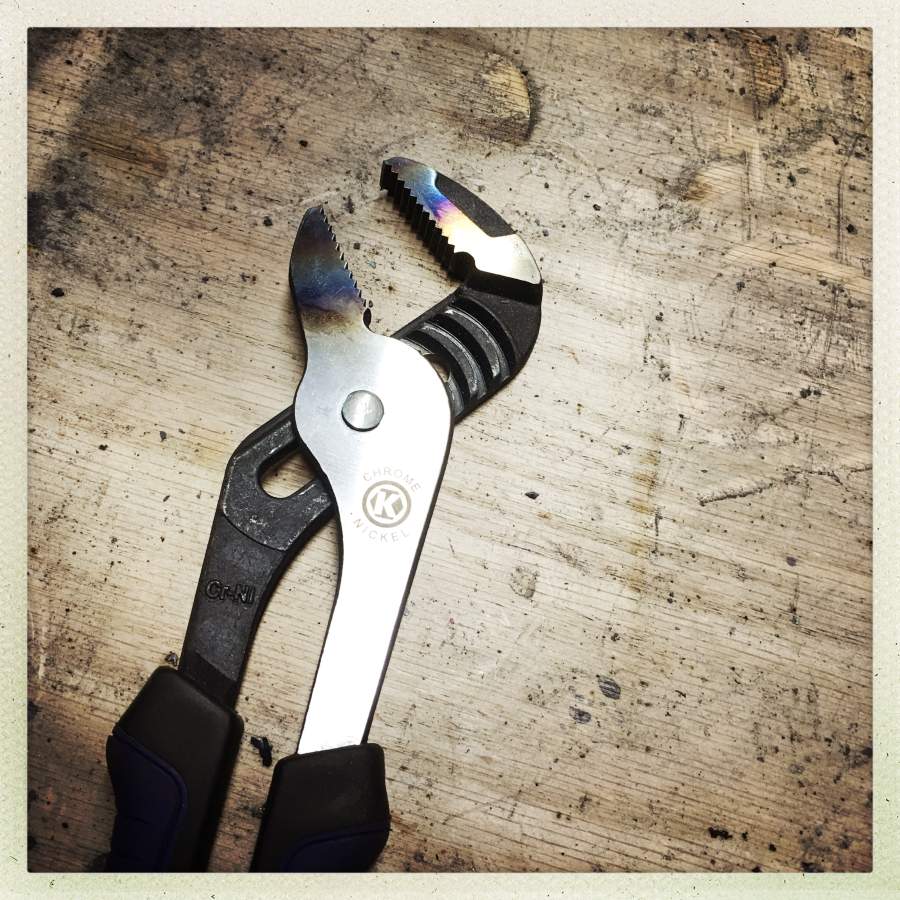 There’s a lot of thermal mass in a 10-lb block of steel, so my pliers didn’t fare very well. The rubber handle covers got kind of squishy, too. So, I’m going to have to make or obtain a set of tongs for 1″ billets, 2″ billets, 3″ billets, etc. That way I can work one-handed to hold the billet and use the other hand to work the press. Having things like welded-on handles that fall off is more dangerous, so that’s not how I am going to proceed. 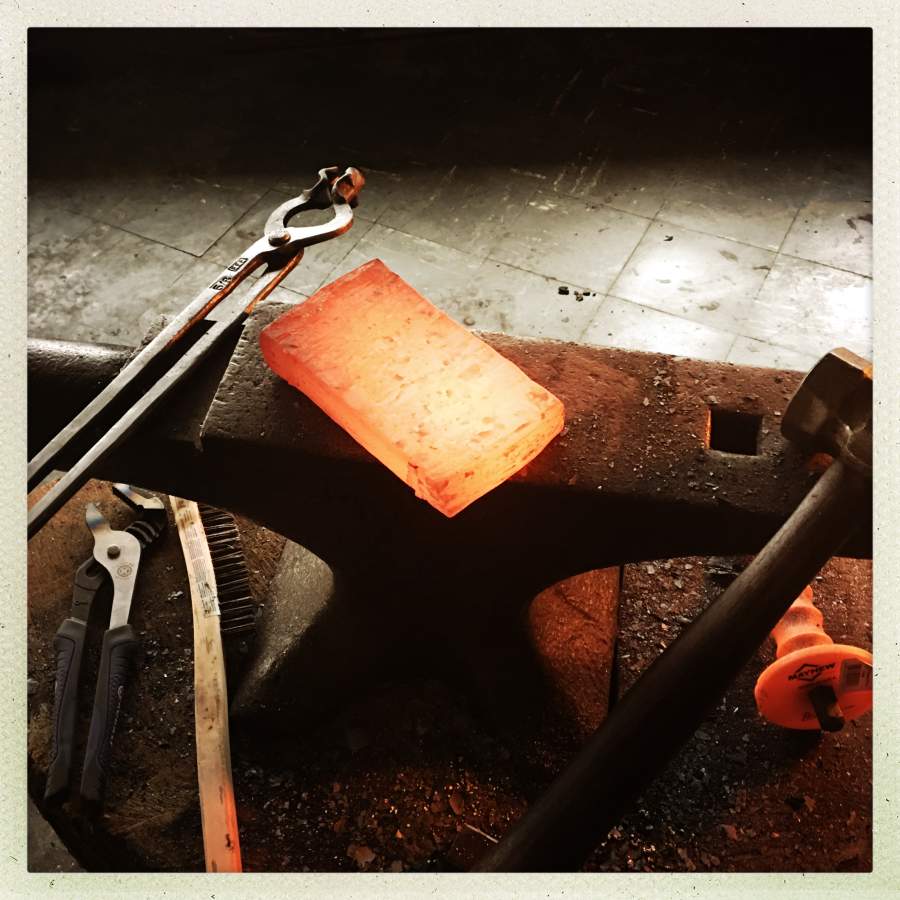 So, my big billet is sitting on a shelf. It won’t go bad or anything. Normally what one would do at this stage of the process is use an angle grinder to remove the welding wire beads so they don’t get incorporated into the metal, and flatten the surface. Then it’d be ready to get cut into pieces and re-stacked, re-welded, and manipulated into a pattern. When I resume working on that block, I’ll post pictures.

Meanwhile, I have a couple smaller test pieces that are looking promising. This is a smaller billet I stacked and welded, with the intent of producing some small utility knives out of it. It’s also a test: those are thin pieces of 15N20 and 1095 sitting atop a piece of Hitachi Blue Paper steel – one of the finest Japanese high carbon steels used for making razor blades. I am going to flatten that some more then cut it in half and use an angle grinder or plasma torch to get it roughly knife-shaped then I’ll see what I can do with it. 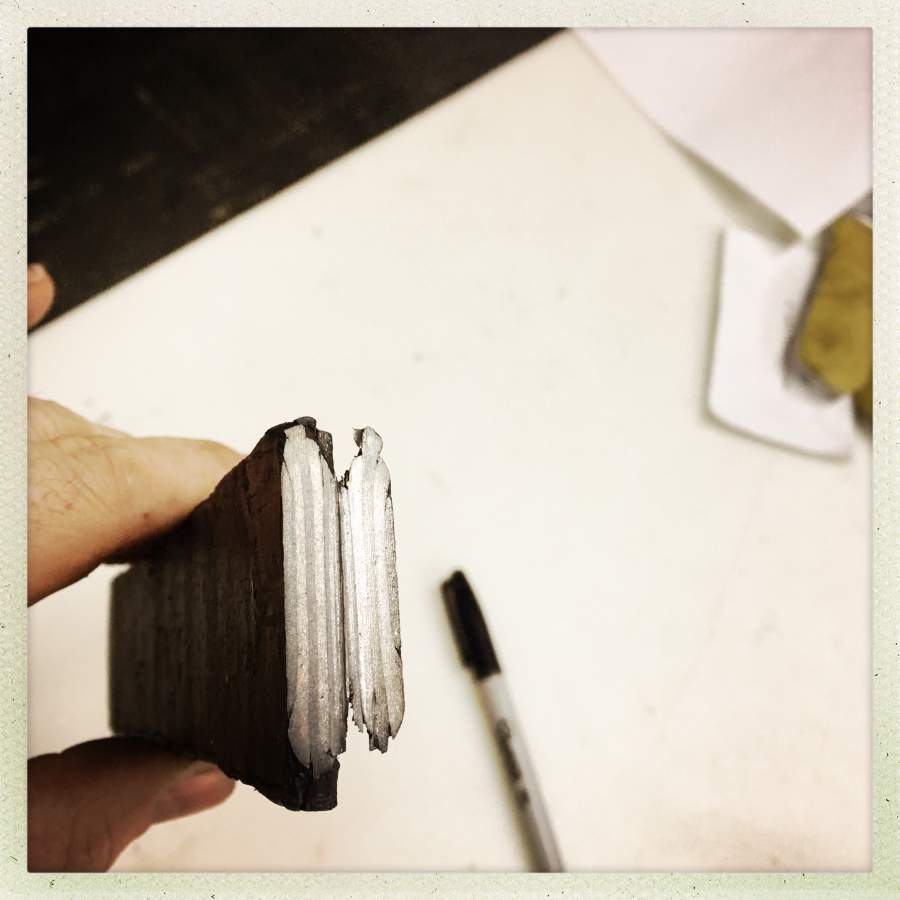 Because the layers are thin I was thinking of doing a technique called “rain drop” where you drill pits in the flat sides, then when you hammer it flat the material re-fills the pits, carrying the different layers of steel into them and making a round pattern when you grind through the layers. I took the bar over to my drill press and gave pit-making a try and my drill bit immediately died. Usually, people who do that technique use a milling machine; now I understand why.

Then there was another bar: 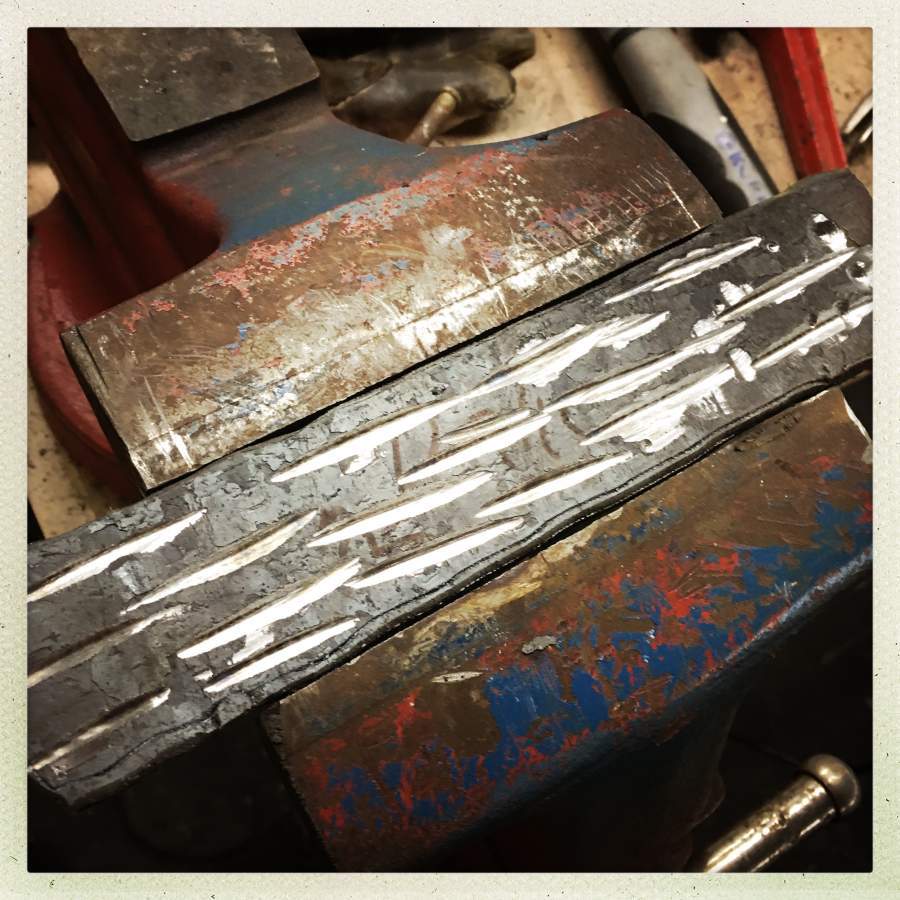 I have no idea what that will look like. But I smashed it flat and it filled the cuts pretty well. Normally, a maker would use a milling machine with a ball end mill, and make patterns side-to-side (not lengthwise) so that when it’s hammered flat you get a sort of ladder-like shape in the damascus. This is just another experiment. It’s a nice hunk of metal, though, and could be coaxed into being a couple of paring knifes. It just needs to be beaten into shape.

So, right now I am standing down while I complete the electrical system of the shop, but also, I started looking around and asking around about metal shop tools. One of the nice things about being in America’s former industrial heartland is there are a lot of factories that shut down in the 70s and 80s and there are a lot of retired old machinists with lathes and such in their garages. A couple weeks ago I began stalking craigslist for surface grinders, and a lovely vintage 1950s grinder came up, at a very reasonable price, south of Pittsburgh. Now I have a 400+lb surface grinder in the back of my car, and I’m going to take Lofty’s advice and get an engine hoist to move it with. I have a couple of machine-moving projects coming up and I’ll write about those if we all survive intact.

One thing that hit me pretty fast: gearing up properly is a safety issue. I spent $500 for the surface grinder but that means I won’t have to flatten my steel bars using an angle grinder (dangerous!) or my belt sander (not exactly safe!) the surface grinder has a nice magnetic chuck and a protective hood around the wheel, and I can just stand back and spin the cranks and my hands will be 2-3 feet away from the action: that’s much safer.

To get the more complex damascus patterns, you flatten, cut, re-stack, and weld your bar. But in order to re-weld it, you have to grind the surfaces smooth and free of the decarbonized steel. Damascus workers spend hours and hours doing this; a surface grinder is a luxury because it’s easier, safer and does a better job.

Oh yeah, the ugly little knife came out about Rockwell 60 hardness, which is also really nice; I tempered it by heating a region in my cat litter bucket using a red hot billet, then when it got to about 400F, I put the knife in there and left it to cool, which softened it a bit and allowed me to bend it straight in a few spots (that goofy pattern in the metal pulled the edge around when I quenched it with an edge-only quench). By the way: I did not put any serious effort into that edge-grind, so it’s atrocious.