Now, when there is a mass shooting incident, a new strategy has begun to appear; it’s a form of “what about-ism” – delaying having to do anything by throwing up a barrage of problems with every possibility that anyone offers.

Some of them are transparently dishonest, like the old NRA “if guns are outlawed, only criminals will have guns” slogan. Others are more subtle; I can’t decide if they are just not thinking very carefully or if they are deliberately dishonest. I’ve taken to tactically re-posting my “From My Cold Dead Hands” proposal [stderr] in various places on FaceBook, and it almost always garners “but what about …?” responses.

As I write in the beginning of the piece,

I know this is never going to happen, because the forces arrayed against the citizens of the US are going to force them to endure this “freedom” whether they want it or not.

This is a matter of throwing ideas out to the internet – I don’t think anyone realistically expects to change minds or influence public policy, but perhaps we remove an objection or strengthen someone’s argument. We imagine we are making a difference, however tiny it may be, and that’s what makes it worthwhile. Otherwise, it’s just moving HTML around on pages that nobody but some search engine’s ever going to see.

But then there are the comments like the one I got last night. I could practically hear the disdainful puffing coming over the distant tubes:
“Interesting suggestion, except that criminals would still have guns.”

Is it worth calling attention to the whole piece where I argued that one of the biggest benefits from banning guns would be that our emergency response diagnoses suddenly gets a lot easier: “someone with a gun: bad” that’s a rule you can teach a kid, like “red means stop, green means go” and “don’t put your tongue in the light socket.”

I had to suck in a deep breath and reply, “at the bottom of the article, I answered your question. If you actually read the piece you could critique it better.”

Of course criminals would still have guns. That’s the bleedin’ point of criminalizing them, innit?

It also ignores some of the interesting demographics of gun ownership – apparently it’s rather lopsided. 3% of the population own over half the guns in the US.

Want to guess how gun ownership breaks along race lines? (If you can, picture it in Howard Zinn’s old Brooklyn accent: “southern. white. men.”) [pew research]

That means that there are some people who spend all of their available money on guns, apparently. (Hang onto that thought; we’ll come back to it.) There are people, like my old acquaintance D—- who once bought 3 pallet-loads of .50cal linked ammunition for his M-1 machine-gun. UPS had to send a larger truck because the little vans they use couldn’t support that kind of weight. By the way, he did get a visit from the FBI but they were asking him (seriously) if he was planning on selling it to drug cartels or something.

The problem is that people like D—-, who are almost certainly harmless, are an unintentional smoke-screen under which the less pleasant weapons-collectors can operate. They’re a big part of the problem, actually, because in order to protect their collecting they’re the ones who keep throwing out the endless “but what about…?” responses. I know because, to a certain degree, I’ve been guilty of that in the past, myself; “I’ve never shot anyone, not even when I was in the army, and I have no interest in shooting anyone now – why take away my entertaining death-spitters?”

Now let me get to the awkward point: the awkward point is that there appear to be a small percentage of people in the US who spend a tremendous amount of money on guns: $13 billion, give or take. [abc] If our hypothetical 3% bought half of those, they spent quite a lot of money. They also spent it in a way that, I believe I have argued successfully, offers them diminishing returns on already dubious benefits. [stderr] It begins to sound like the typical gun-owner might fall down the stairs and break their neck, because they are trying to carry a huge double-armload of weapons they cannot ever practically deploy.

But the awkward point remains that there appear to be some americans that will spend their kids’ college educations on guns; they will spend their heroin money on guns; they will spend the money they could have spent on getting a professional house-cleaner – on guns. They have the money; those AR-15s are expensive, and they get more expensive every time one of them is used to shoot up a school: sales surge briefly. Because the gun collectors are thinking “I’d better buy 2 more while I still can…” I remember when they made high-capacity magazines restricted in Maryland; they “grandfathered” in old ones, so if you already had a collection, you could keep it. Naturally, the price of high-capacity magazines quadrupled as everyone rushed to “grandfather” a few cases. D—- with the .50cal: he warehoused pallet-loads of high-capacity magazines and probably sits atop the pile, like some kind of weird dragon counting his hoard.

Here’s what’s going to happen: you are going to hear lots of calls for throwing black people under the bus. That seems to be white amerikkka’s response to a lot of things – of course it won’t be explicitly black people, it’ll be people who can’t afford jacked-up costly guns, who can’t or don’t want to take the time to get additional licensing, who can’t afford to have a “place of business” (i.e.: become a gun dealer as a way of enlarging their collection, like D—- did) white capitalist amerikkka has declared class war on the poor, and race war on people of color, and raising the cost of guns just plays right into their hands.

So, please, dear reader, when you encounter someone who starts saying “we should make people get proficiency tests and insurance before they can get a gun” point out to them that they are dutifully playing in suit in the class war; they are helping increase the power-differential money brings in this country.

When I talk to “sensible gun owners” (as many style themselves) I point out that their own ideology argues that they should be doing everything possible to arm the poor – to arm them against the police and immigration police so that they can defend their freedoms. They will need high capacity magazines when ICE kicks in their door. They will need gas masks when cops spray pepper gas. They will need body armor and flash bangs, and remote detonators and drones.

You will find that the gun owner is suddenly not as sure of their ideology. If that’s what happens, then their ideology is not what they say it is. 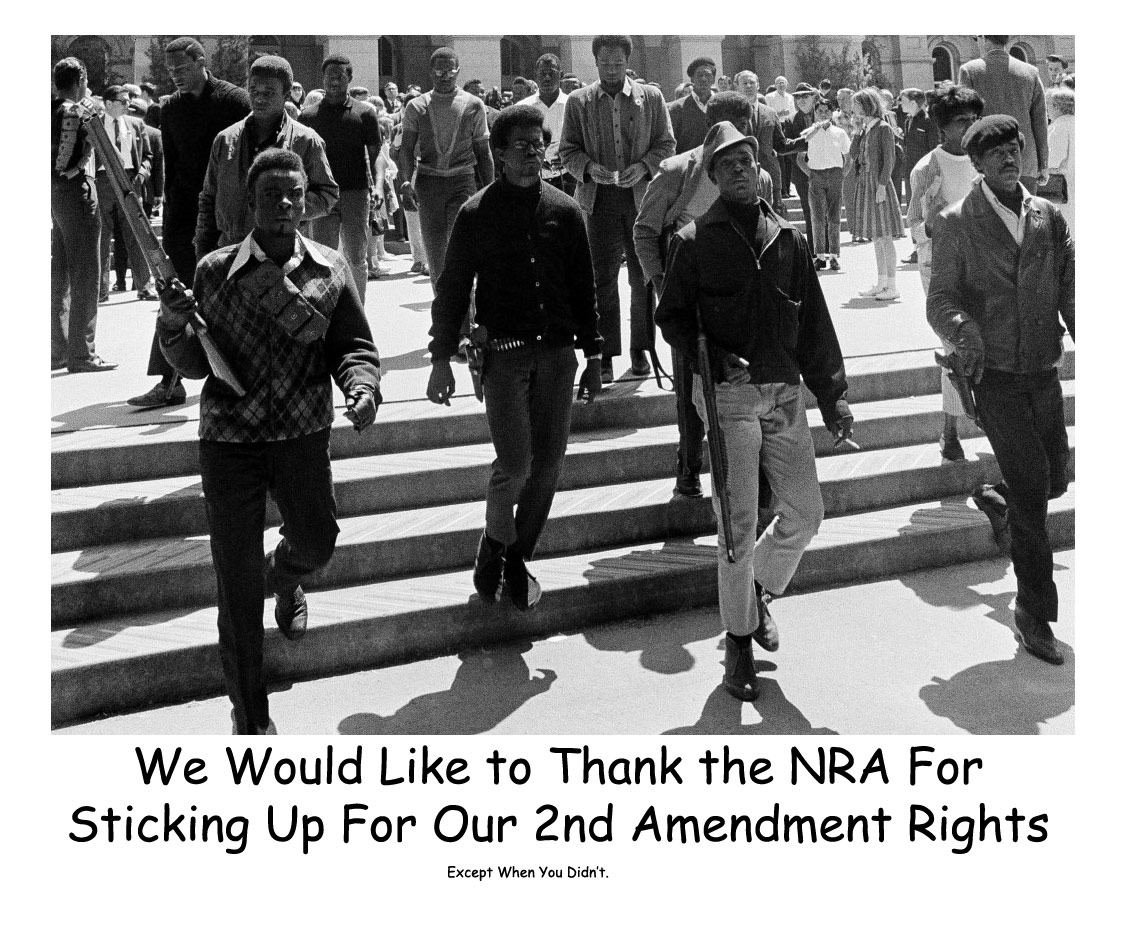 Here’s a closing thought: if we banned the guns, we mostly only inconvenience 3% of the population.

I consider myself a “current but former gun-owner.” I haven’t gotten rid of them yet but they are never going back out on the market. Embarrassingly I’m probably closer to that 3% than not – which is part of why this issue has come to bother me so profoundly. The last time I moved residences, I made an entire run with my GMC Suburban loaded with weapons. Granted, a lot of them were swords and things like that, but it oughtn’t require strategic genius to realize that you can’t use a wheelbarrow-load of guns in any kind of tactical situation that is ever going to arise (unless that situation is “holed up in the house while the FBI surrounds the place and shoots you to bits”).

Give me Fuel, Give me Fire… » « Walkthrough on Making Handle Slabs for Knives