One of The Commentariat(tm) suggested I might want to read Len Beadell’s various works about the times he spent in the outback surveying roads for the Australian nuclear weapons program, and other things. By the time I was a few pages in to Beating Around The Bush [amazn] I was transfixed with a mix of horror and awe.

Beadell’s not as outright silly as George MacDonald Fraser is in his MacAuslan books, it’s a more deadpan delivery, but raises an impossible to categorize set of emotions in me: Beadell is, for example, remarkably matter of fact about series of adventures that I would consider to be “successive disasters” except he handles them. I’d have been on the radio begging for a medevac within the first few pages. Instead, Beadell appears to run around tirelessly fixing things in a great cloud of flies.

When things can’t be fixed, Beadell drives somewhere and gets parts. Or tows something to somewhere where it can be fixed. Most of the book is a sequence of events surrounding a 900km trip through the outback with a bulldozer towing a grader that has a broken transmission, towing a food truck that is towing a large water tank – it’s vaguely reminiscent of Shackleton’s Endurance expedition, except with lots of flies and the occasional bit of amateur field dentistry. Beadell would have fit right in with that lot, and vice-versa; that is to say they’re all the sort of people I would refuse to go anywhere with unless I had a guaranteed full extraction team standing by, and a satellite phone, and a backup, and 2 batteries and backups, and maybe a spare bulldozer.

There’s a lot of attention to logistics, which pleases me immensely – I kept waiting for Beadell to say, “and then we ran out of water and died” except that there’s just enough redundancy and “can do” in his team that it never happens. Someone just drives 800km for a part, in a Land Rover, and turns around and comes back and repairs whatever it was that broke. You need to read that “… in a Land Rover” phrase in a tone of horror because I’m the former owner of a 1966 Land Rover Safari (Baja 7) which, by the time I sold it, was on its 5th or maybe 6th electrical system (I did the last one with 12ga silicone boat wire and soldered and heat-shrinked and silicone glued every connection) I’m sure Beadell and his group could fix Land Rovers in their sleep because that’s pretty much what you have to do, if you ever expect to get any sleep at all.

“This is absolutely terrible!” When I asked him [Quinny] what on earth could possibly have brought this shattering disturbance, he beckoned me to where he was standing in his worn-out, dust-covered sweaty clothes, staring a the rear end of his long-distance supply truck. I left the doubtful shade cast by the tree and brought over my own set of worn-out, dust-covered sweaty clothes, adding my swarm of flies to his. I had stopped my Land Rover in front of his truck, and both vehicles were showing the torture to which we had subjected them since they had last seen a workshop a year ago.

After a minute of giving me the opportunity to discover for myself the cause of his concern by studying me silently from under his battered, oily hat-brim, he asked me incredulously why I couldn’t see what was wrong. My examination roved over the back of his truck from the tailboard to the rear tyres, then back to the shiny towbar and spring shackles, and I had to admit I saw nothing amiss. Quinny’s hat-brim was pulled down so low over his eyes as to half cover them against the white glare of the sun reflecting off the spinifex tops, but now he cuffed it back on his bald, nut-brown forehead and thundered his distressing question: “Where in the blazes is that great caravan I was pulling?”

First, I am impressed that Beadell had a Land Rover that stopped when he wanted it to, rather than just suddenly stopping itself, but secondly I am impressed by Quinny’s sang-froid when he realized that he’d lost an entire vehicle into the unknown. If the story wasn’t told with an underlying chuckle of humor it would be the stuff of nightmares.

At one point, Beadell describes camping at a place he comes to call “Sandy Blight Junction” and tosses out the Lat/Long, which [google map] get you right to the place: 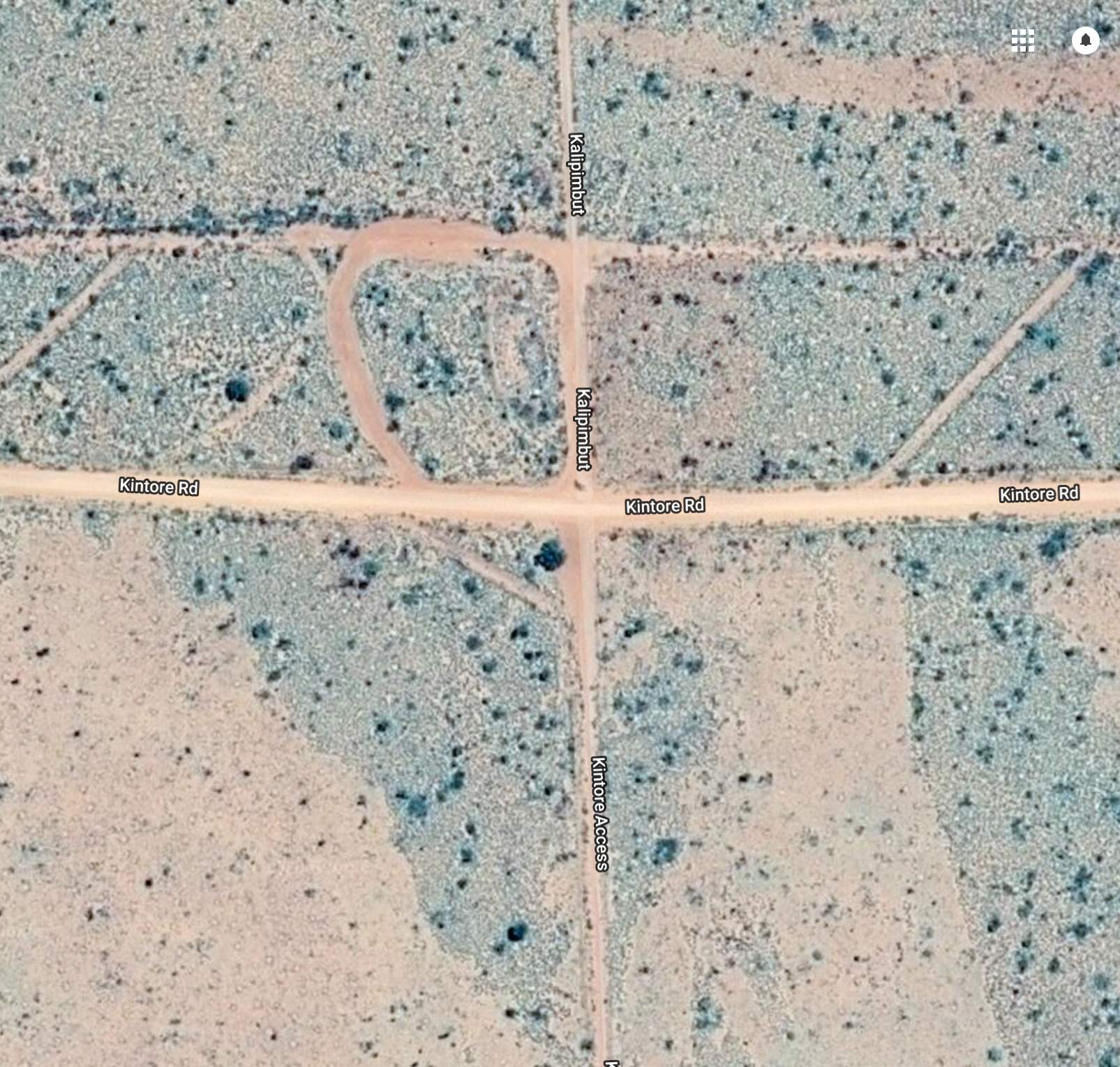 At another point in the story, a supply truck catches fire and burns to the waterline out in the desert. Amazingly, it’s not a Land Rover with an electrical problem causing a fire – it looks like an old military wreck towing a water tank. Beadell describes some of the incident response:

I did hear a bubbling sound coming from the 1400-liter water-tank installed behind the cabin and it occurred to me that we could at least make a cup of tea. The tap had melted so I shot a hole in the side of the tank with my revolver and, finding some tea-leaves among the wreck, filled a billy from the boiling geyser. The sugar in the once-new bulk container had melted, but some could be obtained with a shovel after digging a hole into it with a geological hammer. As we poured out the mugs of tea, each of us was asked politely if he preferred one shovelful or two as a sweetener.

Naturally, I looked for the wreck of the burned-out truck in satellite map, but I couldn’t find it. There’s a lot of places for it to be. A bit more googling got me the GPS coordinates of where it met its weird: [google] There’s a whole lot of nothing there; the truck was moved (presumably dragged behind a bulldozer?) and has been turned into a sort of monument. 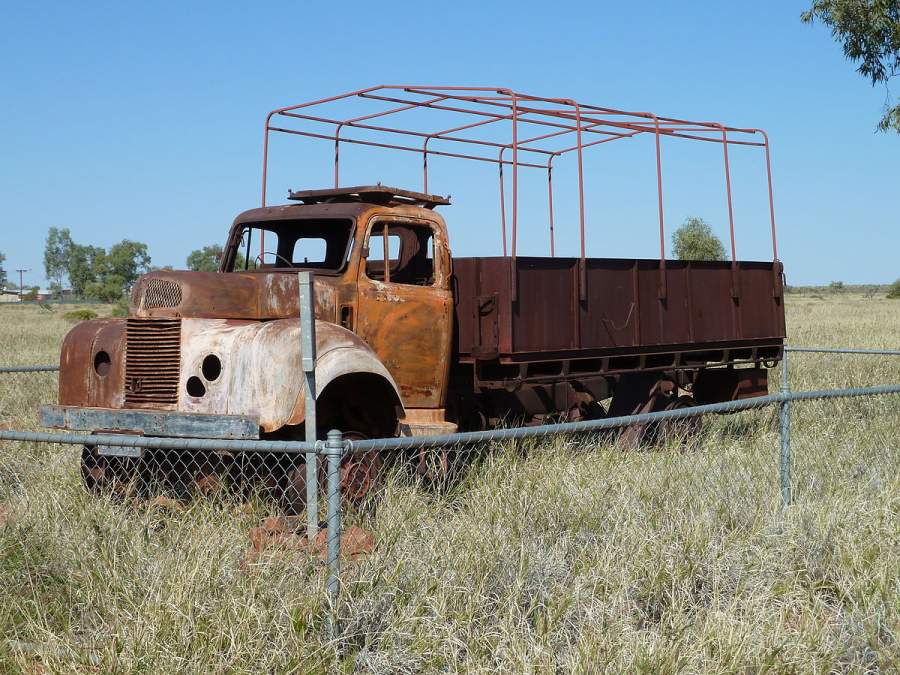 I did find an interesting travel account of someone visiting the area and sending up radiosonde balloons near Woomera. [tb] It includes this tidbit:

I mention to Andy that we were passing the junction of the Old Gunbarrel Highway, which he would like to do, but you need an additional permit for that road and information on my map tells me that you need a minimum of between 2 and 5 vehicles in your convoy with effective communication equipment, so we will have to save that journey for another time. 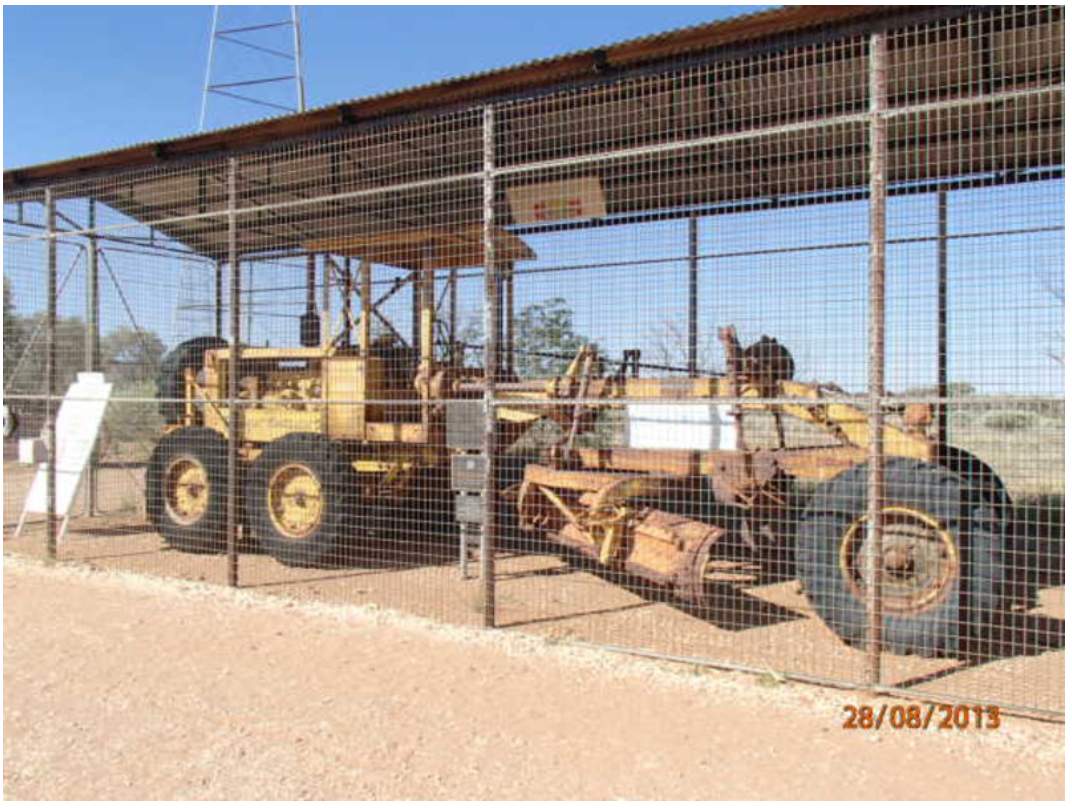 I love this sort of stuff; the left-over pieces of what were very great adventures at the scale at which they happened. 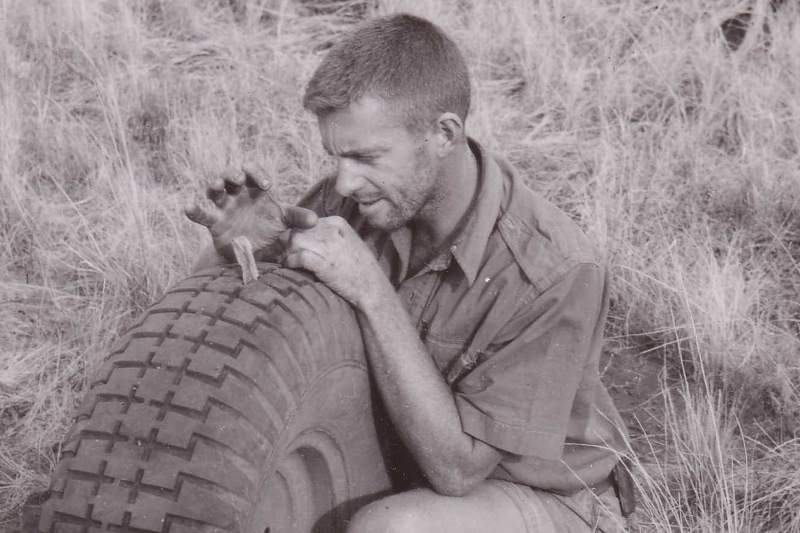 Beadell with a flat tire [source]

Beadell must have been hard as iron; I’ve lifted Land Rovers with the damned bumper jacks those things come with, and changing a tire on one is not fun – it’s about an hour’s work when you’re good at it. At one point he was going through an area where there were spiny trees that left spikes that could go right through the tires – so he had to drive a bit, fix a flat, drive a bit, fix a flat, drive a bit… Nope, nope, no thank you. For one thing, those big fat tires are hellacious to get off a rim and for another, they hadn’t invented tire pluggers yet, and finally I am betting he had a manual pump. So make that a 2 hour process, and it would have been hot work.

After spending all day yesterday dealing with airline boarding processes, customs, and airport security (and a 1-hour delay in JFK airport waiting while they “rebooted” the plane) I feel better about the kind of travel I have to deal with. Suddenly, it seems not so bad.

It’s a good read but I’m not adding it to my recommended list; it’s a specialized interest – for people who enjoy suffering in high spirits.

Dictator Style » « Grow a Tactical Heart From Your Own Stem Cells