Cleaning up some stuff over at the studio, I “eeped” when I picked up a box of stuff that had been sitting for a year or so, and something moved – quickly – in it.

It was a mouse. As I gingerly removed some of the top layers of stuff, it appeared, then ran and dug deeper to hide again. But something subliminally upset me: the mouse looked like there was something wrong with it. I’ve had to deal with mice that have had limbs sliced off by traps, or which had deformities – this one looked like it had some kind of deformity in its hind quarters, like it was dragging something. 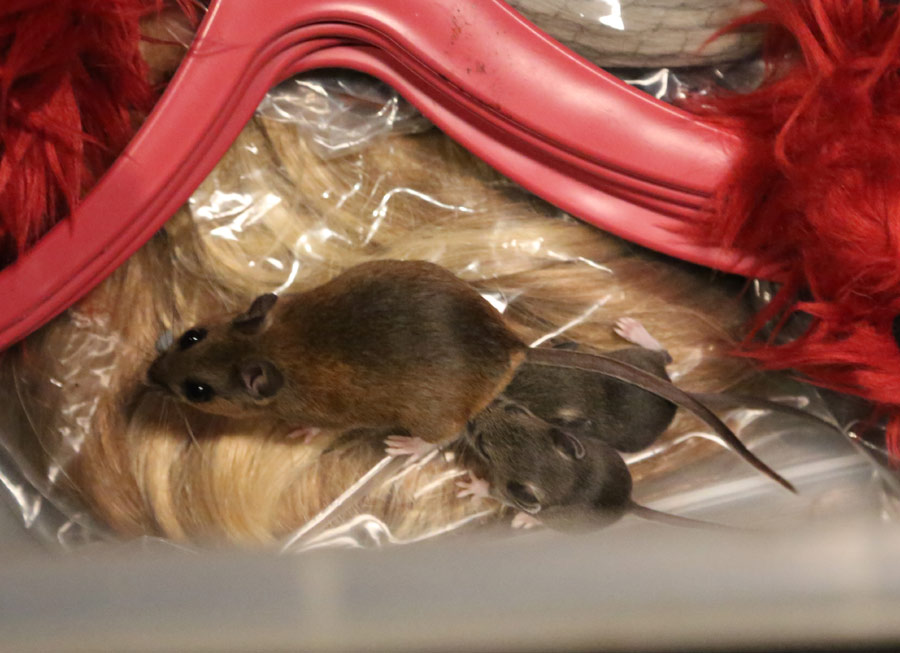 The mouselings seem fine, but they were latched on to something (I assume her nipple?) for all they were worth. The entire family moved as a unit. It looks like the mouselings are new enough that their eyes aren’t opened, yet, or something.

I put the container in another room where it can be left alone for a few months. Unfortunately, madame mouse appears to have pooped and peed all over some of my stuff; but I couldn’t bear to kill her (with what, anyway? a hammer? a b.b. gun?) she and her mouselings will eventually have enough to worry about.

Did you know that mice do this “latch on” behavior? It was quite a surprise for me!

If this is part of standard mouse strategy, it seems like it must limit the size of the litter.

Mice are cute but very inconsiderate of my stuff. I’d be happy to give them a comfortable home (I’d even feed and water them) except that it’d just result in more mice and mouse poops. My house has had no mouse issues since Basement Snake [stderr] took up residence under the freezer chest – he recycles mice like nobody’s business, but he leaves cast skins and snake poops.

By My Sword of Finance!! » « Horrible Death From the Skies is On Its Way