I didn’t realize that there’s a Noah’s Ark near me, at Kennywood Amusement Park outside of Pittsburgh. Unlike the one Ken Ham did, it was a fairly amusing ride, and the science was about as accurate. 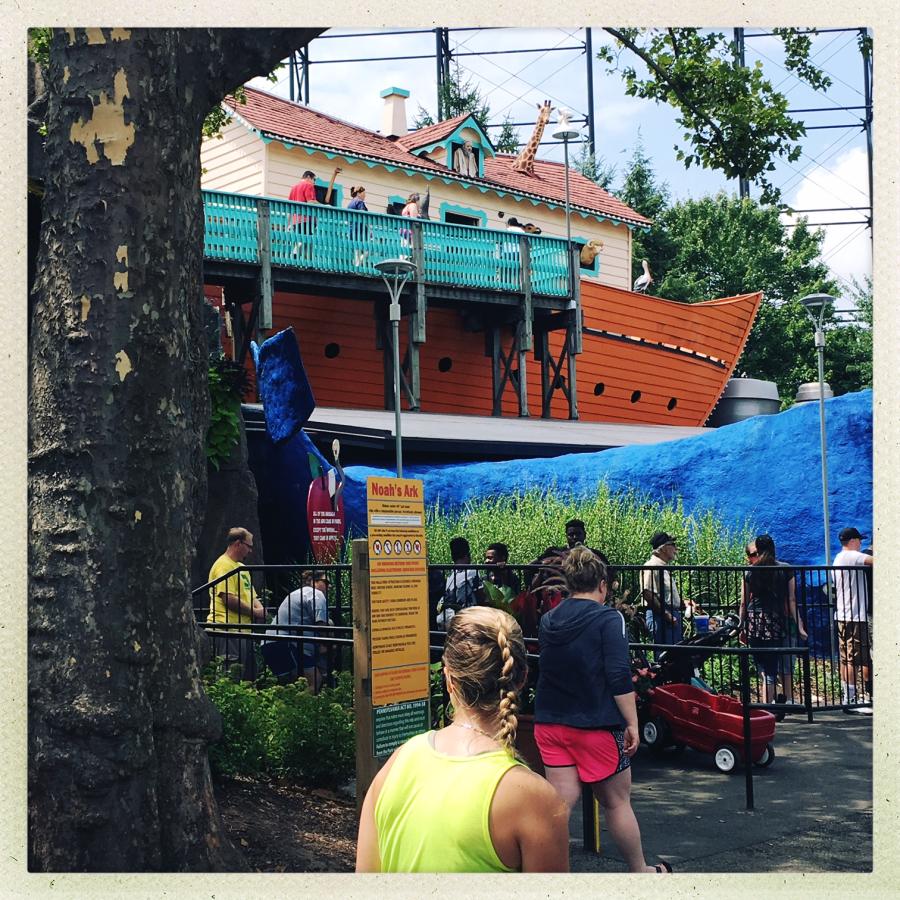 The entire ship rocks back and forth on a central axis. Kennywood was opened in 1899  and was one of the first amusement parks in the world; some of the rides date from the period where being rocked gently back and forth was amazing – before the invention of “air turbulence” I suppose. Though, they had “horse turbulence” so I don’t see the big deal.

I was surprised to learn that giraffes had heads strong enough to butt through the roof of arks, back then. It reminded me somewhat of my own Ark Museum: 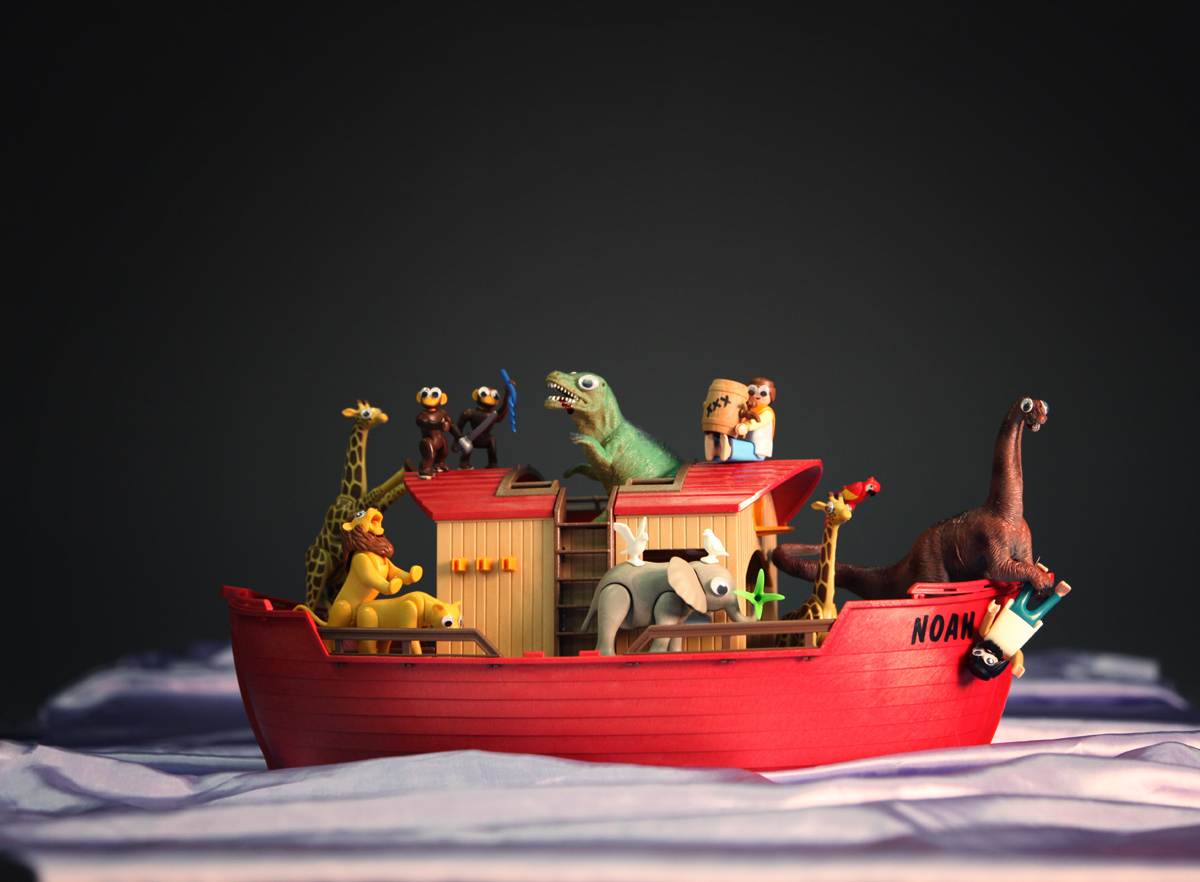 To enter the ark, one must first enter through the mouth of Jonah’s Whale, and be pooped out into the first exhibit. Fortunately, for me, I am fearless about these things. 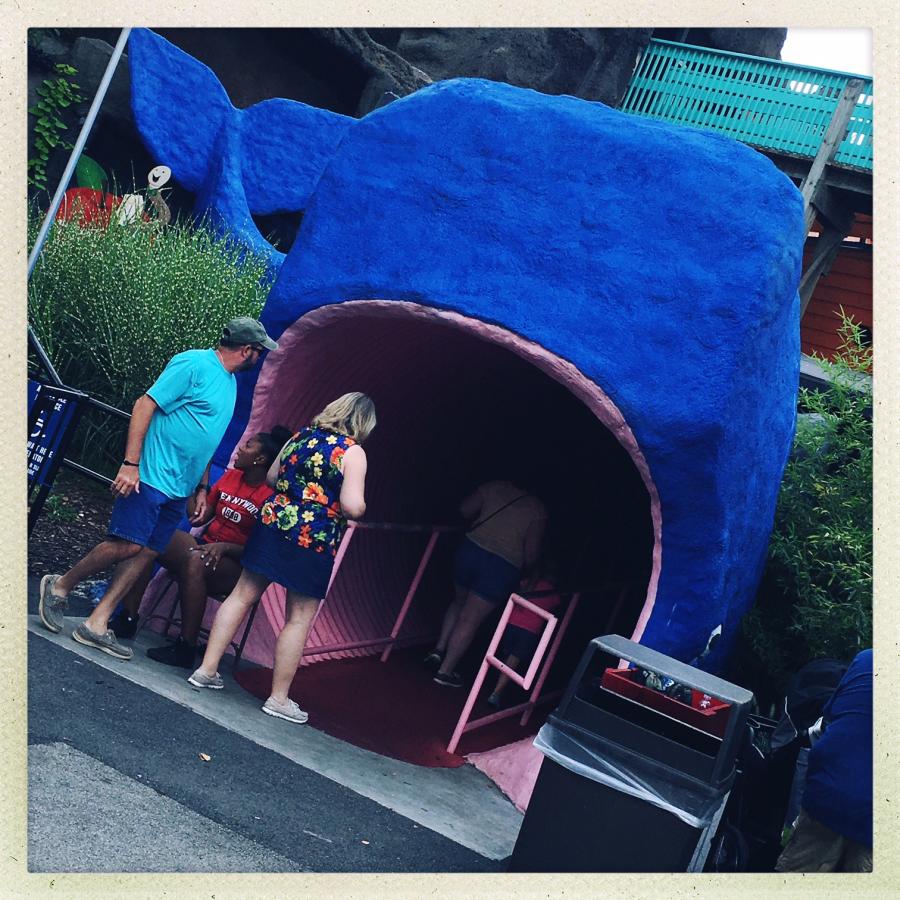 We find ourselves in the hold of the ship. 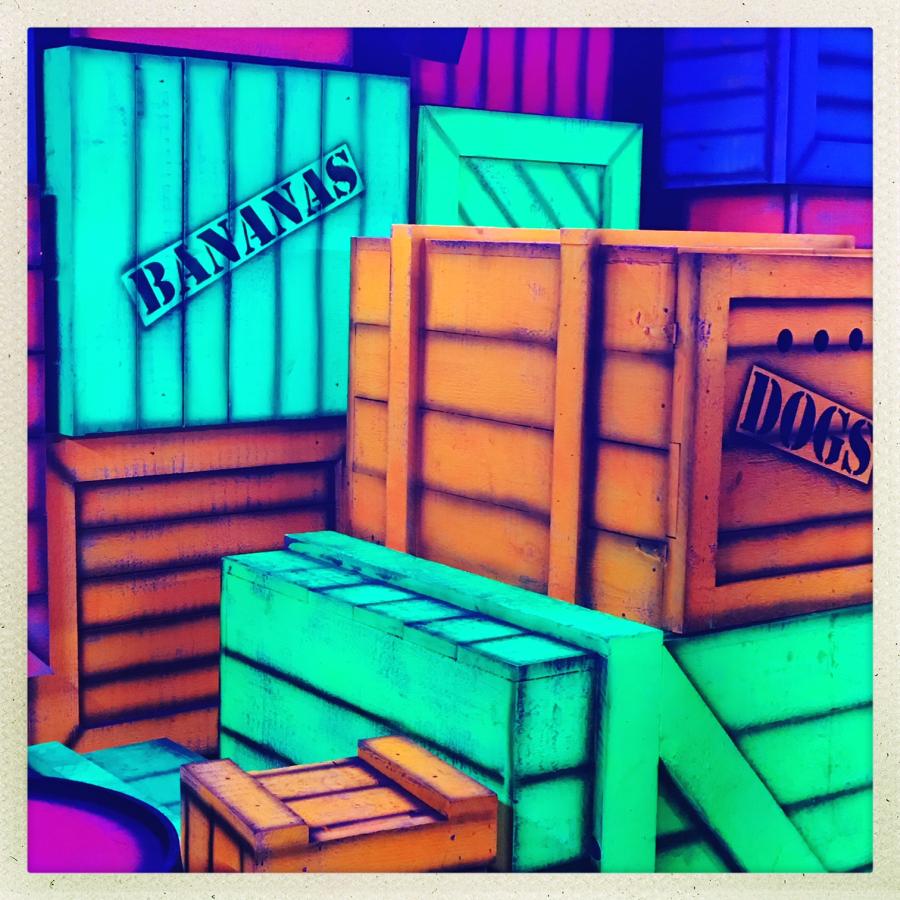 Oh, look, a spare box of dogs! Whenever critiques of Noah’s Ark come up, space and logistics are a common criticism but apparently Noah handled things by painting the boxes with UV sensitive paint and keeping the dogs in a box next to the bananas, so they could … ugh. Poor dogs! 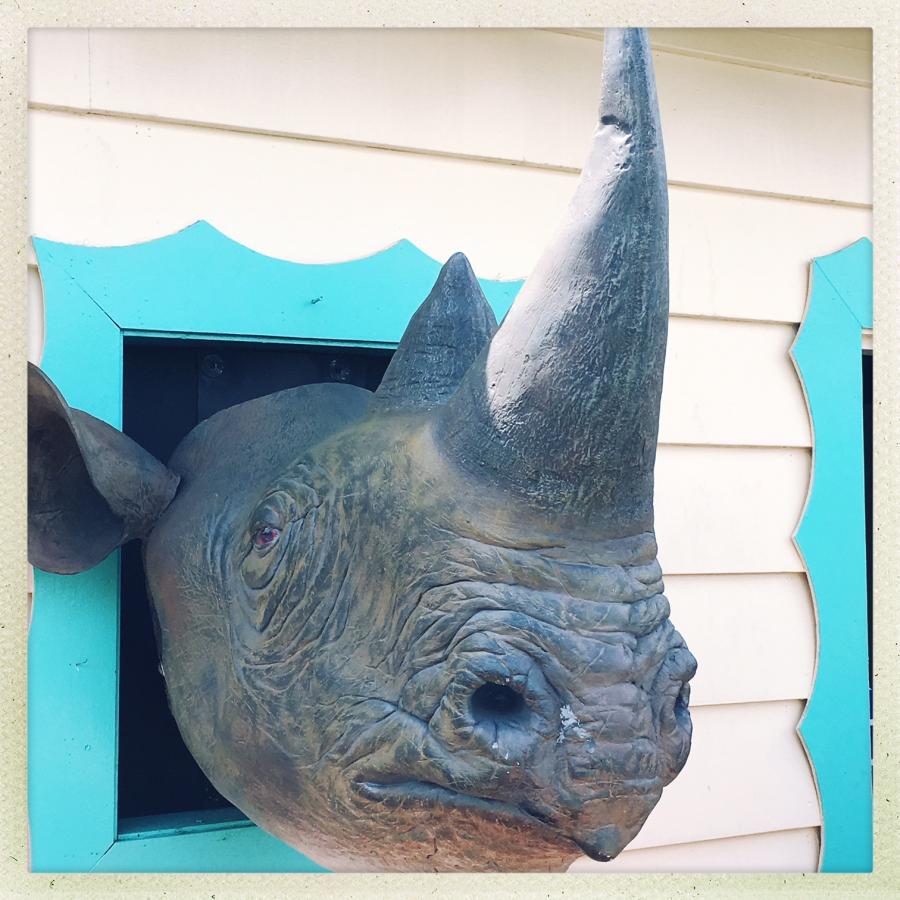 Another brilliant space-saving move, Noah left the Rhino’s bodies behind and just harvested the heads. This is probably where all the victorian hunters got the idea.

We pass through the hold and into the main body of the ship, where a room the size of a toilet stall is occupied by the Captain, Noah, who is portrayed with Mrs Noah standing beside him and slightly behind as is appropriate. As is appropriate for whacking the captain with a frying pan. 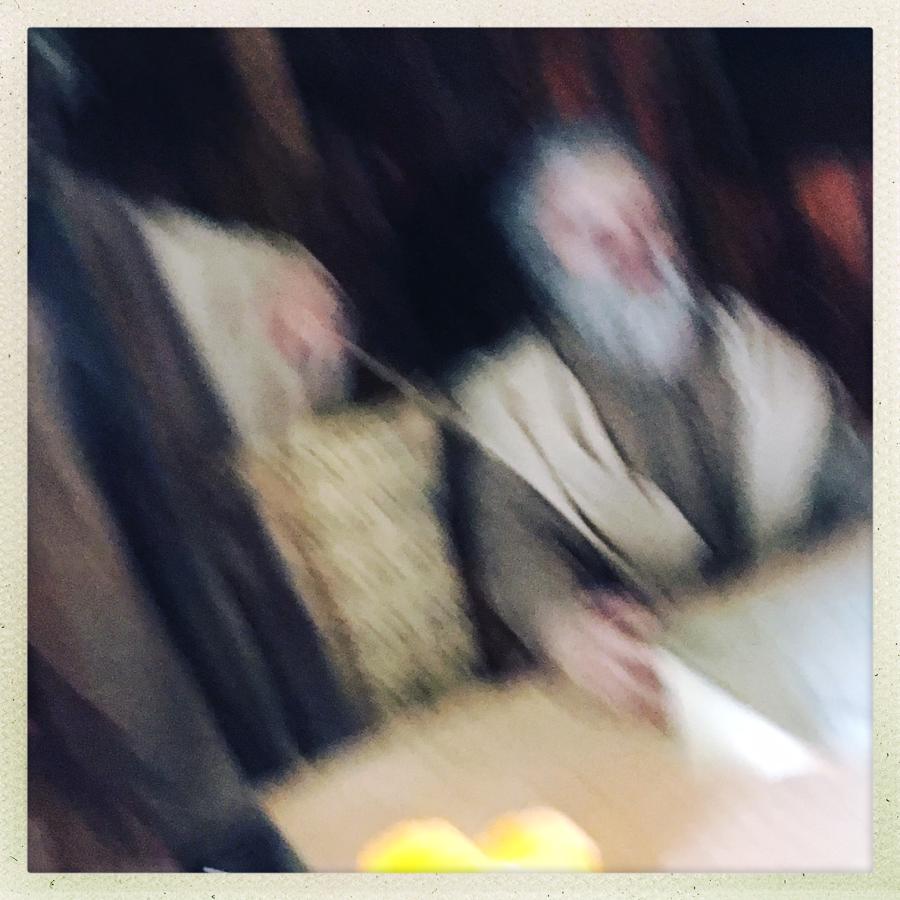 You are probably thinking that picture is unusually bad, even for me, but that’s “art photography.”  No, actually, it’s “photography in the dark” – Noah is so old that he needs to be protected from ultraviolet. If I had my good camera, which sees in the dark, the picture would be fine but then I would have probably launched it from a roller-coaster. One does what one can.

The important science-point here is that the representation of Noah and Mrs Noah is so similar to Ken Ham’s that I’m pretty sure Ham feels it’s plagiarized and unoriginal. Noah is portrayed with a list, covered with names of animals and check-marks. I wish I could have photographed that, because I didn’t see “T. Rex” anywhere on the list.

If you’re observant, you’ll notice that Noah is simultaneously upstairs looking out the window and downstairs, working on his list. Because: Quantum! 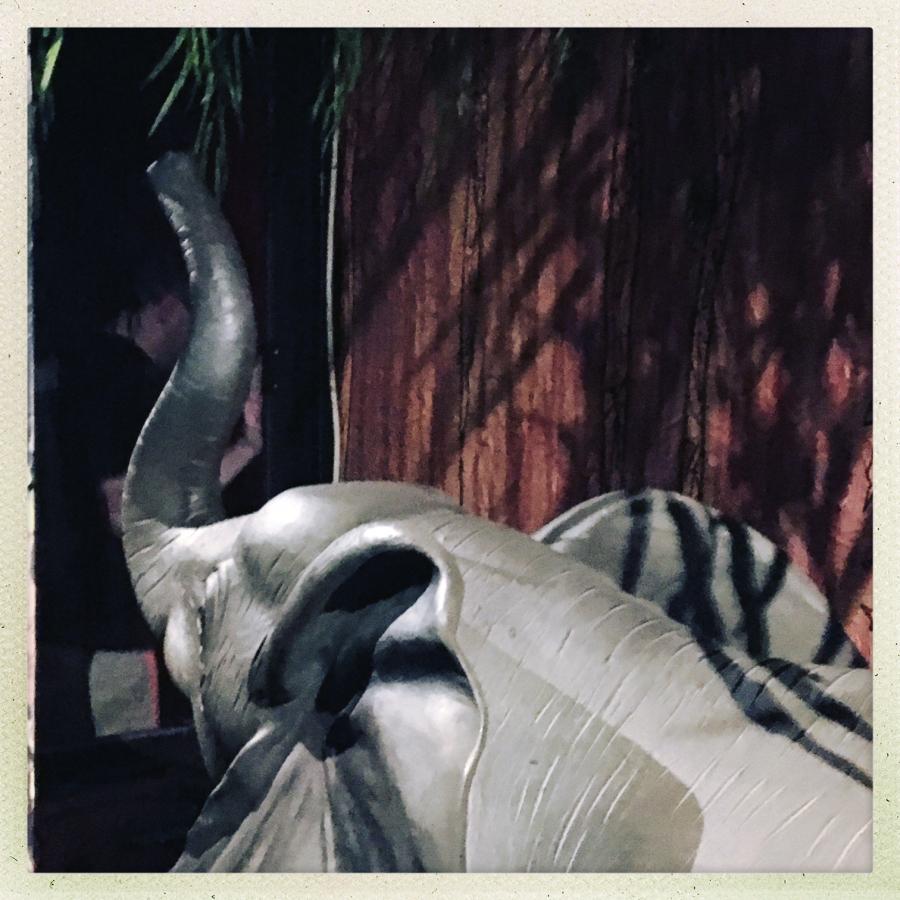 Noah’s solution to the elephants: small elephants. About 3 feet high. This also explains a lot: elephants evolved and got bigger after the flood. 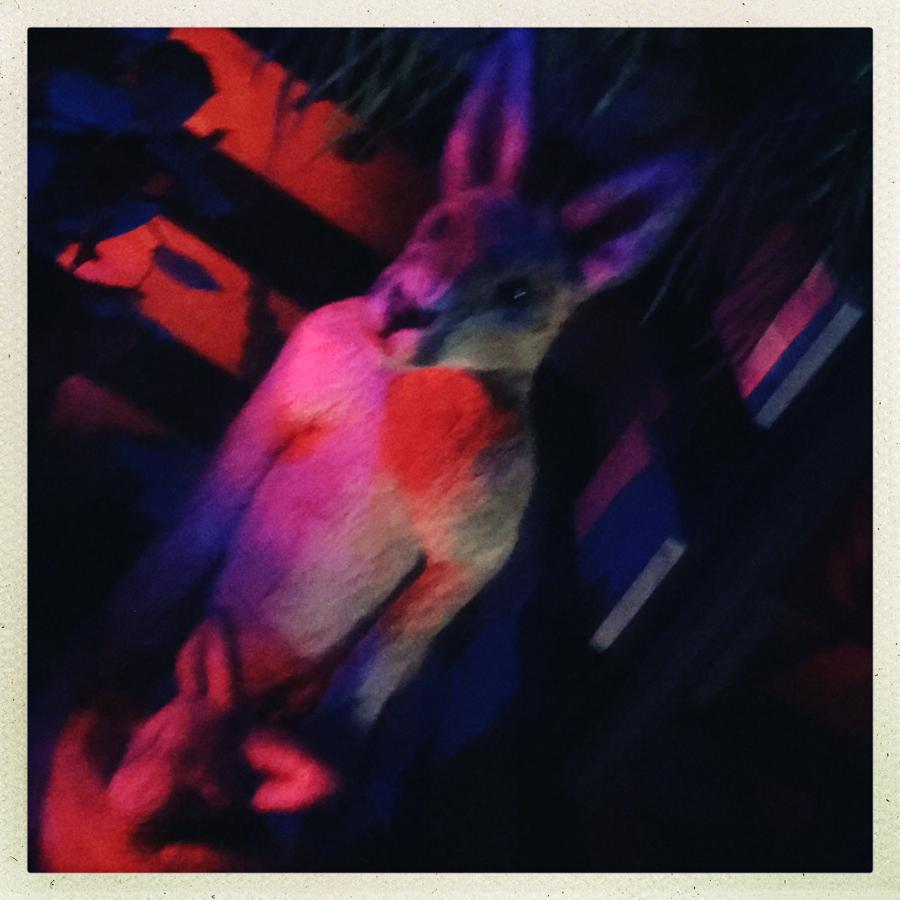 Yes, that’s a kangaroo. With a joey in her pouch. The kangaroo is taller than the elephant in the previous room.

Noah brought 2 kangaroos that were nested together like Russian dolls. But, wait, we’re being trolled! How did kangaroos only wind up in Australia, then? My guess is that Noah must have made a side-trip and dropped them off first, not realizing they were on a really big island. I am sure the indigenous peoples who were there at the time were puzzled by all the sailing about. 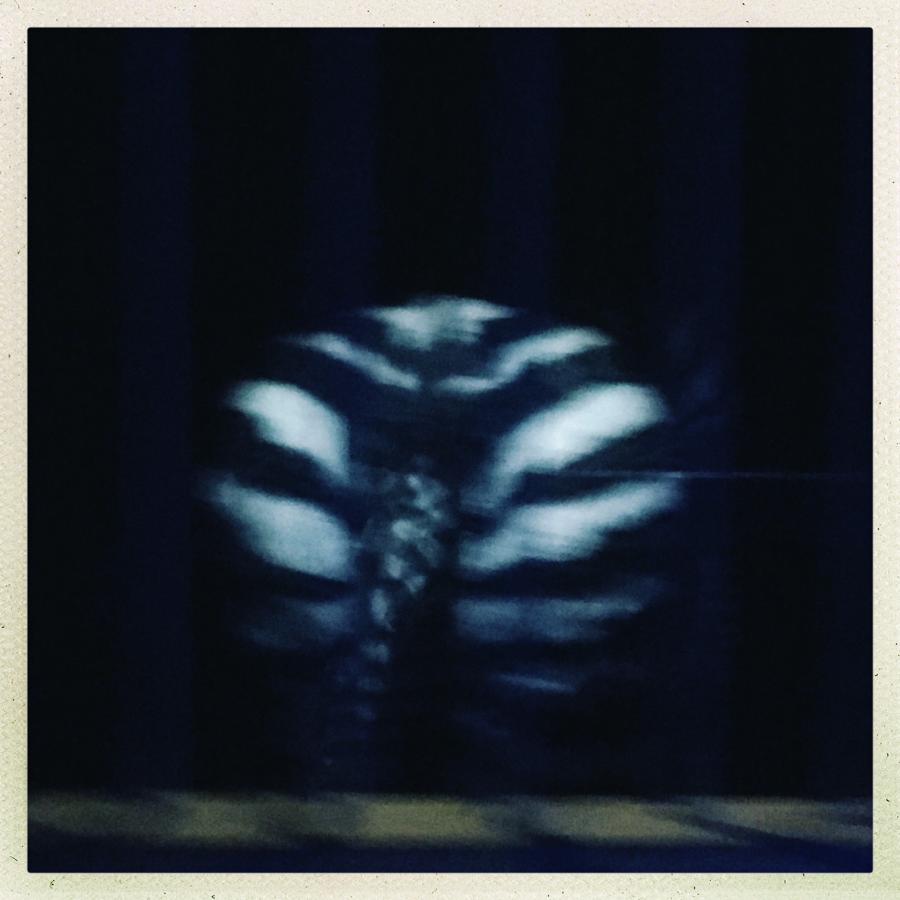 “I like big butts and I cannot lie.” There was a whole room of backends of creatures. I could not match the backends to any of the heads that were mounted on the side of the ship, viking-style. Noah’s compression algorithm appeared to be highly lossy.

The tail was animated and wagged back and forth.

Back in the victorian era, people would regularly fall for things like this, or Piltdown Man, or The Man With Hairy Armpits, or whatever – because animal butts were something new that nobody had experience with, prior.

The next few rooms were fun but I did not record anything of them. The ship was pitching like a mad thing on the waves, as if impelled by a giant cam, or something, and there were some fun-house mirrors that distorted our appearance – I commented “they stole this idea from Snapchat” and a bunch of my fellow travellers snorted Pepsi product out their noses to show their agreement.

There was one disorientation ride that nearly got me – we walked along a narrow plank through a rotating tube that had blinking lights on it. Our brains immediately told us we were taking on water and falling over, so we nearly overcompensated and fell over the other direction. What fun! I wonder how many children emerge traumatized from such rides? Oh, wait, that’s “a typical day playing videogames” isn’t it? 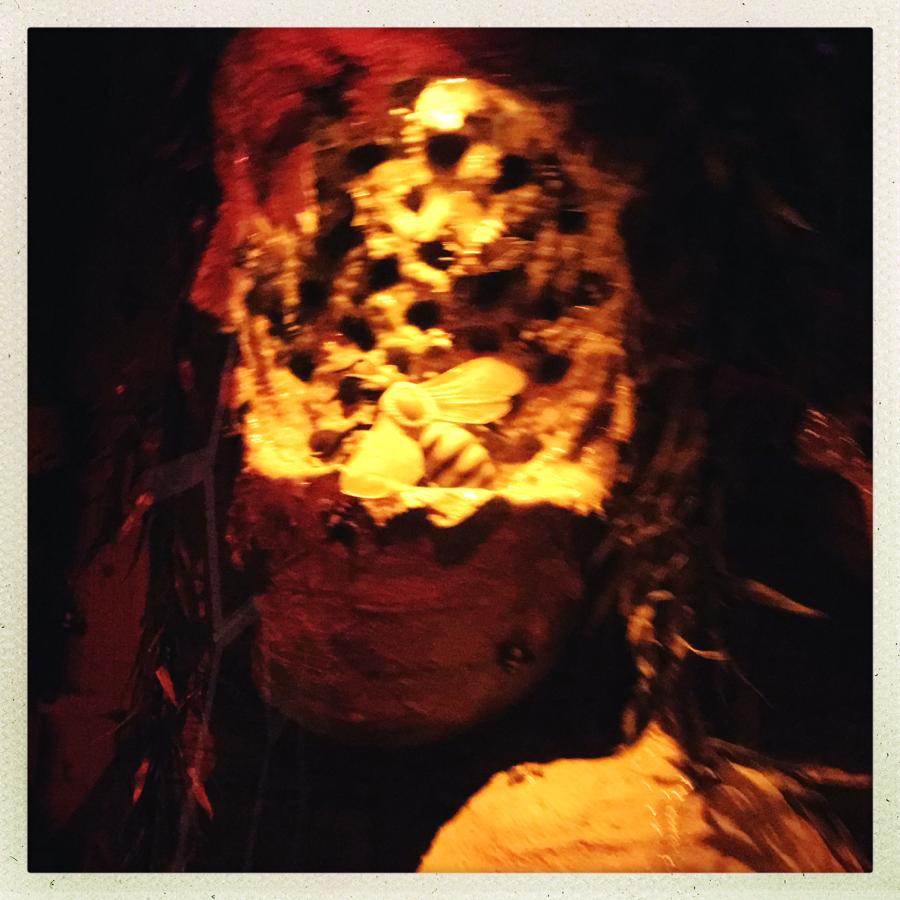 The bees, apparently, were monstrous huge in those days.

The last room, as we exited the ship of fools, was the aviary. I suspect the designers of the ship had throught, “by the time they get here the shrooms should be kicking in, hard. Let’s blow some minds.” There were several ultraviolet Macaws and a Norwegian Flame (shh! he’s resting!) 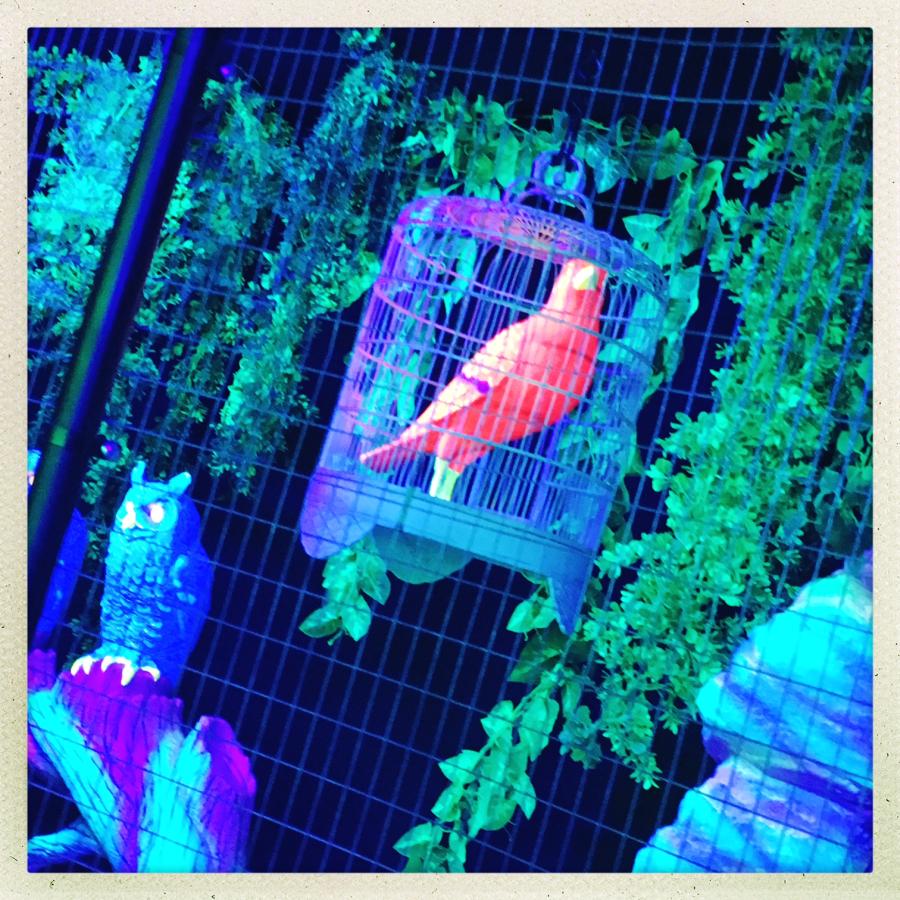 That’s the experience. All in all, it was a bit dizzying and I am glad I had not eaten any funnel cake (yet) by the time I got there.

As we exited, a local volunteer rock band was playing something forgettable, and really doing it hard – they were good, but their choice of music was unexciting. I wanted to go over and ask them if they could do any Joy Division. I’d have definitely done that ride again:

All in all it was as educational as Ken Ham’s version, as scientifically accurate, and it had mirrors that made me look tall, and short, and it jiggled around. I’d say it’s worth the trip, but make sure you time it so the shrooms are peaking when you go through the spinning room. I have no idea what Noah had a spinning room on his ark, but it was really cool to see how easily our brains can be hacked with deceptive inputs.

Teaching the AI to Turn on Us » « AIs and Creativity