Short form: I wish there were more thrillers that had such great lighting, interesting characters, adult plot, and which did such a beautiful job of treading the line between suspension of disbelief and failure to suspend disbelief. If you like action movies, go see it unless you are allergic to 80s music and beautifully choreographed but intense violence.

(very very mild spoilers below the fold; I will not spoil any plot-points unless you are a genius at reading between the lines)

I have to confess I didn’t particularly like Charlize Theron for a long time; that was a mistake. I’m super impressed with where she is going with her career – playing Furiosa in Mad Max, and now Broughton in Atomic Blonde, she’s staking out a unique corner as a cinematic toughie.

It’s de rigeur now, in thrillers, to have an unexpected twisty ending, which I find I usually expect by trying to figure out who’s the least likely person to have done something; it’s a pretty good technique. Atomic Blonde sort of peels away a couple layers from that onion, and I had flashbacks to The Usual Suspects as she’s “debriefing” her story, intercut with the actual sequences. Done badly, that’s a really kitschy way to tell a story. Here, it works. The story proceeds as the pathologically calm Broughton describes what happened, and then we jump into a furious bit of spy-on-spy drama, then back into the debriefing room. Broughton is banged up – extremely banged up – but seems calm, except Theron does a lot of messaging with her eyes and the corner of her mouth – she’s pissed off and hurt and she’s not hiding it. I like that; I am incredibly tired of thriller movies where people get stabbed or have friends shot, and they’re so ‘tough’ they come out the other side as if nothing really happened to them. In that sense, I see a lot of action movies as sociopathic.

Three things stand out about the movie, for me. Maybe 4. I’ll do #4 first: the movie has some great 80’s boots and some truly wonderful stalking in high heels; that’s an artform of its own and there is some 80’s strut in Atomic Blonde that is on par with the opening of Saturday Night Fever. 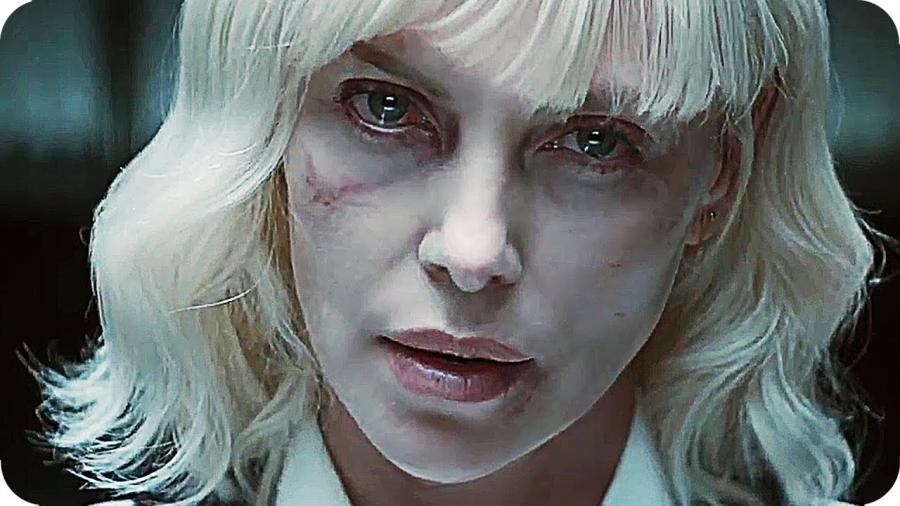 Thing #1: The light. I love light and good cinematic lighting. Atomic Blonde goes for a mix of high-contrast cinematics that make me drool, and cool green dark grays that remind me of Jeff’s room in Le Samourai. Like everything else nowadays it was probably shot on a state of the art RED camera, digital cameras that have such high pixel density and dynamic range that you can take the look of the scene anywhere you want it in post-production, so I never know whether to credit the lighting to the director of photography, or the editor; “it’s all good” though. The movie has a dark gritty popped-out very 80’s dynamic that really works beautifully with the content. I found the titling to be really clever as well. There are some scenes where the camera goes right up into Broughton’s face, so you can see the great job of bruise make-up the makeup artists did, but you can also get lost in the reflections of the lights in Theron’s eyes. We studio photographers often play a game where we reverse-engineer other photographers’ lighting solutions from the pictures (using reflections and shadows and other tricks) and I was happily bouncing in my seat at the simple “single softbox with a horizontal gobo right in the face” high fashion lighting. The director was using the kind of lighting Vanity Fair magazine would use on its cover, for a zoom-in on a bruised and angry bad ass; it sent me right to my happy place.

Thing #2: The fight choreography. I’m a big fan of various martial arts movies and I love a good well-choreographed fight scene. There are a few bits in Atomic Blonde that strain right at the edge of credulity, but it’s all plausible if you’re willing to buy that Broughton is a super hero. She’s not wearing spandex with a dumb logo on it, but she’s fast, clever, creative, and really ruthless. There were moments in the fight scenes that made me flinch as my mirror neurons freaked out from what was going on, on screen. The final fight is probably the best close-in gun battle scene I’ve seen in ages; David Leitch was involved in both John Wick and Atomic Blonde and both movies have the similar choreographed action sequences, except that Atomic Blonde goes for making them slightly more believable (and, hence, painful) and less smooth. You know how, in a Bruce Lee movie, Lee occasionally looks as though he’s decided, “Oh, yeah, I should let the other guy a hit in so people remember I’m human”? There’s none of that, here. Broughton makes mistakes. Then she unmakes them. And it’s messy. You get more of a feeling that this is an intelligent, very fast, fighter who is improvising, compared to John Wick who is like some weird robot doing gun-ballet.

Thing #3: The plot. I enjoyed it. It was complicated enough to keep me thinking and enjoying the process, but it wasn’t a bunch of complete hyper-threaded bollocks, either. I didn’t lose track but if you’re not paying attention, you can. I like that. I don’t enjoy movies where the hero puts everything together documentary-style and everything is telegraphed way ahead of time. There’s some telegraphing but it’s subtle and some of it is head fakes. I enjoyed that a lot; it didn’t come close to being pretentious, and none of it was gratuitous except for in the context of “all cold war badass spy shoot ’em ups are inherently gratuitous.” It had some of the flavor of Snatch or Lock Stock and Two Smoking Barrels – only a bit more complex and requiring less suspension of disbelief.

There were a couple things I didn’t like but they’re details. First off, I don’t blame any costumer getting carried away with the joy of being able to hang outfits on Charlize Theron in a movie. The bustier dress didn’t work; it’s not at all the kind of thing anyone wore in the 80s and it’s definitely not the kind of thing you’d wear when you’re going a’ spying and meeting other spies a’ spying. You’d be better off wearing bright red; oh, she does that too. (And that outfit is pure fresh-squeezed awesomejuice) I think the costuming was mostly hit with a few notable misses. There was also a smallish but annoying thing I consider a tiny continuity error: at one point someone gets shot and “the bullet was a 9mm from a Makarov” OK, pretty much the KGB’s signature handgun, but the guy who got shot was thrown in a river, and the picture the briefer shows is of the casing. The casing usually stays behind where the gun is fired and the bullet stays in the victim. You could determine it was a 9mm probably a 9x18mm but unless you searched the actual location where the shooting happened, you wouldn’t have the casing. You certainly wouldn’t dig the casing out the some guy’s head. It’s a minor detail but it surprised me – everything else was really technically tight, down to the beautiful period reel to reel tape recorders and antiquated bugs.

It was a fun movie. You won’t walk out feeling like you’ve learned anything about the human condition except that the 80s were an interesting time to be in Berlin and that Charlize Theron kicks ass.

Monday Meslier: 189 – Prejudices are but For a Time, and no Power is Durable Except it is Based Upon Truth, Reason, and Equity » « More Trolleyology