I’m not sure what the correct term for this is, perhaps “halo effect” or maybe it’s “transferrence” or just plain old “confirmation bias” but there’s a weird thing humans do, when they notice that someone is knowledgeable about X they sometimes get super impressed and assume that person is also knowledgeable about Y and maybe Z. I think it’s “confirmation bias” – but I’m skeptical of terminology in general.

How do we account for “experts” and “public intellectuals”? I’m willing to grant that someone like Richard Feynman or Ursula LeGuin is brilliant and knows a lot about a lot of things – but I’m also pretty sure they don’t know a lot about everything and, if they were really thinking honestly about any given question, they might reply, “I don’t know.” I was going to say “for everything else, there’s TED Talks” except TED talks are narrow-focused talks by presumed experts in the field that they are talking about. I think it’s pretty reasonable to want to hear what Stephen Hawking has to say about black holes, but asking him a question about economics – maybe not so good. I’d like to think Hawking would be honest enough to say “I don’t know” but you can’t be sure.

The obvious answer is “Don’t treat people as experts outside of their field of expertise” which I would generalize to “don’t assume there are general purpose experts in everything.” Put differently, how much more qualified is Ray Kurzweil to talk about the future than, say, Deepak Chopra?

Another warning flag, for me, is the “over the horizon effect” – I’ll offer it here (since I am a general expert in “effects” of all types!) as:

If someone is predicting something to happen after they are safely dead, ask them about the method by which they predicted the time-frame.

Be especially careful if they want your money, now, and it’s got something to do with something that’s going to happen after they’ve safely crossed the bar.

I am not raising this as criticism, exactly, of Yuval Harari – or Michio Kaku, or Noam Chomsky, or Christopher Hitchens, or any other pundit: I want to know why pundits are a thing. It seems profoundly irrational, to me, to engage in or consume punditry. I know, you’re thinking “…. says the blogger.” Except I hope you’ll notice I try extremely hard to separate facts as I understand them from opinions as I present them. It seems to me as though one achieves punditry when they get tired one night, and just stop waffling and start speaking with great certainty – and the crowd eats it up. This is another reason I am interested in The Authoritarians [stderr] – I used to work with a fellow who seemed predisposed to believe almost anything he was told with a certain energetic delivery, sort of like a baptist preacher’s cant. When I see the way people lap up TED Talks (how do we know those people are really “experts” and they’re not just zooming the audience like Reggie Watts does occasionally)

“… that’s one of the things I enjoy most about this convention. It’s not so much, as so little has to do with what everything is. But it is within our self-interest to understand the topography of our lives, unto ourselves. The Future states that, ‘There is no time other than the collapsation of that sensation of the mirror of the memories which we are living.’ …”   etc.

Reggie’s brilliant and has great rhythm and I’m pretty sure that if you asked him about black holes he’d probably sound much cleverer than Sean Carroll because Carroll would actually have to think about your question whereas Reggie could jump directly to boggling your mind without having to think at all. 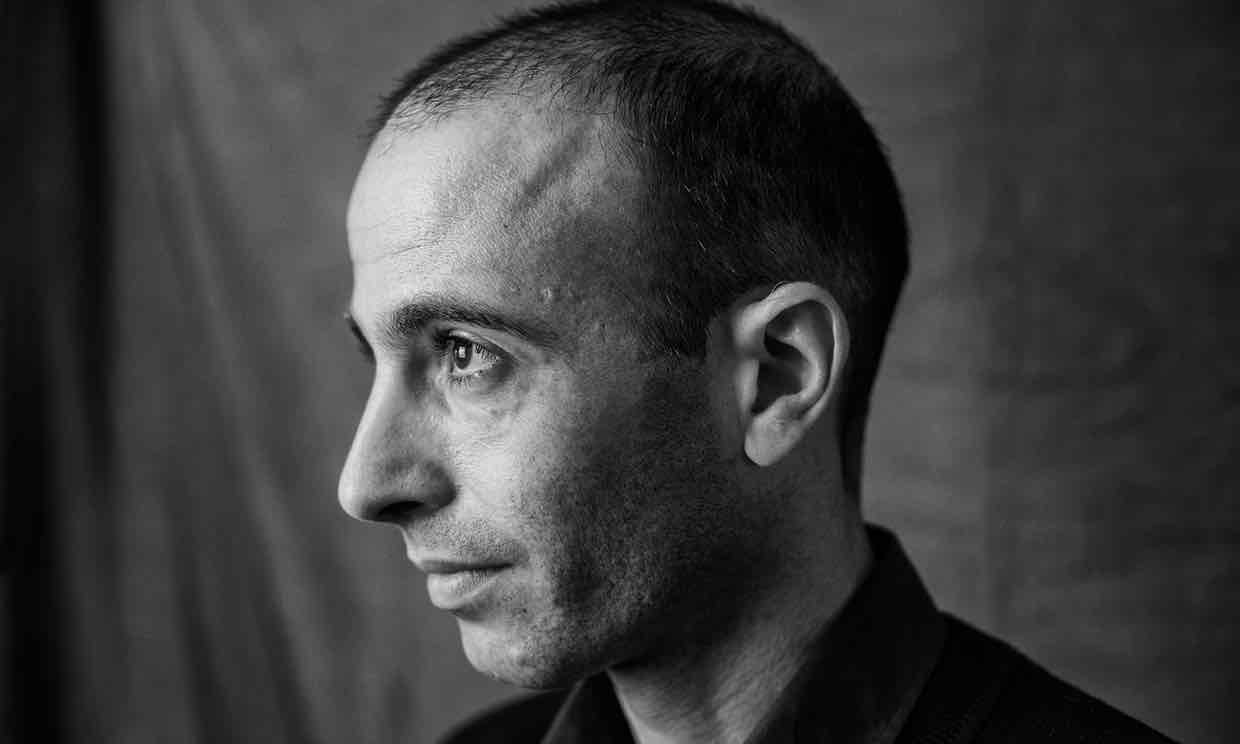 I’m pondering this issue today because The Guardian dropped me a link to a bunch of interviews with Yuval Harari. Now, Harari sounds like a very smart fellow, and has a background in medieval history of warfare – yet he’s written a (by all accounts brilliant) book about the future and there doesn’t appear to be a topic he’s afraid to touch. And the interviewers appear to be willing to ask for oracular pronouncements.

Q: You said that our predilection to create abstract concepts such as religion, nationality etc is the quality which singled out sapiens from other hominids. Given that is also the inspiration for wars that may bring about our destruction, is it a strength or a weakness? (Esther Rantzen, broadcaster)

In terms of power, it’s obvious that this ability made Homo sapiens the most powerful animal in the world, and now gives us control of the entire planet. From an ethical perspective, whether it was good or bad, that’s a far more complicated question. The key issue is that because our power depends on collective fictions, we are not good in distinguishing between fiction and reality. Humans find it very difficult to know what is real and what is just a fictional story in their own minds, and this causes a lot of disasters, wars and problems.

The best test to know whether an entity is real or fictional is the test of suffering. A nation cannot suffer, it cannot feel pain, it cannot feel fear, it has no consciousness. Even if it loses a war, the soldier suffers, the civilians suffer, but the nation cannot suffer. Similarly, a corporation cannot suffer, the pound sterling, when it loses its value, it doesn’t suffer. All these things, they’re fictions. If people bear in mind this distinction, it could improve the way we treat one another and the other animals. It’s not such a good idea to cause suffering to real entities in the service of fictional stories.

Uh, what? Like I said, I’m not trying to pick on Harari – I could just as easily be asking “why does anyone listen to Derrida?” So I thought I’d illustrate my point by going on Youtube and finding some bit of Derrida talking like Reggie Watts, but instead I found a bit where an interviewer asked Derrida a really stupid question (“do you have anything you would like to comment about Love?”) to which Derrida responded that it was a ridiculous question. [derrida on youtube] Then, he goes off, bouncing across the landscape, with Reggie Watts listening appreciatively.

Q: But these fictions often inspire us to do great things. Would an unblinking view of reality create the same motivation?

We certainly need some fictions in order to have large-scale societies. That’s true. But we need to use these fictions to serve us instead of being enslaved by them. A good analogy is maybe a football game. The laws of the game are fictional, they’re a creation of humans, there is nothing in nature that mandates the laws of the football game. As long as you remember that these are just laws that people invented to serve your aim, then you can play the game. If you completely give up these laws because they are fictional, then you can’t play football.

The description the Guardian gives, of Harari’s brilliance, is glowing:

It is a dazzlingly bold introduction, which the remainder of the book lives up to on almost every page. Although Sapiens has been widely and loudly praised, some critics have suggested that it is too sweeping. Perhaps, but it is an intellectual joy to be swept along.

I can haz evolutionary psychology:
The halo/confirmation bias/expert effect: Here’s how it works – when we hear someone telling us something that sounds true and clever, to us, we get a little jolt of pleasure as our brain recognizes the pattern of that thing we already knew, suspected, or figured out. That’s a basic evolved feature of how our brains do pattern-matching and recognition; we are evolved to orient ourselves toward a reward so we reward ourselves for knowing things because that has survival value. “Confirmation bias” is our tendency, then, to orient toward the mental reward of recognition. When we listen to an “expert” who is throwing out a cascade of recognizable but not immediately useful ideas, we get stuck into a reward loop: the more they say the better we feel about them, and ourselves, and the more likely we are to believe that, since they started out simple and being right about a few things, they’re probably dramatically right about a lot of things. Some public intellectuals instinctively use this effect by starting out with a few things that are comprehensible and factual, such as “up is up” and “water is wet” and after their audience have fallen into the reward loop, they have operantly conditioned their audience to believe anything they say. This is how economics works.

Wow, it’s scary how easily you can mash together some fnord fnord and wrap a little pseudo evolutionary psychology around it and it sounds semi-plausible. Quantum! OK, I was kidding about the “economics” bit.

Medieval history of warfare: I haven’t read Harari on military history, but if you’re into that stuff, you might want to read the bits of John Keegan’s The Face of Battle that describe what it was probably like.

By the way, I listed Noam Chomsky as a “pundit” because I suppose I was trying to be fair. Chomsky is a linguist and somehow became a “public intellectual” and public dissident. I think that a lot of what he says makes sense and he cites facts and circumstances backing it up and so, I find myself accepting his world-view to some degree. But – should I?