When I was a kid, the UK police made a big deal out of how they didn’t carry guns, but not anymore. Terrorism is starting to pull the police away from the people and increase the separation between the government and the governed. 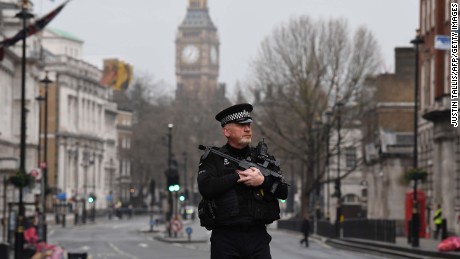 As Bush said (but he didn’t understand it) when terrorists make us react, they win a little bit. Bush was hardly a strategic genius, but even he could see the problem.

Yesterday’s attack in London has some depressing similarities to the attack at Orly Airport.[stderr]

The assailant, who was shot dead on Wednesday as he attacked police officers in the shadow of Big Ben, had been known to MI5 but was considered to be a peripheral figure and had fallen from the intelligence picture.[guardian]

The police and security services monitor about 3,000 Britons, mainly Islamists, whom they regard as potentially capable of domestic terrorism. Of these, about 500 are the subject of active investigations and only a limited number become the targets of physical surveillance. The Guardian understands the attacker was not one of them. He was regarded as posing so little threat that he did not even make the list of 3,000.

If they’re monitoring 3,000 people (500 actively) they’ve got a snowflake’s chance in hell of stumbling across a planned operation, and even less chance against an extemporaneous attack. English security services are going to be asking for money – lots of money – in order to boost that number. It still won’t help: in fact, someone could easily launch a resource exhaustion attack[cyberinsurgency] against the security services designed to make their capabilities more expensive and less effective by overloading them. Every one of these attacks costs lives and sucks millions of dollars out of the target economy.

A European security official said there was increased chatter on jihadi networks Tuesday following the UK’s adoption of an electronics ban aboard flights from certain mostly Muslim countries. At this time, the official said that there was no information that the incident was terror-related. [abc13]

Rounding up the attacker’s friends and associates makes sense, and it’s what the French police did after the 2015 Paris attacks [saint denis raid] and what the US did after the 2015 attack in San Bernardino [wikipedia]  and the Boston bombings, etc. The retro-scope is really good for that sort of thing: what it can’t do is predict the next attack. If the massive intelligence collection apparatus is only capable of flagging people who then fall off the radar screen, what good is it? I suppose the surveillance cameras are good at collecting footage of the incidents when they happen, but living in a surveillance state probably makes people more prone to snap, than otherwise: it tells them over and over “This is not your society. We owe you nothing. We don’t trust you.” It is no coincidence at all that militant recruiting videos are featuring Donald Trump.

Preventing immigrants from entering the country won’t prevent this sort of thing. The attacker in Paris was French-born, and the attacker in London was born in England. Nativists are going to have to start changing their chant to “keep out immigrants and anyone who hasn’t been here for 3 generations!” (it’d have to be 3 not 4, otherwise President Trump would be on a boat back to Germany and I suppose I’d be on my way to Norway again…)

Arming people isn’t going to work: “good guys with guns are standing around waiting for bad guys without guns to grab them, and then they’ll have guns.”

This is a complicated problem, and none of the responses that governments typically engage in help, at all. After the 2015 attacks in Paris, France launched air strikes in Raqqa, which probably did a lot to convince people that the French government did, in fact, want to kill muslims. Here’s hoping the English reaction is rational and measured.

During the height of the Paris student riots and the near-coup in France in the 1960s, my dad walked up to a French policeman to ask directions and the cop whipped around and pointed a submachinegun in his face. I don’t remember the incident but apparently I was riding on his shoulders at the time, and the gun was pointed right at me, like the cop thought I was a bomb, or something. The French police in those days wore these short waist-length blue woolen capes (I had one for a long time until mold got it) and my dad didn’t see that the cop was heavily armed. I’m sure the cop probably wasn’t really ready to skeet-shoot the American kid off his fathers’ shoulders – the gun was probably not loaded – but it left an indelible impression on my dad. The point is: this is nothing new. Scared police become dangerous and dangerousness feeds back until it goes out of control, or someone de-escalates. Since ISIS has nothing to lose, don’t expect them to de-escalate. 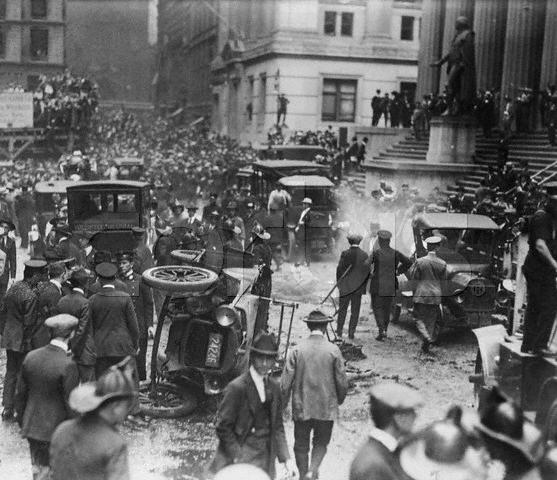 Growing up in the 70s and 80s, I remember the Red Brigades and Baader Meinhoff and the Symbionese Liberation Army. [m] As people become detached and disaffected from “their” government, the level of apparently random violence will increase. The US political establishment doesn’t seem to understand that, in spite of the US’ long history of domestic unrest over economic inequality and capitalism’s tendency to bring violence on labor. If you’re interested in this topic, you may want to read American Lightning [amazon] – Spoiler: the idea of blowing up Wall Street is a pretty old one.

I am not saying I approve of any of this. But it’s an inevitable consequence of political and social inequality, and those who are dead set on seeing the divide get deeper need to understand that’s what they are choosing.

I can’t tell what the brit cop is carrying. It looks like an airsofter’s junked-up version of an MP5 PDW. At least there’s no clip in it. Elsewhere I see lots of pictures of brit cops carrying MP5Ds with clips in them. What the fuck kind of firepower do these assholes think they need in sleepy London town? This is not Aleppo. Yet.