The present births, supposedly, the future. Events are chained, one another, by an invincible fate; it is this destiny that, in Homer, is more powerful than Jupiter, himself. 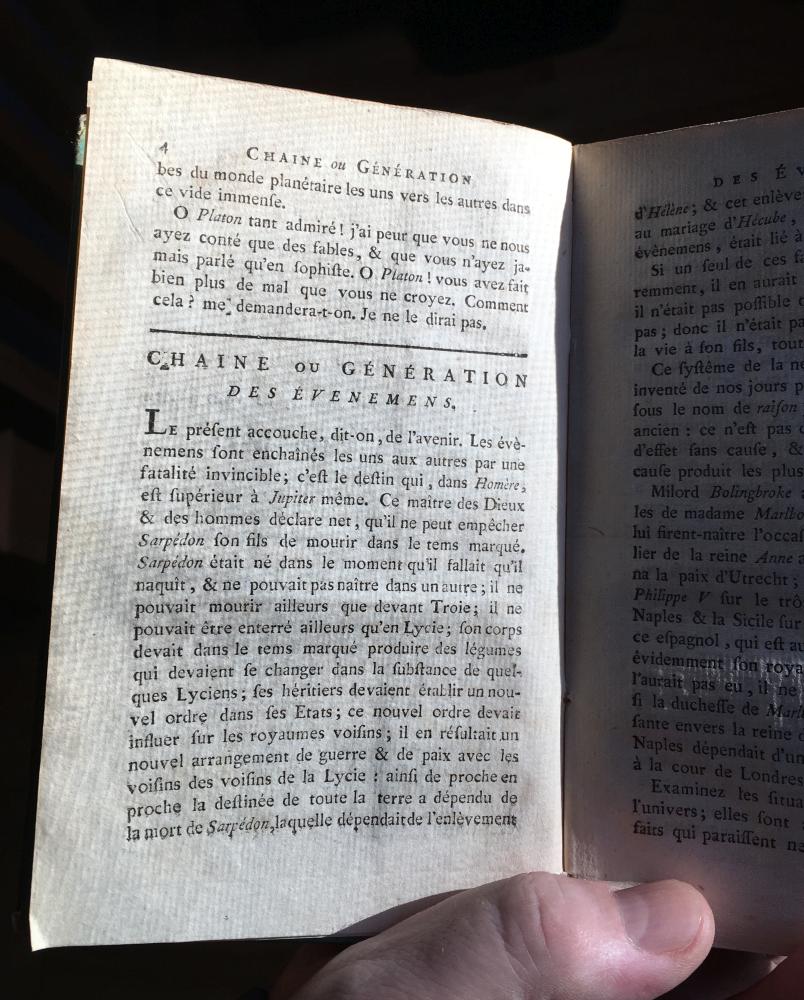 The lord of the gods and men declares that he cannot stop Sarpedon, his son, from dying at the appointed time. Sarpedon was born at the moment he had to be, and could be born at no other; he could not die anywhere but before Troy; he could not be buried anywhere other than in Lycia; his body had to, in the predetermined time, put forth vegetables, which were due to change into the substance of Lycians; their heirs had to establish a new order in their state; this new order was due to influence the surrounding kingdoms; this resulted in a new arrangement of war and peace between the neighbors and the Lycians: thus from event to event the destiny of all of earth depends on the death of Sarpedon, who depended on being raised by Helen; and his being raised depended necessarily on the marriage of Hecuba, who, before the other events, was linked to the origin of all of these things.

If one of these facts had arranged itself differently, there would have been a different universe; it is not possible that the current universe would exist; thus it was not possible for Jupiter to save the life of his son, despite being Jupiter.

Voltaire here adopts the view of causality that has been fairly obvious to humans for a long time: things happen in this complex chain, and if you change the chain at the beginning, the end will always come out different – sometimes dramatically so. My view of cause and effect is that it is not a chain – it’s a complex mesh of all the causes and all the effects – the human tendency is to simplify it and treat it as a chain because we lose track of its complexity too fast to even think about. It’s fractally detailed at every scale and we can no more rationally say that it was Sarpedon’s mistake to wear Achilles’ armor, than to say that Patroclus could have been more perceptive. There is no single one thing we can identify as the cause, because all causes in the chain are “the” cause, as are all the causes that form the mesh surrounding any event. It makes sense that we flatten the complexity down to simple chains: otherwise our reality would be too complicated, we would be unable to do anything. Ignorance, in other words, really is bliss.

My favorite story about causality illustrates the foolishness of trying to manipulate it:
One day, a nobleman in Badhdad saw Death, stalking through the bazaar. Somehow, he felt certain that Death had come for him, so he hastened and called his groom to ready his fastest horse, and galloped out of town to Samarra, where he had a safe, palatial, estate. Death was interrupted as he moved through the market, by a young boy, “O mighty lord!” said the boy, “I recognize thee. I hope you are not here for any of us!” “No,” replied Death, “I’m just here to buy a horse; I have a meeting in Samarra tomorrow that I can’t miss.”