She was the first Soviet citizen to be welcomed to the White House. There are pictures of her, smiling with Eleanor Roosevelt, in her Red Army dress uniform; the uniform is simple, not a beribboned affair, but one of the medals on her left chest is the plain star of the Hero Of The Soviet Union. 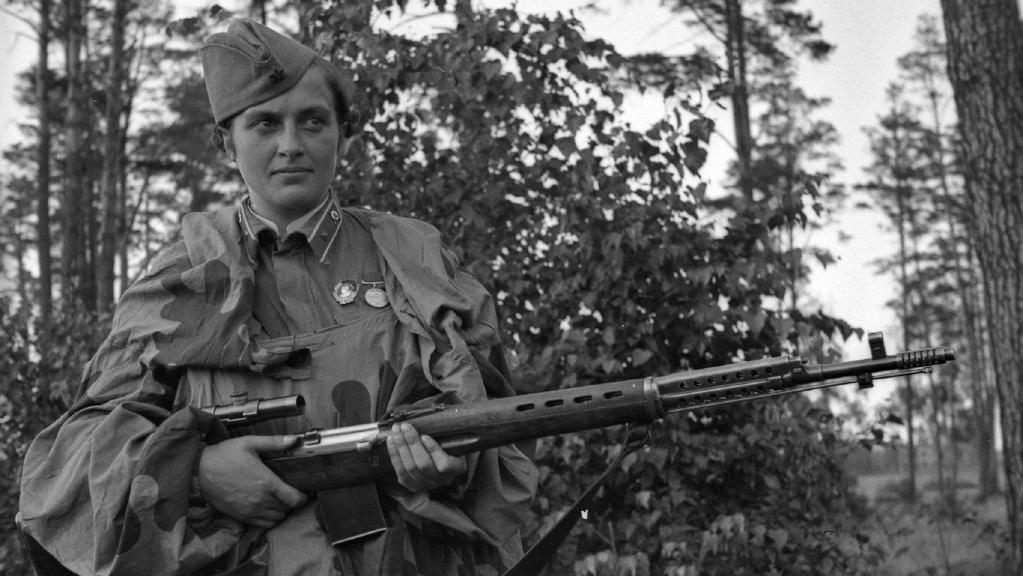 It’s hard for me to write about Pavlichenko, because there are a swirl of other names around her that I feel I should also be writing about. Maria Koskinauna, Roza Shanina,[2] Alexandra Ekimova, Klaudia Kalugina[3], many others – many lost, now. We don’t know much about them, really, so there isn’t enough to say except: “woman with rifle.” They are always young: humans like to feed 19-year-olds to the machinery of war – to me it’s tragedy compounded.

Pavlichenko’s a good example to point to, though, so just imagine her standing next to Eleanor Roosevelt with a battalion of ghostly women behind and beside her: the Soviet women snipers. Over 2000 Soviet women served as snipers during WWII and about 500 survived, including Pavlichenko. Her official score was 309 kills; as usual with military snipers that was probably a fraction of the actual number. 187 of her kills were in the first 3 months of her wartime service. She was 25. As her career shooting nazis progressed, she eventually became too valuable for propaganda reasons to serve in the lines, and was relegated to teaching and being a spokesperson. 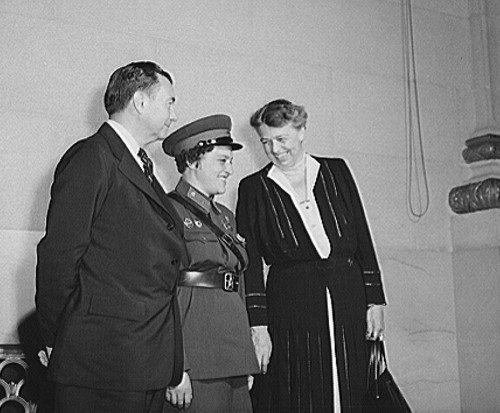 “One reporter even criticized the length of the skirt of my uniform, saying that in America women wear shorter skirts and besides my uniform made me look fat”

She didn’t take that kind of bullshit kindly:

In Chicago, she stood before large crowds, chiding the men to support the second front. “Gentlemen,” she said, “I am 25 years old and I have killed 309 fascist invaders by now. Don’t you think, gentlemen, that you have been hiding behind my back for too long?”

After the war, she finished her degree, became a historian and research assistant to the Soviet Navy HQ, and died in 1974. She was 58.

A 2015 film about Pavlichenko (“The Siege of Sebastopol”[review]) apparently adds a love-interest atop her busy life at the front. So, the “do you wear lipstick” question continues. I haven’t seen that movie, and I won’t.

In New York, she was greeted by Mayor Fiorello LaGuardia and a representative of the International Fur and Leather Workers Union, C.I.O., who presented her with, as one paper reported, a “full-length raccoon coat of beautifully blended skins, which would be resplendent in an opera setting.” The paper lamented that such a garment would likely “go to the wars on Russia’s bloody steppes when Lyudmila Pavlichenko returns to her homeland.”

I cringe at the stupidity.

I also want to draw your attention to The Night Witches, in case you haven’t heard of them. The “Stuff you Missed In History” podcast did an episode about them, they were incredibly brave and effective and many of them paid with their lives for military glory.

A thought about snipers: Chris Kyle, the American sniper with 300+ kills, was a member of an invasion/occupation force backed by an overpowering logistical arm. He came, he saw, he shot a lot of people. I’m not saying that what he did was easy, however, he was well equipped and supported. The Soviet snipers like Pavlichenko were using inferior gear and were up against an enemy that was as well-equipped and supported – or better equipped and supported. It’s one thing to shoot at ‘insurgents’ at a range from which you cannot even be seen (that way you get to choose the time/place/manner/opportunity of engagement) as Kyle often did – but it’s another entirely to shoot at the wehrmacht when they are invading your country and attacking your positions in force. The sniper/sniper duels of WWII such as Kreps vs Zaitsev at Stalingrad – were battles between peers at the top of their game; Kyle was mostly clubbing baby seals.