A recent article in The Guardian describes brutal put-down of protests in Kashmir; the Indian government is “using pellet guns” on civilians and has blinded several. (Trigger warning: guns, violence, political repression)

What bothers me (aside from seeing armed police shooting at civilians) is the way The Guardian completely adopts the Indian government’s language:

Most shocking of all has been the breaking up of demonstrations with “non-lethal” pellet ammunition, which has blinded hundreds of Kashmiri civilians.

Note to The Guardian: 900+ casualties is not “hundreds” it’s “nearly one thousand.”

Elsewhere: (as the caption under a photo)

An Indian policeman aims a pellet gun towards Kashmiri protesters in Srinagar in July.

This is the photo: 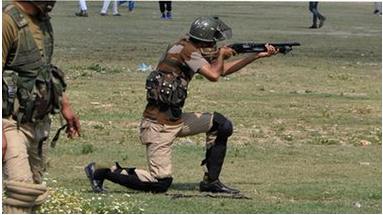 That is not a “pellet gun” that is a Mossberg ‘Persuader’ pump-action shotgun; I know: I own one just like it. Those may be under-powered “non-lethal” powder-loads but from the x-ray picture at the top it looks a whole lot like they’re firing bird shot to me.
Why is The Guardian not telling the truth about what is going on: The Indian government is firing shotguns loaded with live ammo at protesters. The Guardian appropriately wrings its hands about over 900 protesters suffering eye damage. What do you fucking expect you silly british journalists? They’re shooting birdshot at civilians using pump-action shotguns; Of course people’s eyes are getting damaged!
We must not accept the sanitization of such actions, through the use of minimizing terminology. If we do that, the next thing you’ll hear from the media is that the DAPL mercenary cops were “dispensing condiment” and “distributing rubber toys” at the protesters.

Do not trust governments when they say they are there to help. They may be, but you can’t tell who they’re there to help until they start, and by then it may be too late.
Do not trust media organizations (any of them) because all too often they consciously or unconsciously adopt an agenda; they play favorites and are very careful to hide that fact. But they still play favorites.

More on Pizza » « So It Begins