They say that Marcus Brutus, before he killed himself, pronounced these words: “O Virtue! I believed that you were a real thing, but you are nothing but a vain phantom!…” 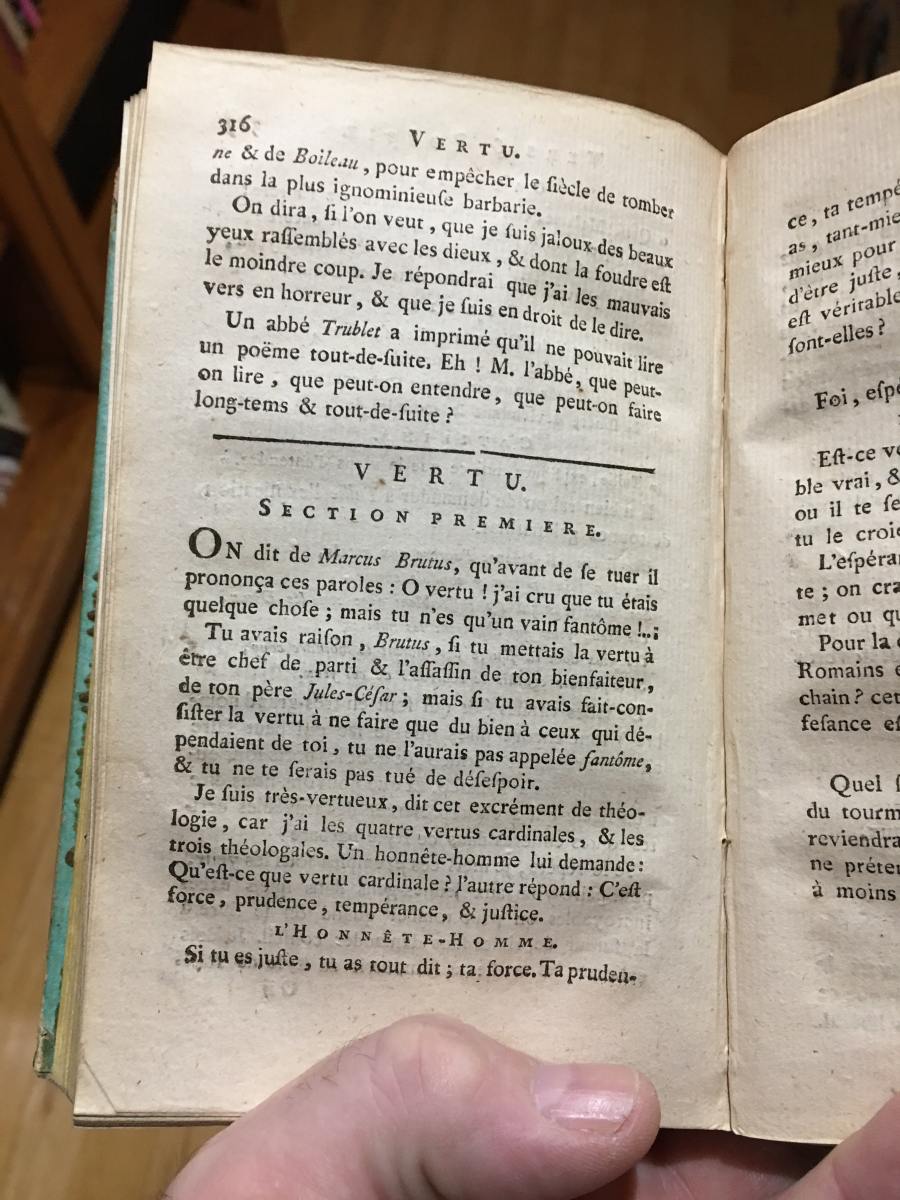 You were right, Brutus, if you assigned virtue to your being chief of the party and assassin of your benefactor, your father Julius Caesar; but if you had construed virtue as doing nothing but good for those that depended on you, you would not have called it “phantom” and you would not have killed yourself in your despair.

“I am very virtuous” says an excemental theologue, “since I have the four cardinal virtues and the three theological.”  “What is ‘cardinal virtue’?” an honest man asks him. The other replies, “Strength, Prudence, Temperance, and Justice.”

Voltaire seems to be taking a sideswipe at Plato’s virtues (courage, temperance, justice, and prudence) by pointing out the theological virtue of bullheaded arrogance is also prominent.

I feel like there’s something wrong with me, whenever I encounter virtue ethics: people seem to take it seriously, as an 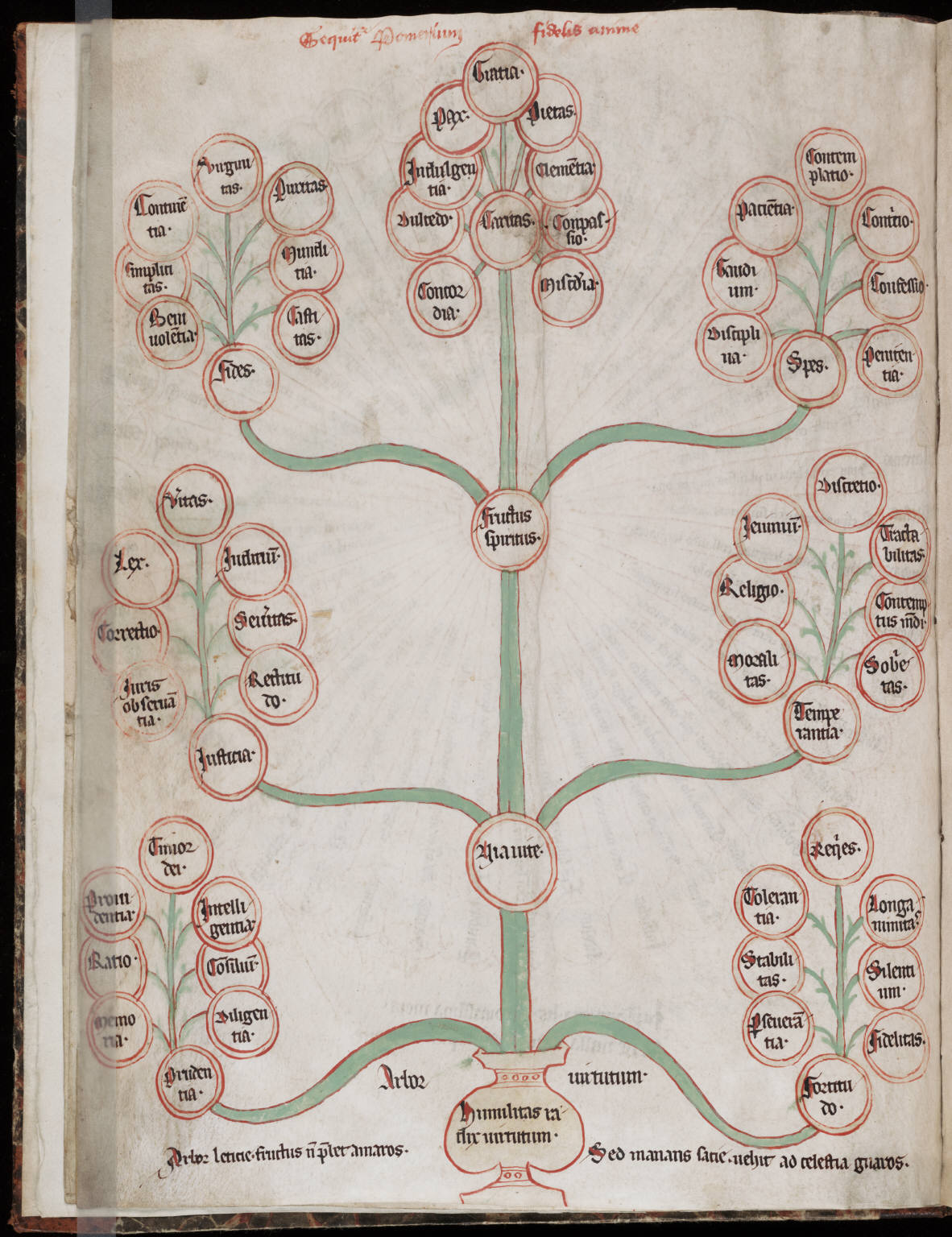 alternative to other systems, yet to me it never has appeared to be anything but reifying one’s own opinions about what is right or virtuous, and then adhering to them. Well, yeah, “begging the question” is not one of the philosophical virtues I uphold. When we call something a virtue, we are implying it is a good thing, therefore, we should do it. That’s presupposing that we understand what we’re talking about, when we talk about the virtue (strike one), that we share our understanding with others (strike two) and that the virtue is actually good or right in the sense of right/wrong. For the christofascist who bombs an abortion clinic, their actions are virtuous, for me they are never virtuous, and for you…? I have no idea. By saying “honesty is a virtue” the virtue ethicist tries to side-step the problem that crucified Kant: is it OK to tell a “white lie” if nazis come to your door and ask “are there any jews in the house?” If lying is always morally wrong (i.e.: honesty is a virtue) those of us who’d cheerfully lie to the nazi clearly do not share the same understanding of “honesty” as Kant – someone attempting to salvage the situation might try some backflips to argue that it’s not really a lie in that situation, but that’s just shovelling at the bottom of a hole.

In my own inner language, when I encounter discussion of virtues, I translate that to {opinions about right and wrong} and observe that the apparent truth of what people have to say about virtues doesn’t change at all, if one assumes that they are simply expressing their opinion. I’m personally in favor of that! Everyone should have opinions about what’s right and wrong and should feel free to express them. But I notice that, when we do that, we never completely agree what is always virtuous in all situations.

The Medieval tree of virtues is something I had not encountered before writing this (thank you google!) It’s an interesting way of organizing one’s opinions about what is right and wrong.

I have to hammer on that point a bit: in the tree of virtues article, it gives an example: “humility is the root of all virtues.” Now, we apply linguistic nihilism 101 (per argument clinic) and ask “what is ‘humility’?” Eventually I predict we discover that the person proposing ‘humility’ as a virtue defines it self-referentially and cannot, actually, tell us what ‘humility’ is in a way such that we could always determine what a ‘humble’ person would do in all situations. In other words, ‘humility’ is a laundry list of the speakers’ opinions about what they think they should do in any situation. In which case, why have the word ‘humility’ except as a compressed stand-in for the laundry list? And what do we do when we encounter something that goes off that list? (frantic hand-waving)

Note: I use the word “opinion” about morals a lot, because we can have opinions about morals, while I remain skeptical about morals otherwise. By treating discussions about morality and ethics as discussions about opinion, I implicitly understand that they appear to be personal and therefore not shared and above all not universal. If there is some kind of objective, shared moral truth out there, I would like to be exposed to it. I am familiar with Sam Harris and Philippa Foot’s arguments (and Richard Carrier’s) but they appear to be grounded on the truth that people have opinions about morals and I don’t see how those opinions become anything more than individual judgements that are more like aesthetics (I don’t like Brie Cheese) than morals (Brie Cheese is wrong).