On the subject of totalitarian impulses in today’s US, I am moved by the whole Gabby Douglas kerfuffle. As a mid-50s guy who would simply die if I contemplated gymnastics … 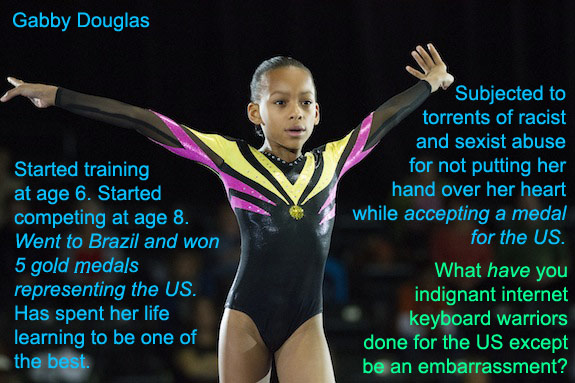 more of my mad photoshop skills

I mean, really. Here’s this woman who’s worked herself beyond normal human limits, who’s trained and bled and sweated and competed at a level that boggles the mind. And won. Don’t forget that part.

She works herself to the peak of her skills, gets on an airplane, flies to Brazil, gets paraded around and gawked at, then, when she gets her chance to do her thing she fucking nails it to the ground like it was welded there. And the whole time she’s wearing the admittedly ugly US team rah rah suits. Every action she does is attached with “USA” USA

And when she’s listening to the national anthem, that she’s heard however many zillion times she .. does whatever the fuck she wants to do, just like a person can and should do. And she’s subjected to abuse for not being patriotic enough?

I’m not a patriot. I think nationalism and totalitarian displays of unity are a bad idea; they are a barbaric remnant of human history. I would rather see the olympics be entirely about the athletes and not which country can spend money on silly outfits and sponsorship. I would rather see Gabby Douglas or Simone Biles compete as The Nation of Gabby or The Empire of Biles and they should be able to choose their own anthem to play when they stand at the podium.

As someone who’s utterly incapable of even understanding the level of effort it took to get to that podium, I just want to reach out across the internet and slap people silly for criticizing this person, from behind their safe keyboards, expending no more effort than a couple mouse-clicks. Slapping some of these people silly would still be vastly less work “for my country” than Gabby does in a day, but I guess I could be that patriotic.