Did you realize that raw sewage still goes into the Hudson River?  As recently as the 90s. And guess who was one of the premier proponents of pumping poo?  The Donald! From the Daily Beast:

Trump had two choices with a billion-dollar West Side project: build a sewage treatment plant or bow out. But there was a third option: flood the Hudson.

Slate has an article about the sewer opening off the Florida 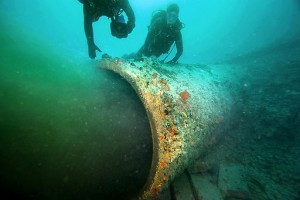 coastline. It sounds horrible, and I agree: don’t eat the grouper.

The ancient Romans had The Cloaca Maxima, which worked basically the same way: throw stuff in and it eventually winds up in the Tiber and goes downstream and you can forget about it. Bacterial bloom? What are bacteria?

Am I about to become Freethought Blogs special rapporteur of fecal content?