I often listen to the “Stuff you missed in history class” podcast as I am drifting off to sleep* but the episode I was listening to last night kept me bursting out into laughter.

“The Late Victorian Manure Crisis” is about one of my favorite things: logistics!!

I won’t spoiler their excellent description of the problem, but for one thing: 40 foot tall heap of 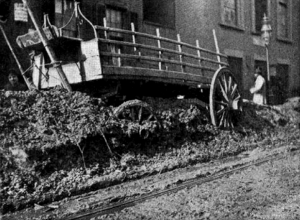 Where have all the tumbrils gone?

manure. That’s just a starter. Listen to it!

When I was at the Viking Museum in Oslo a few years ago, I remember there was some exhibit about how the vikings occasionally took a few  horses with them. Obviously, that’s how horses got to Iceland,** among other places. Viking ships weren’t big. I guess the poo went overboard, but, still. No wonder the vikings were so notably grumpy when they disembarked.

There’s an interesting logistical thing, which is where the need for a thing increases the need for more of the thing, and you get an out of control reaction. David Attenborough wrote about going into the highlands of New Guinea, and how you needed one guy to carry another guy’s supplies, so eventually you needed more guys to carry those guys supplies, etc, until you have some kind of Black/Scholes calculation resulting in weird numbers like that you needed 120 people to carry supplies for 5 englishmen for a week. That affects horse poop removal (if you are using horses to remove poop) as much as it affects panzers driving to Moscow.

BY the way, since the US’ tumbril industry has collapsed thanks to the efforts of Mr Henry Ford, when the revolution comes, we will probably have to parade the ci-devant on Segways, past hipster tricoteurs with 3D printers.

(* Sorry! NPR knocks me out even better.)

(** In Iceland, I once said, “ooh, what a lovely pony” whereupon a rather huge viking-looking guy yelled “THAT’S NOT A PONY IT’S A HORSE!”  So be careful not to mis-designate Icelandic equines. My percheron/suffolk: no, that’s a horse.)