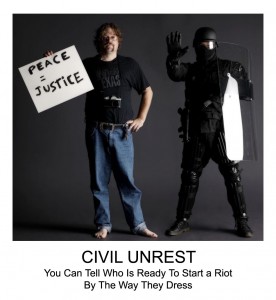 Over at Pharyngula, PZ points out something rather obvious, using a really beautiful photo to do it. I did this one back in 2014, inspired by some events. Of course, the only risk I ran was from the heat in the SWAT suit, and – of course – the everpresent scourge of carpal tunnel syndrome while working photoshop. I got the SWAT armor on ebay for a song – some law enforcement agency was upgrading theirs and sold off their old inventory cheap.

I remember a few years ago there was a small protest outside of the NSA’s headquarters at Ft Meade, MD. The NSA is actually pretty defensible, physically: high chain-link fences, cameras, wire-cut detectors, subtle “landscaping rocks” that would prevent a truck-bomb from ramming through, etc. They used to have a small detachment of regular military on site, as well – when I was there in 1992 there were guys in BDUs with M-16s, which was hardcore for 1992. On the day of the protest it was hot and because of the way the chain-link perimeter was laid out, the protestors were basically standing in the sun outside of a gate, protesting a parking lot. A Strategic Genius at NSA sent out several vats of ice-cold “bug juice” kool-ade, tables, chairs, awnings, and what M-16s were present were propped up against the fence while the security detail helped set up a sort of impromptu barbecue. Meanwhile, some of the retired cryptanalysts from the cryptologic museum came over and talked Feistel Networks and key exchanges with the cryptographers in the protest. They probably got some good hires out of that.

When you look at the police response to these near-riots, you are looking at a great deal of money being spent to look tough. A Strategic Genius would spend a little bit less on the military weapons and a bit more on tables, fans, chairs, a loudspeaker system, would have a bucket brigade running to the nearest Chipotle and Subway, tubs of ice-cold sugary crap to rot the protestors’ teeth, porta-johns, and would be listening and learning. For a fraction of what is being spent on the guns and Bearcats, they could police hearts and minds. And if that was all happening in the middle of the highway? Hey: that was the protesters’ smart idea. This is why I say we don’t need more cops, we need better cops.

PS – all prop guns are airsofts.