It’s terrible that police officers were murdered in Dallas — that was an unforgivable act of inexcusable violence. But now the police are lashing out, and it’s going to make everything worse. DeRay McKesson was arrested in Baton Rouge: he was “flagged” as a troublemaker for his role as a spokesperson and as someone who was photographing events, and tackled and thrown into jail.

Police, I beg you: stop. You are doing yourselves no favors by denying the legitimacy of the protests, and any sympathy for the genuine difficulty of doing your job is going to evaporate if you continue to confirm a reputation for brutality.

Also, the visuals are going to simply demolish the case for a valuable service that “protects and serves”. You cannot win against this. 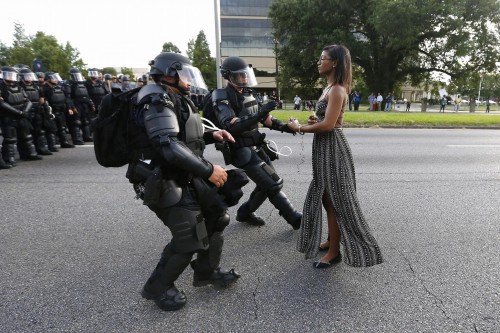 I have to ask, who arrived dressed for violence and rioting? Who stands both fearless and with dignity?

I played some games today » « Don’t blame the victims