This is my cornfield, which is about 100 yards from my bedroom window. It’s GMO – specifically, Roundup Ready. 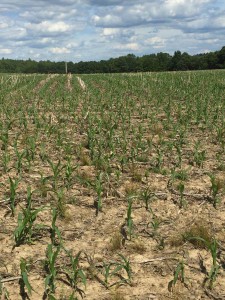 They drilled the seeds back in May, I guess. It was cut in September 2015. It’s now July.

The practice is called “no till” because … the farmer doesn’t have to till the soil between crops. The old way of farming would be to till the soil in the spring and fertilize it before planting, plant it, harvest it in the fall. When you’re doing no till, you spray the field (and maybe lime it in one pass) with roundup to kill off all the weeds that grew up ahead of planting, plant it, and harvest it in the fall.

It’s a whole lot easier to spray roundup and dump lime on a field than it is to plow it – it’s the difference between towing a spray boom, and making a pass with a tiller/breaker and then another pass with a disc to smooth the field back down. To run a tractor to perform any operation on a field this size, you’re going to burn 2-4 gallons of diesel, and about 4 hours of driving back and forth.

Farmers are happy to avoid all the driving back and forth. When I first bought my place, I used to make hay in this same field and that was also a lot of driving back and forth burning diesel. Some of my neighbors tow their sprayers behind an ATV or a pickup truck, which is much faster and more energy efficient than a tractor.

I also came to get the feeling that you are never 100% safe operating a tractor, even if you’re careful. I’ve had hydraulic lines blow, a power take-off driveshaft wrap itself into a pretzel and try to hammer its way in the back window of the tractor (leaving a heck of a dent in the front of the baler) and various belts and bearings fail. My old Belarus tractor had a centrifugal oil filter (a design of great beauty) which kind of exploded one day, leaving me in a cloud of oil filled with all kinds of nasty byproducts in the middle of a potential fuel/air explosion. I much prefer my Real Job, which runs me the risk of a heart attack because I sit in a chair doing things with computers and don’t get enough exercise anymore. But, once you’ve seen what a hay cutter does to a baby deer, you’ll see why internet security is a much better career field.

Any time spent tilling and discing a field is wasted time, if there’s a cheaper alternative that doesn’t require heavy equipment.

If you look at the ground in my picture you can see the cut stems and roots from 2015’s corn crop. When they harvest the field, they just come by with the cutter and suck everything up and leave the stems and roots. Every fall morning and evening I can look out and see the deer and turkeys (mostly) and the occasional bear wandering around looking for left over noms. The best part of the no till process, to me, is that the soil doesn’t get broken up, which means it doesn’t wash out in great big gulleys. down my creek, and into the river below my property. The fish in the river probably appreciate that, too. And – believe me – it’s no fun at all to be driving a tractor and hit a gulley – Ba-BOUNCE! Tractors don’t have a suspension like an SUV. It was one of those gulleys that ripped the u-joint on my power take-off driveshaft that time, so my experience was something like: Ba-BOUNCE, Tunk… Tunk… WHAM WHAM WHAM WHAM WHAT THE  BLAZES SHUT DOWN NOW OMG THERE GOES MY DAY, I am going to be driving around getting parts and wrenching on this thing because the hay’s got to come in… OMG look at the front of the baler. Breathe. Breathe.

I’m not going to settle the GMO debate* here, but what I see is a farming technique that takes a bit less than half as much work and fuel, half as much wear on the gear, no soil runoff or loss of topsoil and – in return – comes with higher seed cost and the cost of 20 gal of roundup/acre. 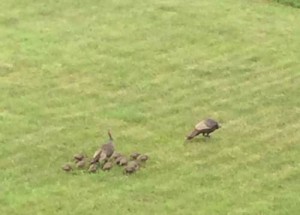 Consider the corn plant as (for us humans) a machine for producing corn. It could be GMO or non-GMO as long as the machine produces corn. It could be made of LEGOs as long as it produces corn, because I’m not eating the stem or the LEGOs – I’m eating the corn. I’ve encountered people concerned about GMOs that don’t appear to understand this at all. Of course if the plant was so modified that, instead of producing corn it started producing LEGOs, then I wouldn’t eat them. But if the seeds – the corn – contain LEGO DNA, I’m OK with that, as long as its yummy with butter or dried and ground up into cornbread. I don’t even care if the seeds – the corn – are capable of reproducing themselves, because they’re ground up and cooked, see, and they’re not capable of reproducing themselves after that anyway. I do think that Monsanto’s business practice of offering farmers a way to save time and effort, but then collecting half of the value of that in fees – well, that’s stinky. But anyone decent hates capitalists anyway.