I Write Letters – to the Marketing Director at Gate City Bank

… and to the management at Fort Abraham Lincoln, and to the ND Parks and Recreation Program Director. In case you want their address, the executive roles are listed here and the HQ address (according to the 2015 annual report) is:
Gate City Bank
PO Box 2847
Fargo, ND
58108-2847

Remember: companies are people too. 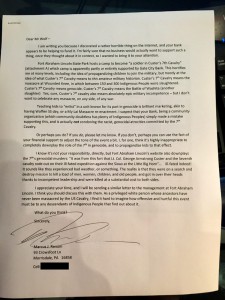 I am writing you because I discovered a rather horrible thing on the Internet, and your bank appears to be helping to fund it. I’m fairly sure that no business would actually want to support such a thing, once they thought about it in context, so I wanted to bring it to your attention.

Teaching kids to “enlist” in a unit known for its part in genocide is brilliant marketing, akin to having Waffen SS day, or a My Lai Massacre re-enactment. I suspect that your Bank, being a community organization (which community doubtless has plenty of Indigenous Peoples) simply made a mistake supporting this, and is actually not condoning the racist, genocidal atrocities committed by the 7th Cavalry.

Or perhaps you do? If you do, please let me know. If you don’t, perhaps you can use the fact of your financial support to adjust the tone of the event a bit. I, for one, think it’s highly inappropriate to completely downplay the role of the 7th in genocide, and to propagandize kids to that effect.

I know it’s not your responsibility, directly, but Fort Abraham Lincoln’s website also downplays the 7th’s genocidal murders: “It was from this fort that Lt. Col. George Armstrong Custer and the Seventh cavalry rode out on their ill-fated expedition against the Sioux at the Little Big Horn”…    Ill-fated indeed! It sounds like they experienced bad weather, or something. The reality is that they were on a search and destroy mission to kill a load of men, women, children, and old people, and got in over their heads thanks to incompetent leadership and were killed at a substantial cost to both sides.

I appreciate your time, and I will be sending a similar letter to the management at Fort Abraham Lincoln. I think you should discuss this with them. As a privileged white person whose ancestors have never been massacred by the US Cavalry, I find it hard to imagine how shocking and hurtful this “enlistment event” must be to any descendants of Indigenous People that find out about it.

What do you think?