One of the kids in the wargaming group went off on vacation in the midwest and came back with a new game: Dungeons and Dragons.

We’d mostly been playing Diplomacy and Third Reich and Dave and I used to bicycle down to Read St where Avalon Hill Games was headquartered, and play-test Squad Leader. But when the D&D game appeared, we split into the “All D&D all the time” set, and the others, who sometimes played something else. At that time I’d just gotten my first job, wiring panels for a burglar alarm company, and had some income, so I bought two sets of D&D books because I figured it was going to be part of my life for a while and I may as well stock up. The second set wound up in a ziploc bag in a dark place, and the first set was worn to pieces, dog-eared and penciled on. In terms of value for your entertainment dollar, those D&D books set a high bar and – best of all – if I ever need $4000-$6000 I can auction them off on Ebay. Being a hoarder and pack-rat is not always a bad thing. 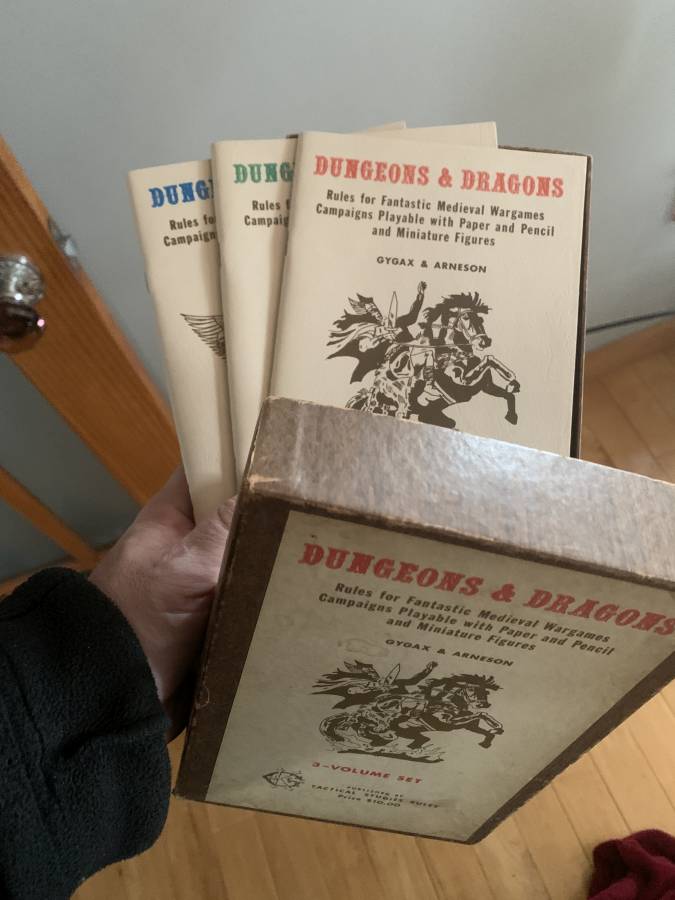 (included but not shown: Greyhawk and Blackmoor)

Lately I’ve been playing with midjourney and chatGPT and I have some D&D-related AI output to talk about.

I’m not going to dance around the bush: I am seriously impressed by our soon-to-be AI overlords. They are capable, creative, and (if you believe in IQ tests) geniuses. So I did some experimenting with chatGPT. The first experiment I did, I told it a napoleonic battle scenario of a river crossing. “You have 2 regiments of line infantry, 2 squads of cavalry, and a small artillery battery. You’ll be attacked by, approximately, four times your infantry and double your cavalry” [see what I did there?] The AI not only gave a correct answer for a reasonable set-up for a river defense, it said that since the enemy didn’t have artillery, it would forward-deploy the battery. Um, A+ answer. Then, I decided to play D&D with the AI, except having the AI control the party, while I played dungeon-master.

Me: let’s play a D&D style adventure game. you are the leader of a party of 4 adventurers: a paladin, a healer, a mage, and a rogue. your characters have a typical load-out of gear
for those classes.

AI: Sure, let’s begin! Your party is on a quest to retrieve a powerful artifact from a
dangerous dungeon. As the leader, it is up to you to guide your party through
the challenges that lie ahead. The paladin is a formidable warrior, skilled in both
melee combat and holy magic. The healer is adept at restoring the party’s health
and removing negative status effects. The mage is a powerful spellcaster capable
of dealing massive damage to enemies and providing support to the party. The
rogue is a skilled thief and assassin, able to infiltrate and sabotage the enemy’s
defenses. Together, you are a well-rounded group capable of facing any
challenge that comes your way. What would you like to do first?

OK… Got that wrong. But maybe I need to emphasize. 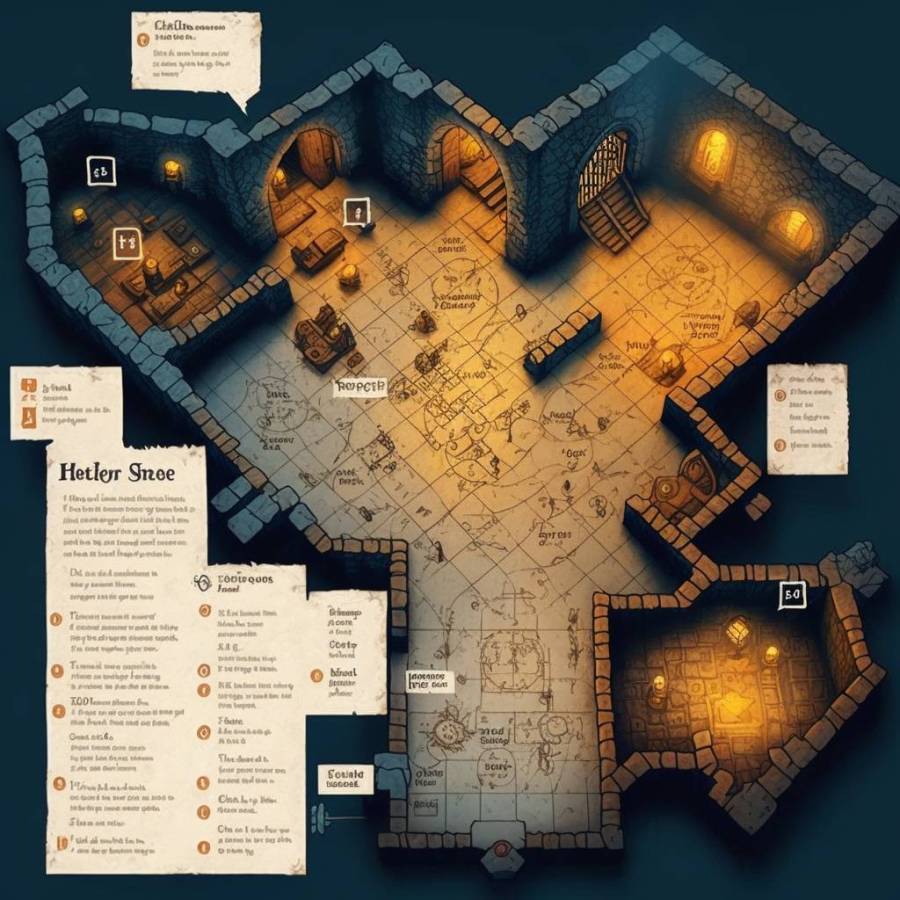 Me: no, you are leading the party, I am the dungeon master.
your party is assembled outside the dungeon. there is a massive door set in a rock
archway. the door appears to be locked. What do you do?

AI: As the leader of the party, I would first assess the situation and gather
information about the door before taking any action. I would ask the rogue to
check for any traps or hidden mechanisms on the door, and have the mage cast
any divination spells to try and learn more about the door or the dungeon
beyond. If the rogue finds any traps, we would disable them before attempting
to open the door. If the mage’s spells reveal any information that could be useful,
we would make use of it.
Once we have done all we can to prepare, I would have the paladin use their
strength to try and force the door open if possible. If that doesn’t work, I would
have the rogue try to pick the lock. If all else fails, I would have the mage cast a spell to unlock the door or make a hole in the door.
Overall, my goal is to have the party work together to safely and efficiently open the door and proceed into the dungeon.

Me: the rogue finds a small button hidden in the stone wall and pushes it. the door unlocks

AI: Great! With the door unlocked, I would proceed with caution and have the party ready for any potential threats that may lie beyond. I would have the paladin take the lead, with the rogue following closely behind to check for any additional traps. The healer would be in the middle of the group to provide support and the mage would follow to provide magical support if needed.

As we proceed, I would have the rogue continue to check for traps and have the mage use any divination spells at their disposal to detect any hidden dangers or potential paths forward. The paladin would be ready to engage any enemies that we may encounter, while the healer would be ready to provide support and healing.

We would proceed through the dungeon, taking care to avoid any traps and fighting any monsters that we may encounter, using our skills and abilities in coordination to overcome any obstacles and eventually retrieve the artifact. 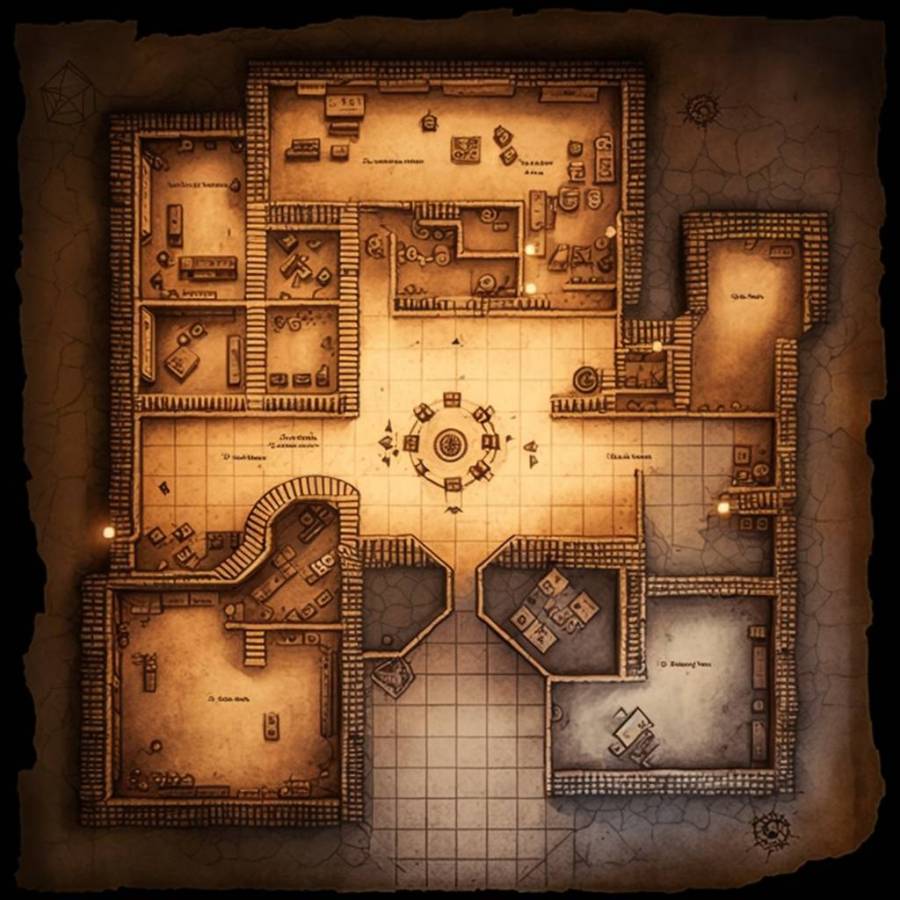 I am starting to feel like Pete Buttigieg is running the party – the overall description coming from the AI sounds like an industry analyst. It’s not quite “proactively leveraging our synergies” but it’s not typical D&D dialogue. So, I asked for different:

Me: can you speak less formally?

AI: Sure, no problem! Let’s continue the adventure. So the mage just let off a big old fireball and everyone scurries away from the explosion. The orcs are getting fried left and right. The party and I quickly assess the damage and see that the spell did some serious damage to the orc ranks. We take advantage of this opportunity and push forward with the attack. I tell the paladin to charge in and hack away, the rogue to take out any remaining orc leaders or spellcasters, and the mage to keep supporting us with spells. The healer makes sure everyone stays alive and healthy. We don’t want to waste this opportunity and want to end this fight as fast as we can.
Me: The orcs are defeated! your rogue notices the leader of the orcs was carrying something that looks like a large dried bony hand.

AI: Awesome! The party and I were able to defeat the orcs and come out victorious! After the fight, the rogue notices that the leader of the orcs was carrying something that looks like a large dried bony hand. I would approach the rogue and ask if they know anything about the object. I would also have the mage cast any divination spells that they have to check if the object has any magical properties or if it’s related to the artifact we are searching for.

We would take a moment to catch our breath, and heal any injuries we may have sustained in the battle. After that, we would continue our journey deeper into the dungeon, using the information and resources we have gathered to guide us to the artifact. 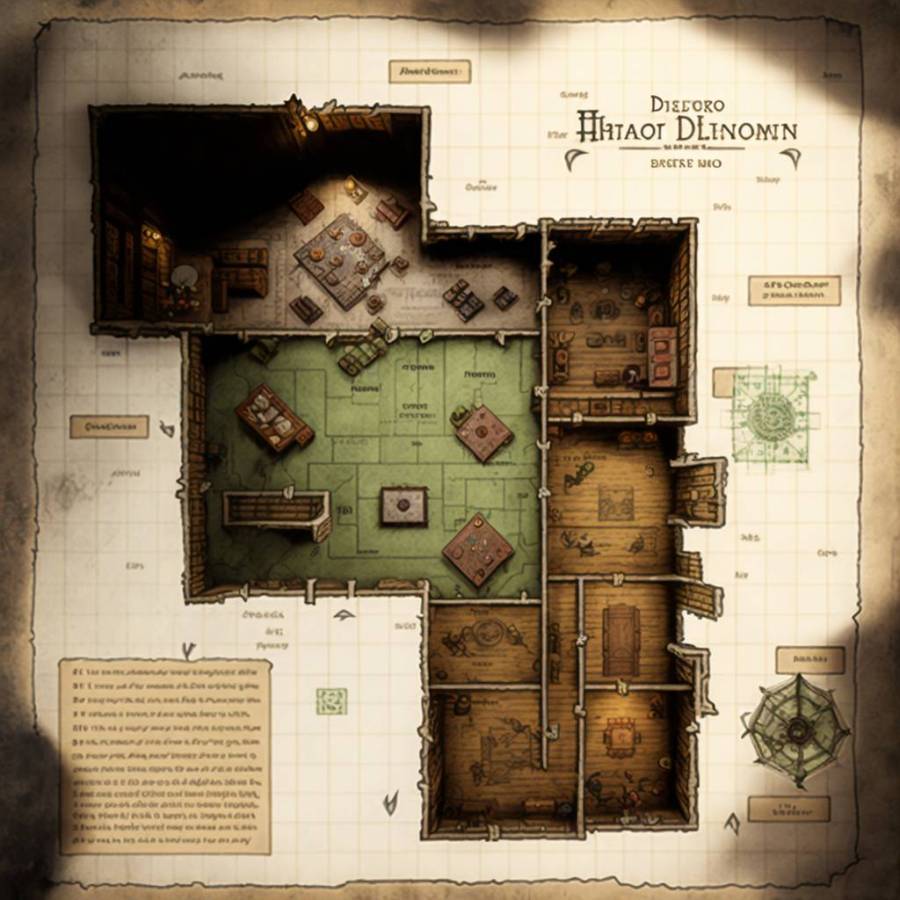 Me: as the party creeps down the hallway, the rogue raises a hand and whispers, “oh my god, it’s a troll!” do you think we can take it? the paladin shrugs. going through the hallway or turn back are your choices.
please be less formal

AI: Shit, the rogue just spotted a troll down the hallway! I quickly assess the situation and weigh our options. The paladin is unsure if we can take it on, so it’s up to me to decide whether we press on or turn back.

I’ll be honest, trolls are no joke. They’re big, tough and regenerative. But we have a well-rounded party and we’ve come this far, so I would likely suggest that we at least try to take it down. We’ll have the paladin hold the front line, the rogue will flank and take out any weak points, and the mage will support us with spells. The healer will keep us all alive.

If the fight seems too tough and we are taking heavy damage, I would call for a tactical retreat. We could come back with more information, better prepared, or even with reinforcements.

That’s probably enough of that. I don’t think that the AI is a very good party-leader because it’s too concerned with covering its butt. And naturally, I omitted all the details of the fights. Come to think of it, I should have asked the AI to “roll 2 D 20” just to see what it did.

My feeling right now is similar to how I felt when the first chess-playing computers started beating human masters, then grandmasters. It would not be long before the clear champion chess player was a machine.

At another point I asked the AI to … oh what the heck pixels are cheap:

Me: outline a quest-line for world of warcraft. describe the quest-giver, the situation, the quest objectives and background, and the rewards a party would get on completion

Quest-line: The Battle for Lordaeron

Situation: The Horde, led by Sylvanas Windrunner, has invaded Lordaeron and taken control of the city. Lady Jaina Proudmoore, leader of the Alliance forces, tasks the player with reclaiming Lordaeron and driving the Horde out.

Background: Lordaeron, once the capital of the human kingdom, has been a key location in the ongoing war between the Horde and the Alliance. The Horde’s capture of the city is a significant blow to the Alliance and threatens to give them a strategic advantage.

I welcome the addition of generative AI to gaming, because the people who write game quests are not notable for writing interesting quest-lines any more than the AI is. The potential here is huge – just have the AI keep spinning stories that the player is trapped inside of. Ultimately this would reveal gaming to be little more than being stuck on a hamster-wheel, which is what it has always been anyway.