Some people take the whole “alpha male” concept way too seriously, and too far.

It’s an unfortunate use of language, and I always wondered about the scientist who came up with the term. A bit of googling later, and my knowledge-vacuum still applies. An article in The Guardian [guard] says it was Frans De Waal’s book Chimpanzee Politics [wc] but that does not sound right to me – the publication date listed on worldcat is 2007 and I know I’d been hearing about alpha males long before that. The Guardian asks “do alpha males even exist?” to which the answer is simple: sure, in chimp groups they do, because that is how a certain set of dominance behaviors in chimp groups are sometimes named. Someone call an appelomancer, stat!

But the obvious response would be, “that does not apply to humans because human tribal structures are quite different from chimp tribal structures” (leaving out bonobos, I assume) – in fact the point of studying chimp packs’ behavior is because they are different from humans and behave differently. Next, we can argue about whether it’s nature or nurture, and whether an alpha chimp can be a fascist or not. Or, perhaps, whether a fascist can be an alpha chimp. Who knows? Whatever scientist came up with the term did no favors, because they could have just called the leader of a chimp pack “the pack leader” and perhaps humans would have been denied another piece of pseudo-science to develop in detail. But, immediately, humans started talking about “alpha male behavior” regarding humans in human packs – never mind that there are reasonable questions as to whether or not alpha male behavior applies to humans at all. 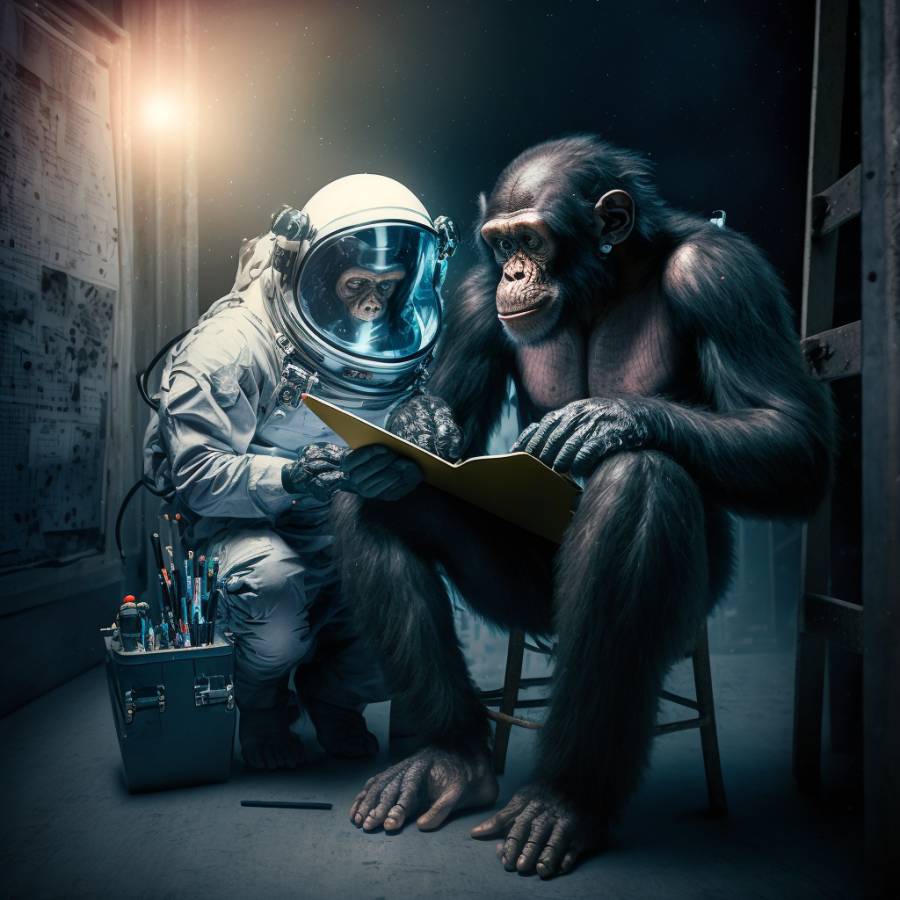 Midjourney AI and mjr: “the alpha chimp of a pack of chimpanzees is interacting with a scientist.”

I wonder if The Guardian‘s article was written by an AI because it seems kind of waffly and uncertain:

It really became accepted as something men should want to be with the success of Neil Strauss’s The Game, based on lessons he acquired from the Pick Up Artist community. This should trigger alarm bells for many; terms and methods acquired from Pick Up Artists should be treated with extreme scepticism at the very least. But, sex being the powerful motivator that it is, the idea that being an alpha male would improve your life and make you more successful with women proved incredibly beguiling, so acceptance and use of the term has now become the norm. But this doesn’t mean it’s valid, just that it’s common.

So, the pseudoscience community adopted the term quickly, and started making a mess of it more or less immediately. Are there “alpha males”? It’s just a word for a collection of behaviors – the collection of behaviors is what’s interesting. From there we can quickly jump into the weeds by asking how a behavior is designated, is “dominance” something we can measure on a scale or not? How do we measure it, etc? I consider this to be a standard problem with psychology, namely that it appears to be highly concerned with coming up for new words for vague concepts, which are then reified as behaviors or syndromes or whatever. But, pick up artists have an interesting problem, which is that they are also trying to describe collections of behaviors and those are also vague or contested concepts. I guess what I’m implying is that pick up artists and psychologists have the same interest and the same problem, they’re just using their organizational frameworks to classify different people in different ways, for their own ends. I don’t have much interest in pick up artists but a few years ago, I thought I might do a blog posting about some aspect of pick up artist philosophy (remember, at the time I was also interested in hypnosis) and I did a bit of searching around until my brain came squealing to a crash stop after I encountered videos about “sigma males.”

There is a lot of shit about sigma males. There are other types that the pick up artists have come up with, too. The different types of males they have designated are presumably more or less fuckable based on the collections of behaviors that they exhibit. I’m not going to bore you with this shit, I’ll just mention that it exists and it’s highly concentrated stupid. For example, a youtube video about sigma males goes on about them [youtube video] and how sigmas are attractive because blah, blah, blah. Here’s a typical description of a sigma:

Often misunderstood and underestimated, Sigma Males are the lone wolves of the modern world, quietly lurking in the shadows. As the alpha male dominates with brute strength and the beta male conforms to society’s expectations, the sigma male follows his own path, choosing to live outside of the dominant hierarchy of society. But make no mistake, this enigmatic figure is more dangerous than any alpha. With his razor-sharp intelligence and ruthless determination, he is dangerous in a way that few others can match. This isn’t an attempt to glorify the sigma male, but he is so private that few know the true power of this mysterious figure.

Wait, what? Is the whole point of life to figure out where you sit in some imagined dominance hierarchy? Well, that answers one question, for me, namely: “why are there so many ‘incels’?” it’s because they are sitting around watching dumb videos about collections of behaviors, rather than asking what they might or might not want to do in terms of their own behaviors, if it’s so important for them to score with a cheerleader. The funny thing, of course, is that the incels have concluded that “chads get all the cheerleaders” not understanding that “chad” is also a designation for a collection of behaviors that they believe increases the likelihood of the “chad” scoring with a cheerleader. If that’s the case, it seems that they should be studying the “chad” behavior collection and doing what “chads” do rather than doing what “incels” do. 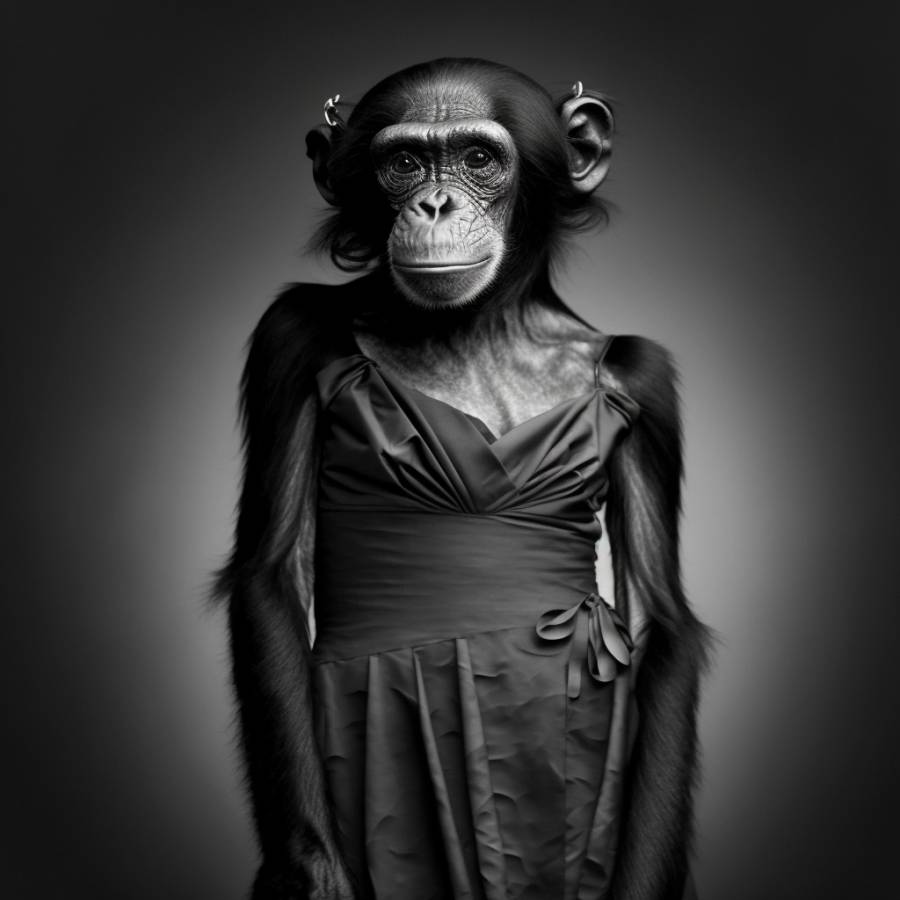 Midjourney AI and mjr: “the female chimp is posing in a fashionable gown like a runway model.”

These videos about “sigma” males are unsettling for me: they consist largely of footage extracted from movies that supposedly illustrate how “sigma” males behave. What the makers of the videos don’t seem to understand is that they have their epistemology backwards; someone is not born a “sigma” they are born in some way and develop a collection of behaviors, and then someone comes along and designates them as an alpha, or whatever. As Bob Dylan said in Theme Time Radio Hour about an old school musician, “I suppose nowadays you might call him ‘bipolar’ but back then we just said he was mean.” You are not born “a fashion model”, you are born a certain way, grow up and practice certain behaviors that form a collection that some people might say are things a “fashion model” might do.

The other aspect of the videos I’ve seen (I have not looked at many) about “sigma” males and the other designations of males, is they are focused to some degree on various strains of violent authoritarianism. Review the description of “sigma”s above:

But make no mistake, this enigmatic figure is more dangerous than any alpha. With his razor-sharp intelligence and ruthless determination, he is dangerous in a way that few others can match.

/me puts on his psychologist hat “OH! A psychopath!”

Of course, “psychopath” is a collection of behaviors and existing states (nature and nurture) and it’s impossible to pick those apart, either. What bugs me about this particular pseudo-science is that it appears to be implying that being a “sigma” is attractive, or something. The implication is “dangerous is good.”

These people should get some counsel from a pack of bonobos. Anyhow, in addition to the 12 different types of people from the zodiac, and the 16 different types of people from the Myers-Briggs “type indicator” and so forth, we have multiple collections of behaviors that represent an example that I suppose we are supposed to emulate. I’m not going to give advice, here, but it occurs to me that my experience of women is that they like guys who are fun, interesting, industrious, organized, capable, and gentle. Sure, a soupçon of ruthless determination can be attractive if a man is re-wiring a house or changing the oil in a car. Empress Josephine was less than impressed by the ruthless determination in Napoleon’s grand strategic opus, his attack on Russia. Was Napoleon a “chad”? Or an “alpha”?

These collections of behaviors are considered desirable: ruthlessness, hidden violence, etc. But based on my life, I’m not so sure that ruthlessness and hidden violence is what gets the babes. I have noticed that lots of money brings a certain kind of partner. I have noticed that lots of alcohol brings another. Being Bonaparte attracts a certain kind of woman, too, but it seems to me that putting some thought into what one wants in a partner is probably a better strategy than just deciding “I want a cheerleader” and working backwards from there. Oh, look at me, there I go thinking like a “sigma” again.

A Question about Space Telescopes » « A Tumbril Remark