A trope about samurai swords is that they are incredibly strong and sharp.

In fact, they are typically sharp, depending on the blade geometry. What makes a blade cut is the weight or pressure behind it, the thinness of the edge, and the degree to which the material supporting the edge is arranged so that it doesn’t bind going through whatever it’s cutting. “Thin to win” is an old knife-maker’s saying and it’s why kitchen knives are thin: they don’t need to smash through armor in order to get to the carrot meat inside. The reason a samurai sword is sharp is because the Japanese generally pay intense attention to detail regarding their swords – and that applies to sharpening them. Interestingly, a Japanese blade polisher doesn’t exactly “sharpen” a sword; they simply return the grind to its original shape, and burnish the edge. If the original shape and edge was sharp, the results will be sharp, too. It’s a bit hard to visualize how that works, but basically everything about a Japanese blade is intended to lead toward it being sharp and, as long as it is properly maintained, it will be. Take a look at the planes that form the edge and continue the planes until they come into contact and you’ll find its a sharp angle. Of course if there’s a chip or ding, you’ll wind up with a dull spot. 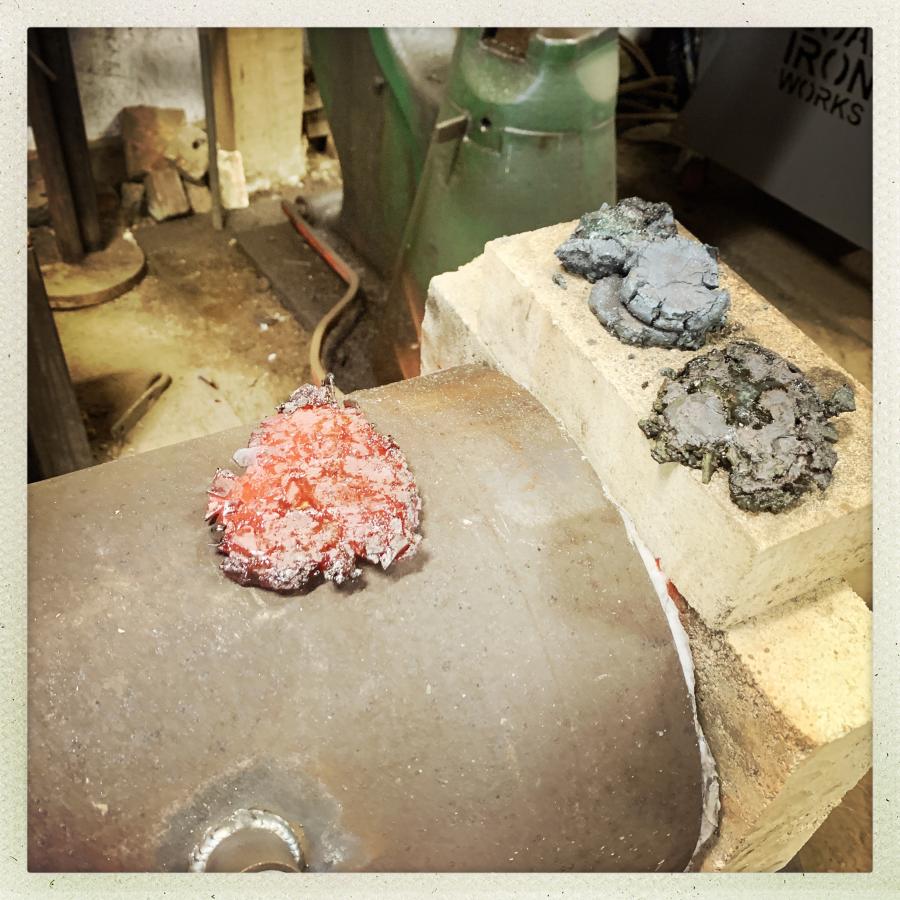 The next step in the process is to take the foamy bits of steel (formerly iron) and squish them flat in the press. Once that’s done, they are stacked together, fluxed, and welded into a sort of puck-like billet attached (with a simple weld from a stick-welder) to a handle – a chunk of rebar. In the traditional Japanese process, this is done with a sort of paddle-like thing, which is made from pieces of steel that were processed earlier. Instead of using borax flux, the traditional process wraps the paddle and cookie-chunks with cloth soaked in clay (keeps air away) and glassy clay that helps serve as flux.

Welding is all about temperature, pressure, and keeping air out of the contact-point. In this case, we had a huge advantage in the form of the Coal Iron forging press that Dragonfly Forge recently acquired. I’ve been using a forging press (16 ton) since I started blade-smithing and was immediately converted. In this stage of the process, a smith using a hammer would be making little tiny careful taps on the material, trying to merge it gently – but with a press you just heat it and squash it and it’s welded. This is a huge safety plus, as well: hitting red hot steel with a hammer near someone else’s hand can be problematic. 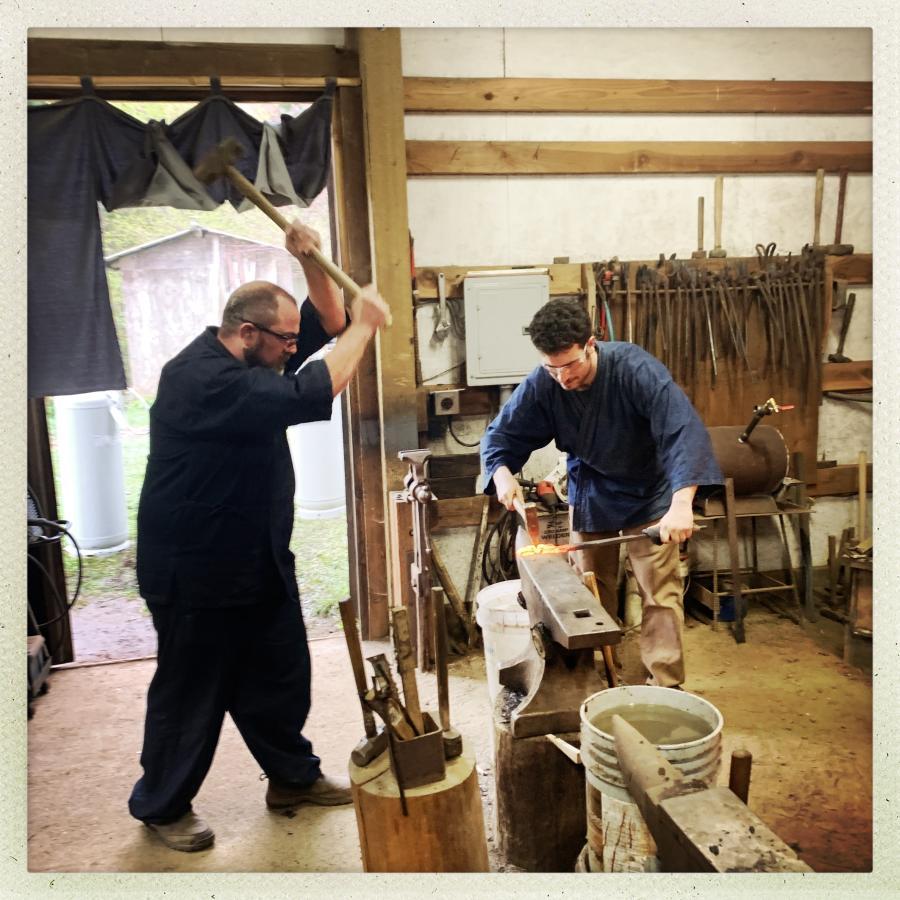 Gabriel is holding a hot cut tool, while Chris whacks it with a sledgehammer. It takes about 10 good whacks to cut across a billet of yellow-hot steel. Once it’s mostly cut, Gabriel will flip it over onto the edge of the anvil, and Chris will put the head of the sledgehammer on it to weight it, while Gabriel taps it a few times to start the metal folding where the cut-line was made. That’s the old school way of doing it.

When I hot fold a billet, I have a little cutter-thing that I made by putting a block of hardox (shock-resistant stainless) in the bandsaw at an angle, so it would cut a wedge-shape – then I drilled the block, tapped it, and added a handle. When I want to hot cut something, I put the metal in the press and squish the wedge through it, then let the press grip it while I start the fold at the cut-line. It’s a lot easier for one person and I think overall it’s safer than having someone swinging a sledgehammer anywhere within 6 feet of my head or hand. Traditionalists, like the Dragonfly Forge guys, are a bit hard to turn around, sometimes, on these things. On the other hand, they’re my teachers and they know a whole lot about this stuff. Nothing justifies itself like success. But, then again, the ancient Japanese smiths would have cheerfully used hydraulics if they had them. 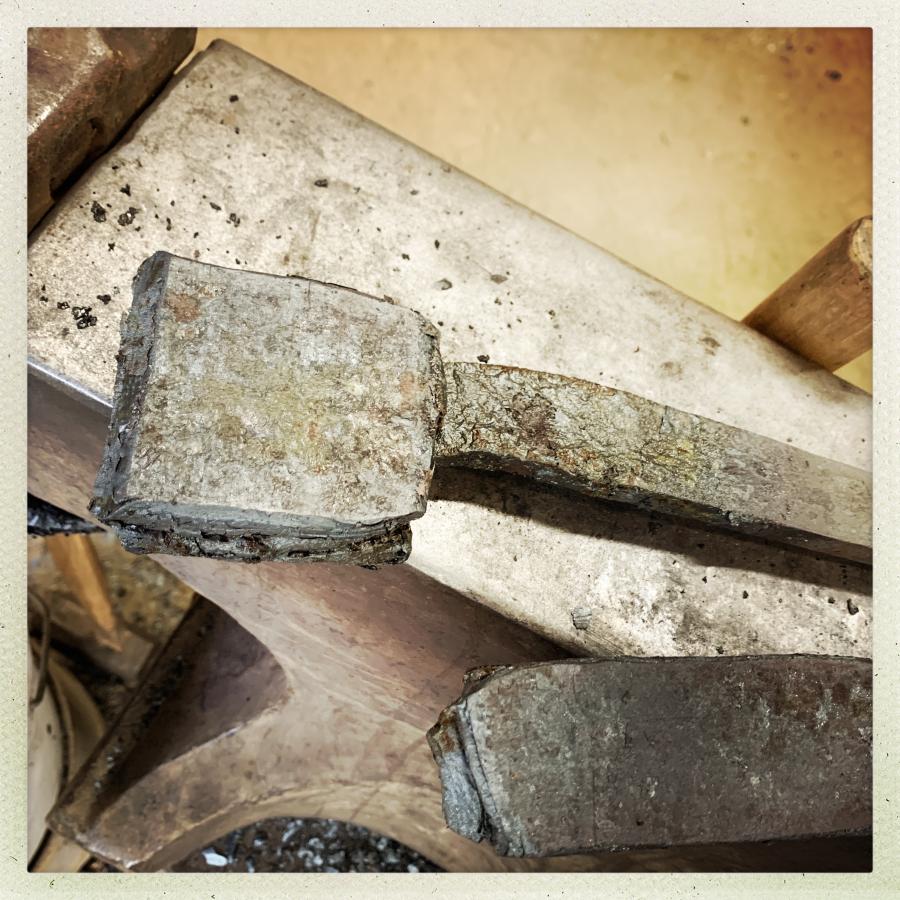 This is where the folds in Japanese swords come in. It’s not doing any sort of magic, what it’s doing is evenly distributing the carbon through the metal, via migration. It also drives out any “cold shuts” – spots where the welds did not take. Interestingly, you can hear them when the billet is being pounded. They sound like kind of dead spots that don’t “ping” like the rest of the steel. Another fun part of folding is when you get a pocket that has inclusions of charcoal, it makes like a little 4th of july firework and spits out a pretty vigorous stream of sparks. Figuring out the number of folds to do is a question of how tight you want the metal’s grain to be. The grain will be a result of the “waves” of carbon driven through the metal. We did 10 folds, so the grain is very tight (that’s 2^10 layers!) The layering doesn’t do anything magical to make the metal stronger, it’s just a refinement trick, but the more refined the steel is, the stronger it is.

Once the billet was formed, it was chopped into 4 pieces and welded to handles. then we pulled out a bunch of books of pictures of Japanese blades, and looked at geometries of tantos throughout history. A typical tanto blade has the distinctive clipped tip of Japanese blades (curved, not straight) and is short, slightly curved, light, and strong. Naturally, there are a variety of forms. I immediately fell in love with what is called an “osoraku”. 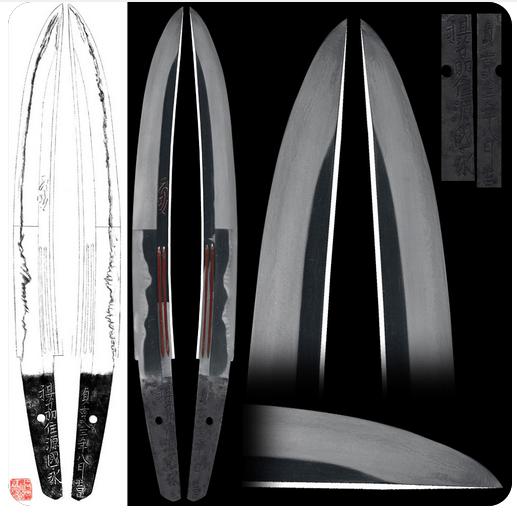 The original O So Raku blade was made by Sukemune in the Muromachi period. It’s got a – well, ridiculously long tip (kissaki) – and a thick heavy deep curve. I don’t know why I liked it but I immediately said, “that!” Then everyone patiently explained to me that it’s the hardest grind for a tanto, and that professional polishers charge double for osoraku blades because of the crazy tip-line, etc. Seriously, though, how can anyone not like that blade? It’s so sexy I bet it’s a pleasure to be stabbed with one. 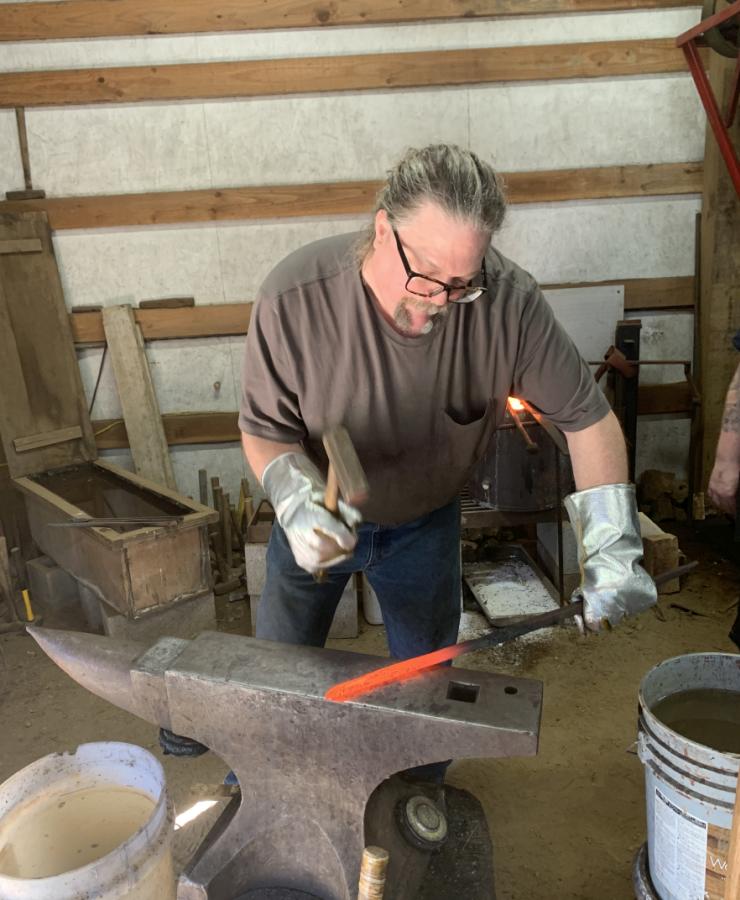 So, that’s the starting-point for forging: a red hot stick-like piece of steel. To shape the tip, the end is cut off at a 45-degree angle, then hammered down and around so that the grain of the metal will follow the line of the tip upward (especially important for an osoraku) then the rest is a matter of beating the middle until it expands, and hammering an approximate shape. From there it’s endless refinement.

In the picture above I am using a 2 1/2lb traditional Japanese ‘dog’s head’ shape hammer. I don’t particularly care about hammers, since I do most of my work with the press, but I didn’t like the dog’s head much since it wants to turn in your hand. I suspect the Japanese make their students use them because a hammer that wants to turn in your hand gives you immediate feedback as you start your swing, if your swing is not perfectly straight.

Osoraku apparently means “perhaps” if you parse the inscription literally.