Dust collection is a standard shop problem. When I was a kid, my father’s friend Monsieur Foulquier (who did most of the carpentry at the house in France) had a very old-school shop, where the floor consisted of a 2 foot-thick layer of sawdust; I know because I was curious and did a dig. His carpentry shop dated back to the Napoleonic era, I am fairly sure, and even had a central power distribution consisting of a bar with huge wooden pulley-wheels and everything could hook up/down through the use of long leather belts.

[I’ve just sent in a photo request to my mom; it’s possible that my parents have pictures of the shop somewhere in their archives of photos; they’d be worth sharing. It was a shop built in the time when you started with one tool – a saw – and made all the rest.]

I don’t have dust control problems like that but I do have a modern vacuum system with some filters and a primary dust separator. The primary separator is a garbage can with a liner bag, and a top that implements a vortex that drops most of the heavy sawdust into the bag. The rest goes to the vacuum machine which has large felt filter-bags. I’ve only had to empty them about once a year. Most of my large dust goes straight to the floor and there is a small army of push-brooms leaning against the wall, which I use while I’m thinking about what I plan to do next.

The new bandsaw complicates things a bit because it also needs vacuum hoses and a splitter; I’ve got some arranging to do. And all of that made me decide it was time to deal with the collection system a bit better. This is based on an idea I saw someone else do, but it’s my own interpretation based on PVC plumbing pipe. It turns out that the outer diameter of a coupler for 3″ pipe is just about right for the inner diameter of a 4″ collector hose. That gave me everything I needed for the design. 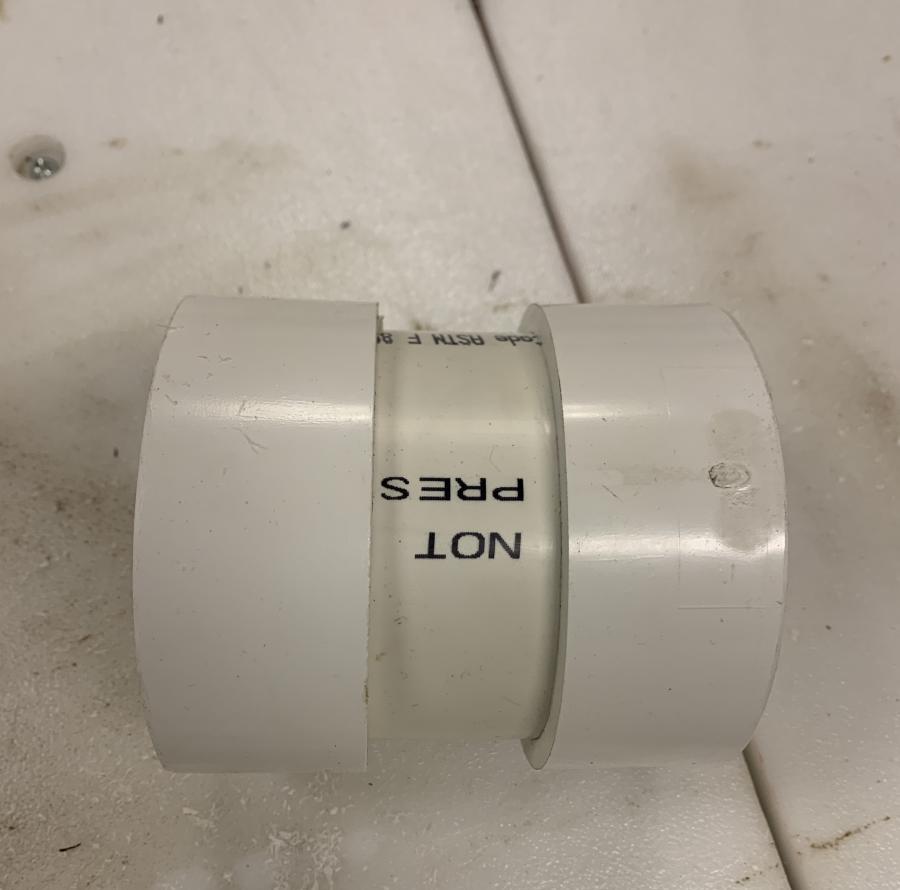 There exist things called “couplers” which are different from “patch couplers.” A coupler is concentric inside, so that as the PVC pipe is pushed into it, it gets tighter. Patch couplers are straight all the way through so they can be slipped over a break. I bought 5 patch couplers and when I got back to the shop it turned out that some jerk at the store had put a coupler in with the patch couplers so I had 4 patch couplers and one coupler. The first job was to saw them in half and cut short pieces of PVC pipe to sit between them (you’ll see how all this works in a bit).

This is goofy but I had trouble cooking up a safe way to cut the couplers in half. If they had been anything but patch couplers, I’d have slid them onto the end of a piece of pipe and used the pipe as a handle, then done the job on the table-saw. But since the patch couplers won’t grab, they’d spin. So I decided that there is no limit to “appropriate overkill” and cut them on the metal lathe using a parting tool. In fact, while I was at it, I used a boring bar to remove the interior concentricity from the coupler. Because, why not? It turns out that cutting PVC on a metal lathe is almost entertainingly easy. And, it’s good practice. 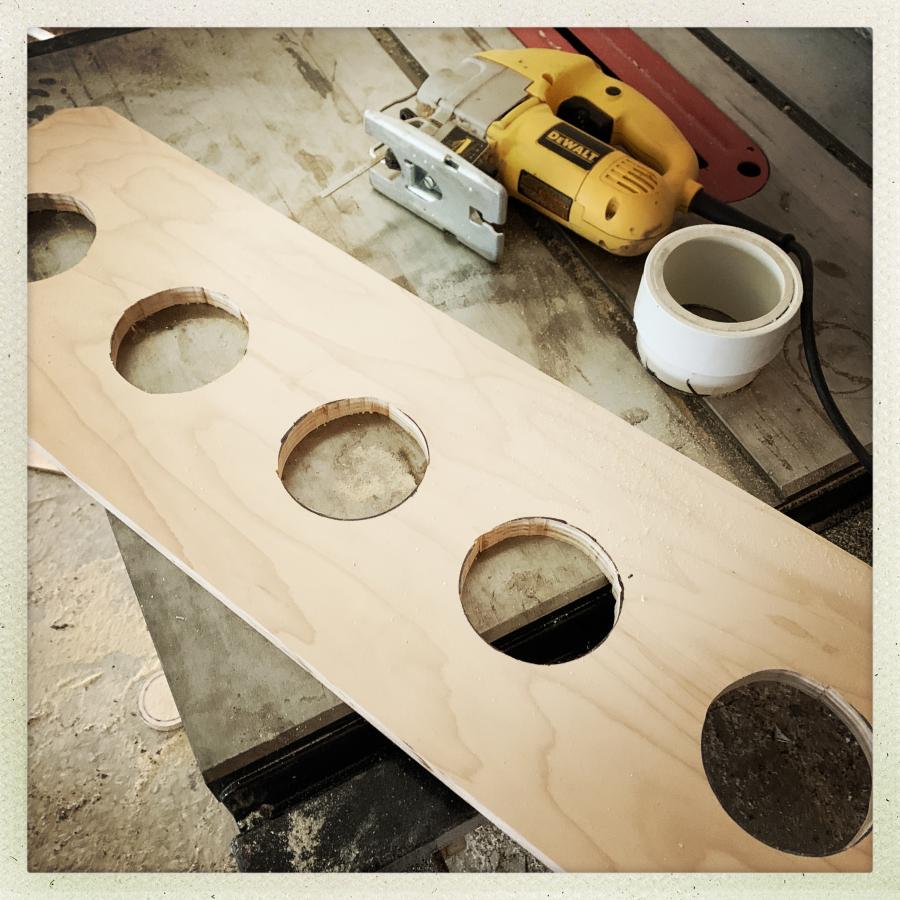 No, that’s not a latrine for lawn gnomes. The next step was to cut a series of holes for the couplers. You can see one of the glued-up couplers in the upper frame. Each coupler is going to fit through the wood, then have the mating piece glued down onto it, to hold it in place. I fudged the length of the inner tube so that there’s some overhang at the top that another tube can fit into, but the bottom is flush. 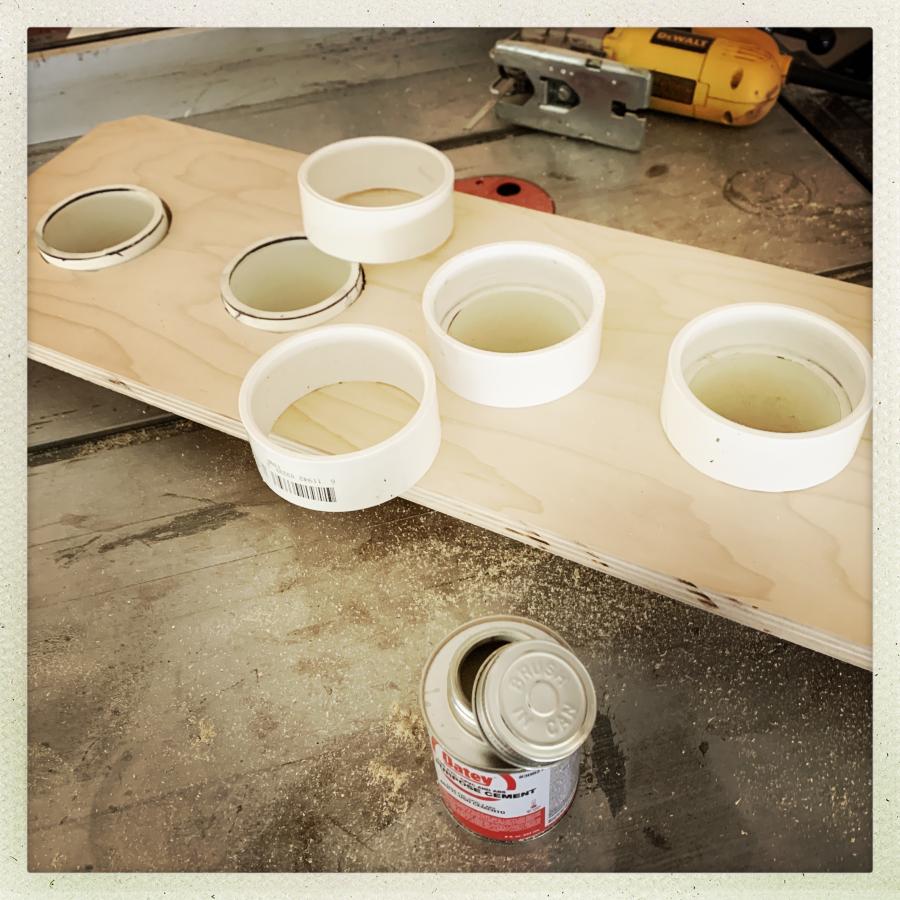 It’s not a huge lip, but it won’t be taking much load so it should be fine. For each coupler, I added glue then tapped the half-coupler down with a hammer so it fit tightly through the board. While I let all that glue dry (it’s PVC glue: about a minute) I cut a piece of angle bracket steel, rounded and smoothed it, and drilled some holes for screws and a mounting bolt then shot a non-fine art coat of primer on it. 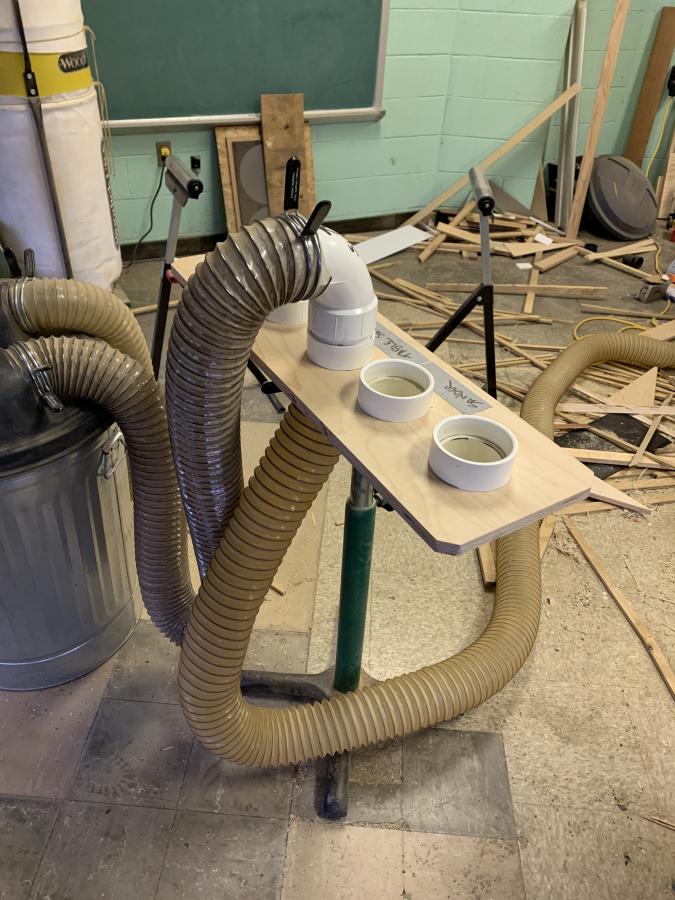 The stand is an actual dust collector support stand that I had sitting around, not supporting any actual dust collector. Otherwise I’d have used my standard stand-making technique, which is to sit a piece of steel T-stake into a bucket and fill the bucket with cement. The “head unit” for the selector is a 90-degree piece with a stub of pipe glued into it, that mates with the recesses in the connectors. I roughed and narrowed the hose-end of the elbow piece with my belt sander because it was a bit tight getting the hose on.

So, that’s it with one hose (the table saw) hooked up. Next I need to do the hoses for the bandsaw and connect the hose for the sander (wood) and maybe get ambitious and run a hose over to the lathe. I’m not sure if I want to do actual dust collection for the lathe because it produces massive long shreds of stuff that are easier to sweep up than vacuum. I’d have to change the bags constantly. 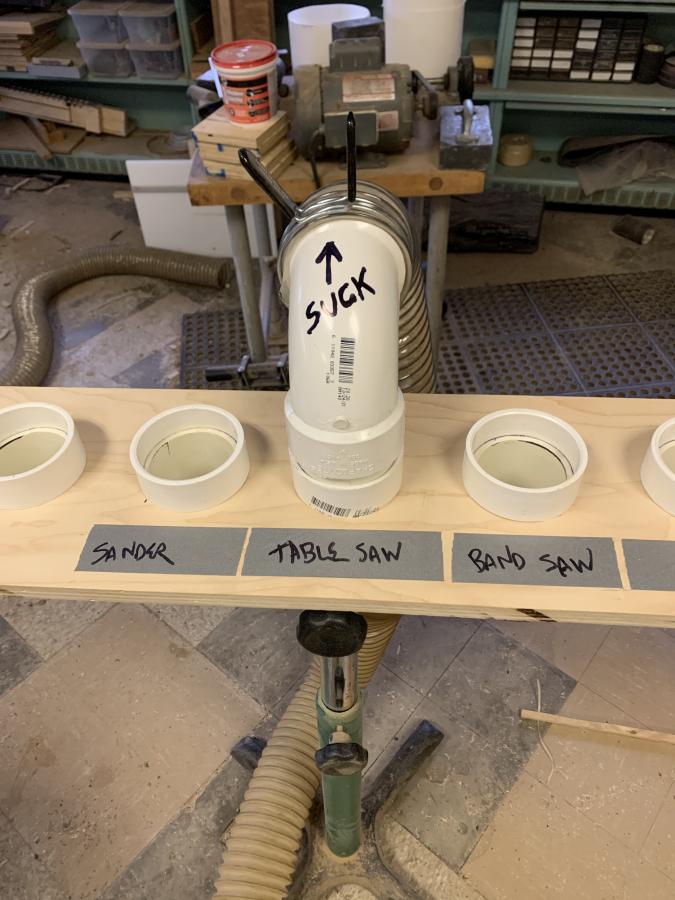 This should go a good way toward reducing sawdust jams in my machines. One time I got lazy and table-sawed some polypropylene (just one cut, honest!) which filled the saw with ribbony threads of poly, jammed it, and I had to disassemble half of the pedestal to get it clear again. When I fool myself once, I’m a fool.