The whole “Columbus discovered The Americas” meme is stupid; rather obviously the people who settled down there 13,000 years before Columbus came, did. After all, they were there to greet him when he arrived, and promptly murdered a few of them. There were literally millions of people who discovered and inhabited the americas before Columbus was even born. What a strange conceit that it takes a white european to “discover” a place.

But, of course, the vikings reached the americas before Columbus did, too, and they were white and european. So, Columbus is now diminished to the point where we won’t mention that whole embarrassing incident any more in this posting. 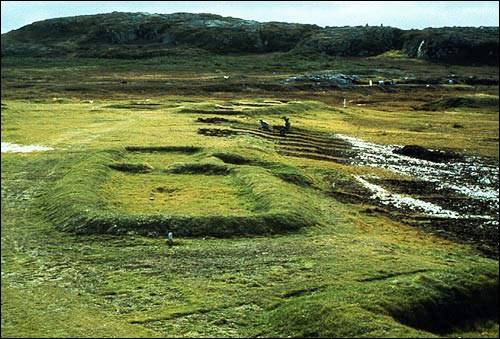 Until recently it was a question “when?” the viking camp at L’Anse aux Meadows in Newfoundland was established. That question has now been answered, by some clever sciencing.

This study, published in the journal Nature, made use of the cosmic-ray induced upsurge in atmospheric radiocarbon concentrations during a known solar storm in AD993, which released an enormous pulse of radiation that was absorbed by trees at the time.

The logs, with bark still attached, were from trees alive during that solar storm, and excavated from the site. Such solar storms are reflected in annual tree growth rings. In all three samples, 28 growth rings were formed after the one that bore evidence of the storm, meaning the trees were cut in AD1021.

There is some other supplemental evidence, such as that the trees were cut with metal axes, which were not available to the natives of Newfoundland at the time. But it’s irrelevant: the layout of the buildings, the forge, etc., were all viking tech of a certain period and the camp could be dated reasonably accurately by the tech and references to “Vinland” in the sagas.

Using the variation in tree rings because of solar storms to date a log precisely – that’s clever! Yay for science.

Like Hitting Yourself in the Face With a Hammer » « VFX Breakdowns