Gosh, the people in Washington sure do like to lie. And the supine media (who want to think of themselves as “watchdogs”) (more like “watch chinchillas”) report what they are given in “talking points” memos.

In case you’ve been dead and buried for the last couple of months, the current big kerfuffle in Washington is a bunch of play-acting about how we haven’t got enough money for this or that useful social program. And, as always, there’s another social program that goes unmentioned: the defense budget. It’s a social program, right? It’s just oriented toward destroying societies.

Here’s how you can tell that the whole thing is being discussed dishonestly. In case you need help with that: the framing is consistent. For some reason everyone has decided to adopt the habit of referring to Krysten Sinema and Joe Manchin as “centrists”. In an honest media landscape, there would be a variety of labels chosen to describe them, i.e.: “crypto rightists”, “lying sacks of shit”, “coal baron” or “big pharma sell-out” etc. Instead, everyone is referring to them as “centrists”, which is an affront to anyone who prefers people to be honest about their politics. Sinema and Manchin are “moneyists” or “oligarchs”, perhaps – that’s their allegiance. But isn’t it suspicious how everyone in the media has mostly adopted the oligarchs’ own framing regarding themselves?

Another one: the framing of Biden’s big infrastructure bill is that it’s “$3 trillion” (or whatever) but the part about “… over ten years” remains sotto voce. Why does anyone accept that, instead of talking about a “$300 billion/year infrastructure bill”? It doesn’t take a whole lot of multiplication to annualize this stuff, which is a reasonable metric. Someone, who wrote some talking points memos, decided to make the infrastructure bill look like a great big financial hard-to-swallow gobstopper. It is a lot of money, no doubt, buy the prevailing framing is to compare $3 trillion with $300 billion. What a load of bullshit. Also, in ten years, Joe Biden will not be president anymore and he’ll be lucky if he’s still alive at all. Why does the Washington inside the beltway crowd like to pretend that a piece of legislation is going to survive Biden’s presidency, when Biden probably won’t survive it, himself?

Of course what’s happening is that someone decided to frame up the infrastructure bill as “too expensive” and bulked it up to ten years as though it’s a lump sum rather than an annualized sum. The word for that is “lying with statistics.”

Why not frame some other things that way? The DoD budget, for the next ten years, is $8 trillion. And, since the intelligence community is, for all intents and purposes, part of the DoD, let’s add that in and call the DoD budget a cool “$10 trillion” That framing smells pretty bad, doesn’t it? Manchin and Sinema are caviling at a measly $300 billion per year but write checks with a flourish to the tune of $10 trillion. The media is in on it, society’s watchdogs are propagating the dishonest framing. They’re in on the game, they’re not watchdogs at all.

None of this is anything new, I hardly need to say. The media and the inside the beltway set have a long-term conspiracy in which certain frames are just not to be challenged. For one: defense. Anyone with half a brain knows that it’s the “Department of War” or “Department of Offense” – the US has not had to defend itself since it went to war with itself in 1861. Another of the great big whopping lies the US tells itself is about its nuclear weapons: they’re a deterrent.

America’s nuclear arsenal is increasingly oriented toward being able to carry out a mostly successful first-strike anywhere in the world without any warning. This included a “nuclear weapons upgrade” that, um… [pop]

The nonpartisan Congressional Budget Office’s (CBO) estimate of nuclear weapon expenditures over the next decade has jumped a staggering $140 billion in just 2 years. 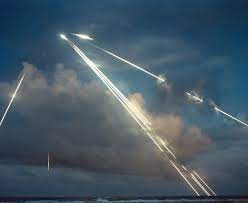 A US test of MIRV warheads in a ballistic missile. In typical applications, this would be the last thing your eyes were able to see

Of course the war-hawk pseudo- deficit-hawks aren’t raising a squawk about that. But it’s worth looking at a bit of history that is relevant. For one thing, the nuclear weapon research/upgrade research the US was doing was almost certainly in violation of weapons control treaties which, to be fair, the Russians were almost certainly violating, too – figuring out “who started it” in that particular chicken/egg question is going to be pointless. But let’s go back a few years and a few things that began in 2002, under George W Bush. [aca]

Six months ago, I announced that the United States was withdrawing from the 1972 Anti-Ballistic Missile (ABM) Treaty, and today that withdrawal formally takes effect. With the treaty now behind us, our task is to develop and deploy effective defenses against limited missile attacks. As the events of September 11 made clear, we no longer live in the Cold War world for which the ABM Treaty was designed. We now face new threats from terrorists who seek to destroy our civilization by any means available to rogue states armed with weapons of mass destruction and long-range missiles. Defending the American people against these threats is my highest priority as commander-in-chief.
[Beginning of “Statement of The President on the ABM Treaty”]

The ABM Treaty of 1972 committed the US and USSR to not develop anti-ballistic missile technology (which the US had been developing openly since the Reagan administration) hey, we’re the US, we don’t mean those treaties we sign! But if you’re in the habit of following this stuff you’ll probably realize that the US, even then, knew North Korea was going to be developing ballistic missiles, and the US’ nuclear hegemony was threatened. The collapse of the USSR was not anticipated. 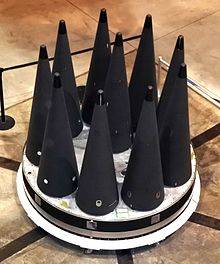 Back in the Reagan days technologists pointed out that intercepting ballistic missiles is really hard and the defense establishment responded with some rigged demos that made it appear to be not completely absurd. [Since that time, computer miniaturization and processor improvements have made it possible for Aegis missile systems to hit less sophisticated ballistic missile systems that don’t have independent re-entry vehicles (MIRV). So, naturally, the rest of the world has responded in proper “arms race” manner, to nullify the US’ massive investment. Just like how the boffins said they would. The North Koreans developed submarine-launched missile systems and the Russians worked on “hypersonic” missiles. [“Hypersonic missiles” is a loosely-defined marketing term for missiles that go 5+ times the speed of sound [wik] which is most missiles, really] Basically, the Russian hypersonic missiles are an attempt to moot the anti-ballistic missile capabilities that the US has managed to attain at great expense.

That’s how arms-races work: Side A spends an absurd amount of money to develop a threatening new technology and Side B ‘has to’ spend money in order to moot the threat. Then Side A does it again, etc. In the usual scenario, guess who is Side A? If you guessed “the US, which spends more on its military than almost the rest of the world, combined” you win a shiny new internet! Of course the US justifies its next move in the arms-race by pointing to everyone else’s counter-move:

China conducted not one, but two tests of new hypersonic weapons in July and August, the Financial Times (FT) newspaper has reported, raising more concerns in the United States about the growing military capabilities of its geopolitical rival.

The London-based Financial Times reported on Thursday that Beijing launched a rocket that employed a “fractional orbital bombardment” system to propel a nuclear-capable “hypersonic glide vehicle” around the Earth for the first time on July 27, according to four people familiar with US intelligence assessments.

If this was a surprise to the Biden administration, it would be an example of a significant intelligence failure, since knowing about this sort of thing is exactly what they’re supposed to be doing, and detecting ballistic missile launches is a very important thing that the US’ massive weapons apparatus is supposed to do. I suspect that there was some back-channel “Hey, Joe? Our guys wanted you to let your guys know that if they see a launch trace that it’s just a test. Nobody freak out and push any buttons, OK?”

So, on top of all the other absurd budget-framing that’s going on, the military-industrial-congressional complex is going to be in full hue and cry over the new missile gap. 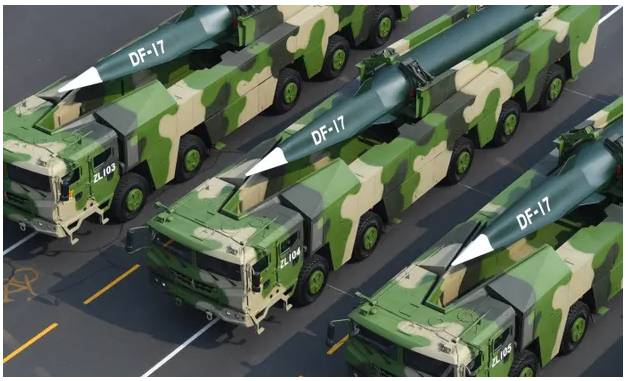 I like the photo of the MIRVs coming in so much I updated my Short Story About Nuclear War with it. [stderr] And I mean it, it’s short. Check it out if you didn’t read it before.

It appears as though the Chinese added some control software and terminal guidance to their existing systems, and the resulting thing looks and acts pretty different from the old thing. But MIRVs with decoys and MIRVs that do terminal maneuvering is really nothing new. Except it’s going to be a really important excuse to spend some billions of dollars.

“As the events of September 11 made clear, we no longer live in the Cold War world for which the ABM Treaty was designed” – we all know Bush didn’t write that great, huge, whopper of a lie because it’s a complete sentence. How did a bunch of guys flying airplanes (an extremely low-tech attack) into buildings justify withdrawing from a treaty governing extremely high tech attacks? And, as usual, the country didn’t dissolve into gales of laughter and egg-throwing.

Need I mention that MIRVd warheads are more of a first-strike weapon than a retaliatory weapon? The US, naturally, led the world in the development of MIRVs, specifically in case it wanted to be able to launch a massive time-on-target first strike. If what you want is deterrent, you want ballistic missile subs with MIRVs and extremely long-range missiles. The arms control world has consistently remained un-fooled by this stuff, thank goodness. That’s why there was a treaty put in place banning mid-range MIRVs, which the US responded to by boosting its portfolio of nuclear-capable cruise missiles. You can’t make this shit up. Wait, what am I saying?! Everything the US says about its nuclear arms is made up.