Resistance to an occupying power is a human right, the nationalists say. I’ve always felt that arrangement was set up because even nationalists eventually figure out that eventually you’re not the top dog, anymore. It’s a sort of a back door built into the system for authoritarians to justify their eventual resistance to any power that overcomes them.

That’s an important point because, on paper at least, the US was an occupying power in Afghanistan, and publicly carried out a number of retaliation attacks. If the Germans had done them in WWII, we’d call them “reprisals” and someone would have been hanged for them at Nuremberg. But when the US does it, it’s “self-defense”, i.e.: “we are defending ourselves against your attempt to defend yourself against us.” Of course, reprisals go horribly off the rails when they are aimed at the wrong person.

To briefly recap the situation for those of you who have been hiding under your beds to avoid the news cycle: The US finally left Afghanistan after 20 years of pointless violence in pursuit of no viable strategic objective. At the airport in Kabul there were crowds of people. Some intelligence asset informed the CIA, who informed the DoD that ISIS-K was planning a splashy mass casualty attack at the airport. Because the US had already established a security arrangement with the Taliban, to get its people out to the airport via a secret entrance, US leaders appear to have decided the threat didn’t matter and the next day a suicide bomber killed himself, 200 other people, and wounded many more. Among the dead were 13 US troops from the famous “Red Shirt” division. President Biden went in front of the cameras and vowed revenge:

We will hunt you down and make you pay.

We will respond with force and precision at our time, at the place of our choosing,

Duly, a few days later, a drone strike killed a carload of people in Kabul. The reporting was that there were “secondary explosions” indicating they had “gotten the right guy” because normal people don’t drive around with explosives in their car. After a round of back-patting, the Americans sat back and waited for the news cycle to switch to the fact that Britney Spears is getting married, again.

But, as they will, details of the retaliation strike leaked out, demonstrating one of the big problems with remote-controlled assassination: targeting is not certain. In some cases, the drone assassins could use cell phone data to identify their targets, but the targets quickly learned not to use a cell phone if they thought they might be getting American attention. So, the targeting is based on behavior. Someone doing something suspicious, like loading boxes into the back of a truck – that could be a truck bomb being assembled. Speaking as someone who often loads boxes into the back of a gnarly-looking black SUV with big tires, brush guards, and a light bar, I find it unsettling to realize that I probably look death-worthily suspicious because terrorists won’t go to the trouble to make a panel truck that looks like a FEDEX delivery truck. Anyhow, the story is beginning to unravel and it’s looking more and more like the US blew up some guy, any guy, to show those Afghanis how tough Joe Biden is. Establishment mouthpiece, the New York Times has the story: [nyt]

U.S. officials said a Reaper drone followed a car for hours and then fired based on evidence it was carrying explosives. But in-depth video analysis and interviews at the site cast doubt on that account.

the military called it a “righteous strike”

They probably should have called it a “typical strike” – in that it was off-target but lethal.

Military officials said they did not know the identity of the car’s driver when the drone fired, but deemed him suspicious because of how they interpreted his activities that day, saying that he possibly visited an ISIS safe house and, at one point, loaded what they thought could be explosives into the car.

Times reporting has identified the driver as Zemari Ahmadi, a longtime worker for a U.S. aid group. The evidence suggests that his travels that day actually involved transporting colleagues to and from work. And an analysis of video feeds showed that what the military may have seen was Mr. Ahmadi and a colleague loading canisters of water into his trunk to bring home to his family.

While the U.S. military said the drone strike might have killed three civilians, Times reporting shows that it killed 10, including seven children, in a dense residential block.

This is exactly what people have complained and worried about, regarding drone assassinations: “deemed him suspicious because of how they interpreted his activities that day” is a well-chosen phrase. The intelligence analysts watched a guy drive a truck someplace, then someplace else, then … they blew him away. I had been wondering if the CIA had burned some intelligence asset by striking a person whose inner circle they had compromised, but it was nothing that accurate. The guy looked suspicious, so they popped a thermobaric missile into the courtyard where he was parked, along with a bunch of other civilians.

Saying “we thought it was a military target” does not excuse the war crime of area bombing civilians. Not that the US recognizes the International Criminal Court (for some reason) but the US plays that line all the time. [The Russians and Israelis don’t bother] But the US can’t bring itself to apologize – they just double down. You know, “the guy had a beard!” or “his camera looked like a gun!” The lame-ass excuses of cops, everywhere. In that sense, yes, the US is playing “global police force” – except, unfortunately, they’re like LAPD.

According to his relatives, that morning Mr. Ahmadi left for work around 9 a.m. in a white 1996 Corolla that belonged to N.E.I., departing from his house, where he lived with his three brothers and their families, a few kilometers west of the airport.

U.S. officials told The Times that it was around this time that their target, a white sedan, first came under surveillance, after it was spotted leaving a compound identified as an alleged ISIS safe house about five kilometers northwest of the airport.

It is unclear if officials were referring to one of the three stops that Mr. Ahmadi made to pick up two passengers and the laptop on his way to work: The latter location, the home of N.E.I.’s country director, was close to where a rocket attack claimed by ISIS would be launched against the airport the following morning, from an improvised launcher concealed inside the trunk of a Toyota Corolla, a model similar to Mr. Ahmadi’s vehicle.

Driving a white car is not a good enough reason to kill someone.

Throughout the day, an MQ-9 Reaper drone continued to track Mr. Ahmadi’s vehicle as it drove around Kabul, and U.S. officials claimed they intercepted communications between the sedan and the alleged ISIS safe house, instructing it to make several stops.

“Alleged ISIS safe house.” What are the criteria behind that allegation? Let me guess: it’s classified. But this illustrates another problem – your contacts, even peripheral, can get you killed in the drone assassination world. If you’re someone like a Medcins Sans Frontieres doctor, who is always driving all over the place, using a cell phone, you probably fit the profile, too. Don’t drive a white car on the wrong day.

Seriously, that’s the quality of intelligence that these assholes are using to decide who lives and who dies. If Washington’s elite were subjected to similar surveillance we’d probably find that there was a drone-strikable cellular terror organization in operation – and they drive around in black motorcades, going from place to place, and guys that are obviously security operatives are all around them. Fire when the guns bear. 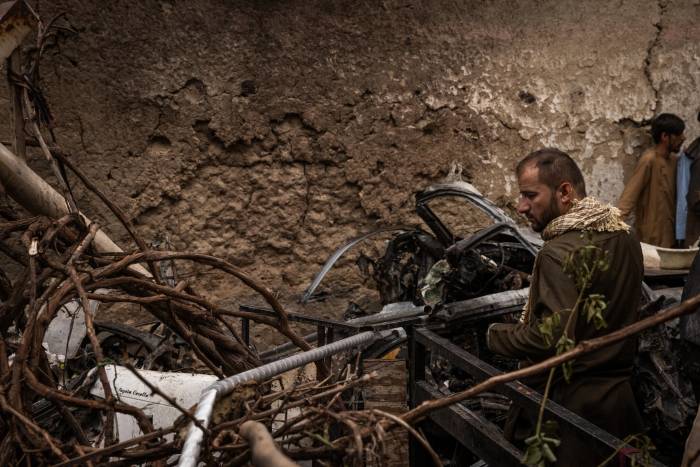 Imagine if the nazis, in WWII, had responded to French Resistance’s efforts by dropping a random bomb in a nearby village, as a reprisal. We’d have hanged the people who did that, after the war. The US will never have a Nuremberg trial for its many war crimes – instead we have president Rump giving presidential pardons to war criminals who were so disgusting that the rest of their unit refused to serve with them. [Probably because they were dangerous fools, and not so much because of moral qualms]