This is from the January 1908 Journal of the American Medical Association. I stumbled across this reference when I was looking to see whether AMA had supported the eugenics movement, or not.

It’s generally interesting to me, the degree to which American “science” frequently embraced pseudo-science, especially in the service of racism or just plain awfulness. The goofy theories of American eugenicists directly instructed one Adolph Hitler, who tried to implement American theories on a grander scale, with horrific results. Separating the racism from eugenics is hard, because the eugenicists were the intellectual servants of racism, but confused it further with religious and classist concepts. Religious, in the sense that “dim-wittedness” was frequently diagnosed via the symptom of having children out of wedlock – as if a silly religious stricture was an indicator of a weak intellect. Classist, in the sense that the poor were as frequently targeted by eugenicists as the non-white – e.x: The Kallikak family, considered to be dim-witted because they were poor, and poor because they were dim-witted. The poverty of the Kallikaks was chalked up to one of the ancestral family-members having had children out of wedlock – and then subsequent generations also had children out of wedlock because, now, they were dim-witted and of course that was inheritable.

It’s really depressing to see how badly they understood cause and effect, frequently reversing them whenever it was convenient to do so – and it remains to this day the primary justification of scientific racism: those people are inherently inferior because they are poor and, oh sure, we made them poor, but it’s their problem for not clawing their way out of poverty. Racists’ flipping of cause and effect  has to be one of the most frustratingly dumbass bits of cognitive malpractice, ever – but it’s understandable that they want to blame their victims; after all it’s hard to feel superior to anyone if you confront the fact that you’ve been lying to yourself about the situation all along.

I think that’s readable enough that I don’t need to transcribe it. [jama] 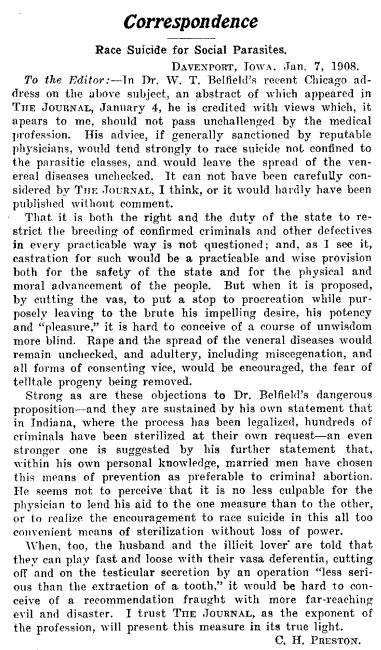 It’s the right and the duty of the state to restrict the breeding of confirmed criminals and other defectives. I’m skeptical. I am also skeptical that the author of the letter understands who the real defectives and criminals are. Still, it’s important to understand that the letter’s author believes that the viewpoint they are advancing is good science. Basically, it’s eugenics in a nutshell.

But the technique of replying to trollishness is also not new:

They’re still with us. That was a pretty solid slam, but bad ideas are incredibly durable.