US corporate bankruptcy laws are tuned to make it easier for polluting companies to walk away from their mess, wash their hands, and move on.

It’s one of those other “market efficiencies” that capitalism is able to squeeze out – by not having to pay for expensive clean-ups, companies can save money! When Biden came into power (not that anyone in their right mind would have expected a wave of activity clamping down on dirty coal and fracking producers, but…) some fossil fuel companies took COVID relief dollars, paid their executives big bonuses, and then shut down. It’s a great final “fuck you, world” gesture for a nihilist.

Polluting companies that were struggling long before the pandemic have been able to access COVID-19 relief through various obscure and complex mechanisms, from tax refunds to Federal Reserve lending programs that lack oversight and transparency. Some companies have been able to access pandemic relief while declaring bankruptcy and laying off staff, even as their executives walk away with millions of dollars.

The Houston, Texas-based global offshore oil and gas drilling contractor filed for bankruptcy in April 2020 after reporting a mass layoff affecting 102 employees and with 2,500 jobs at risk. The company cited the “unprecedented” impact of the oil price war and coronavirus pandemic.

Amid these dire financial straits, Diamond was able to get a $9.7 million handout from taxpayers in the form of a tax refund in the CARES Act, the $2.2 trillion stimulus package passed by Congress and billed as protecting American workers and families from the economic fallout of the pandemic. Yet the tax provision comes with no strings attached, and in July 2020, a bankruptcy court approved the company’s decision to award exactly $9.7 million as bonuses to Diamond’s executives, despite outcry from the company’s own creditors and other bankruptcy lawyers.

I bet the executives of the company are all “fiscal conservatives” and Trump fans, who vote for little government and low taxes – and especially against “socialism” except for when it applies to their ability to line their pockets. Joking aside, I don’t really believe that such people believe in anything except money and power – any beliefs that they purport to have are just self-justifying smoke-screen for the underlying reality that they’re just greedy, selfish, fuckers.

I have mentioned this before [stderr], in the context of just Pennsylvania; at the time Biden and Trump’s marketing bullshit machines were battling over the state, trying to convince its ignorant and blinkered population that coal jobs were going to come back – or were going to be replaced with “green jobs” – neither of which will probably materialize now that the election is over. In Pennsylvania, alone, there are over 200,000 un-abated oil and gas wells, leaking and dribbling various nasty fossil fuels and byproducts into the water and atmosphere. What Biden could and should have been talking about was spinning up a massive program to get the states to use some of the tax money they had cheerfully been siphoning off from the fossil fuel extraction companies’ licenses, to hire the manpower to abate these environmental hazards. But, no, the focus is going to remain on the top-line: how many shit jobs are created. And, in case you hadn’t figured that out already, when I say “shit jobs” I mean it – these will all be “at will” hourly employment, staged so that there are no benefits, so that the workers can be used and discarded. If what happened with the Marcellus Shale exploitation licenses that the state was handing out like little packets of methamphetamine for the economy, those jobs won’t go to Pennsylvania workers, anyhow – it’s going to be migrant fossil fuel workers, the permanent underclass, who work below the wages that a decent job would pay. And it’s a temporary job that will end with a handshake and a muttered, “fuck you” as the capitalists offshore the wealth.

ConsiderWhiting Petroleum, a Denver-based oil and gas company that has benefited from a separate pandemic stimulus effort from the Federal Reserve despite filing for bankruptcy while its CEO walks away with millions.

In 2019, before the pandemic hit, financial hardships caused Whiting to lay off a third of its workforce. By April 2020, it was pushed to bankruptcy. But just days beforehand, the board approved $14.6 million in cash bonuses for top executives, including $6.4 million to departing CEO Brad Holly – on top of a $2.5 million severance after his three year tenure. In its filing, Whiting said the change to its compensation structure was meant to ensure stability and avoid “potential misalignment of interests” for senior executives.

Meanwhile, as part of the Fed’s COVID-19 response, it has established corporate credit facilities to purchase debt that disproportionately includes debt from oil and gas companies, according to an analysis by the nonprofit InfluenceMap.

In May 2020, the Fed reported purchasing $100 million in a high-yield bond Exchange-Traded Fund (ETF), which includes Whiting. Crucially, the Fed does not require corporate bond issuers to maintain payroll as the small business relief in the CARES Act does, nor does it require them to limit executive compensation.

Some people say that the key to being a good capitalist is “buy low, sell high” but that’s not true. The key to being a good capitalist is to establish a situation such that if you win, you win and if you lose, you win. Normal economics, in principle, forbid that as part of some risk/reward balance, but what you see above, when they talk about “aligning interests” is to make it so that the executives stocks or options will be worth millions no matter who else gets fucked in order to arrange it that way.

Mother Jones looks at the issue nation-wide [mj] and I’m not surprised that Pennsylvania is nowhere near as bad as many other parts of the country. [Although, the degree to which it’s bad may be related to whether or not the state tends to break republican]

When an oil or gas well reaches the end of its lifespan, it must be plugged. If it isn’t, the well might leak toxic chemicals into groundwater and spew methane, carbon dioxide, and other pollutants into the atmosphere for years on end.

But plugging a well is no simple task: Cement must be pumped down into it to block the opening, and the tubes connecting it to tanks or pipelines must be removed, along with all the other onsite equipment. Then the top of the well has to be chopped off near the surface and plugged again, and the area around the rig must be cleaned up.

There are nearly 60,000 unplugged wells in Colorado in need of this treatment – each costing $140,000 on average, according to the Carbon Tracker, a climate think tank, in a new report that analyzes oil and gas permitting data. Plugging this many wells will cost a lot – more than $8 billion, the report found. 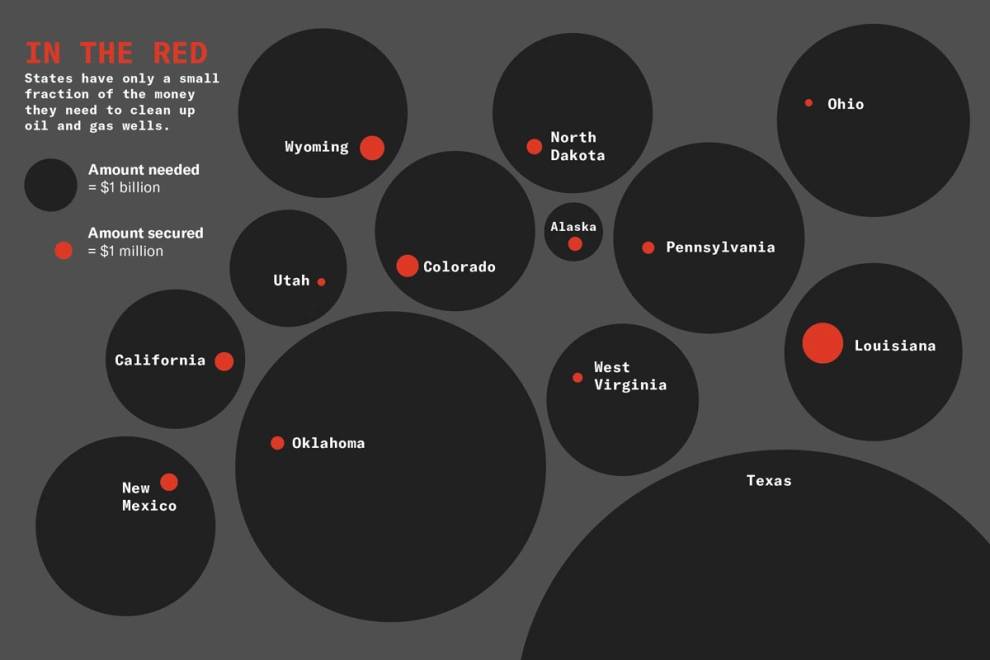 [mother jones] “Texas won’t even fit on your screen”

$8bn is not F-35 money. Hey, actually, the US government could cancel the F-35 and put those people and that money to work abating environmentally disastrous wells. It’s not going to happen, of course, because it’s more important for the US to be prepared to go to war with China (seriously, WTF) than to have clean air, water, and a survivable biosphere.

Companies that drill wells in Colorado are legally required to pay for plugging them. They do so in the form of bonds, which the state can call on to pay for the plugging. But as it stands today, Colorado has only about $185 million from industry – just 2 percent of the estimated cleanup bill, according to the new study. The Colorado Oil and Gas Conservation Commission (COGCC) assumes an average cost of $82,500 per well – lower than the Carbon Tracker’s figure, which factors in issues like well depth. But even using the state’s more conservative number, the overall cleanup would cost nearly $5 billion, of which the money currently available from energy companies would cover less than 5 percent.

Politicians  are going to wring their hands and declaim, “who could have seen this happening?” except that this is exactly the same maneuver that industrial manufacturers pulled, before they relocated their polluting factories to China. US Steel left behind massive superfund cleanup zones, declaring bankruptcy and, incidentally, gobbling up all of their workers’ pensions in the process. “Ha, ha, ha, fuck you!” said the capitalists. Nobody saw that coming, either, except for everyone who was watching.

When it comes to cleanup, Colorado uses a tiered system known as blanket bonding. Small operators can pay ahead with bonds on single wells. Drillers with more than 100 wells statewide pay a fixed reclamation fee of $100,000, regardless of the number of wells.

Oh, look: a handout to the fossil fuels producers. “No, there’s no need for you to pay actual costs, (wink) (wink) besides you’re going to pump until you can pay bonuses and go bankrupt to this is all hypothetical anyway!” It’s the quintessence of “kicking the can down the road” – politicians know that they can claim to be revitalizing the economy while what they’re doing is writing a check that future generations will have to cover.

When a driller walks away or cannot pay for cleanup, the well enters the state’s Orphan Well Program, which works to identify and plug these wells. There are about 200 wells in the program right now, according to the state. But a closer look at state data reveals a large number of wells at risk. Nearly half of the state’s unplugged wells are stripper wells – low-producing operations with small profit margins often at the end of their lifespans. These wells are particularly vulnerable to shifts in oil prices. That means they change hands often. “This is a common tactic in the oil and gas industry: Spinning off liabilities to progressively weaker companies, until the final owner goes bankrupt and none of the previous owners are on the hook for cleanup,” said Clark Williams-Derry, a finance analyst with the Institute for Energy Economics and Financial Analysis.

“Spinning off liabilities” would be “fraud” if it weren’t being done by business-people in expensive suits in expensive board-rooms who spend millions to buy politicians’ souls and then cry ‘poor’ when the wells run dry – because the money has already been spent.