We – those of us who are not blinkered and stupid – need to beat the hell out of the drums on the coronavirus vaccines because it’s an incontrovertible example of how science can work.

I know, there are resugent anti-vaxers and republicans who want to promote ignorance, but the numbers speak for themselves: 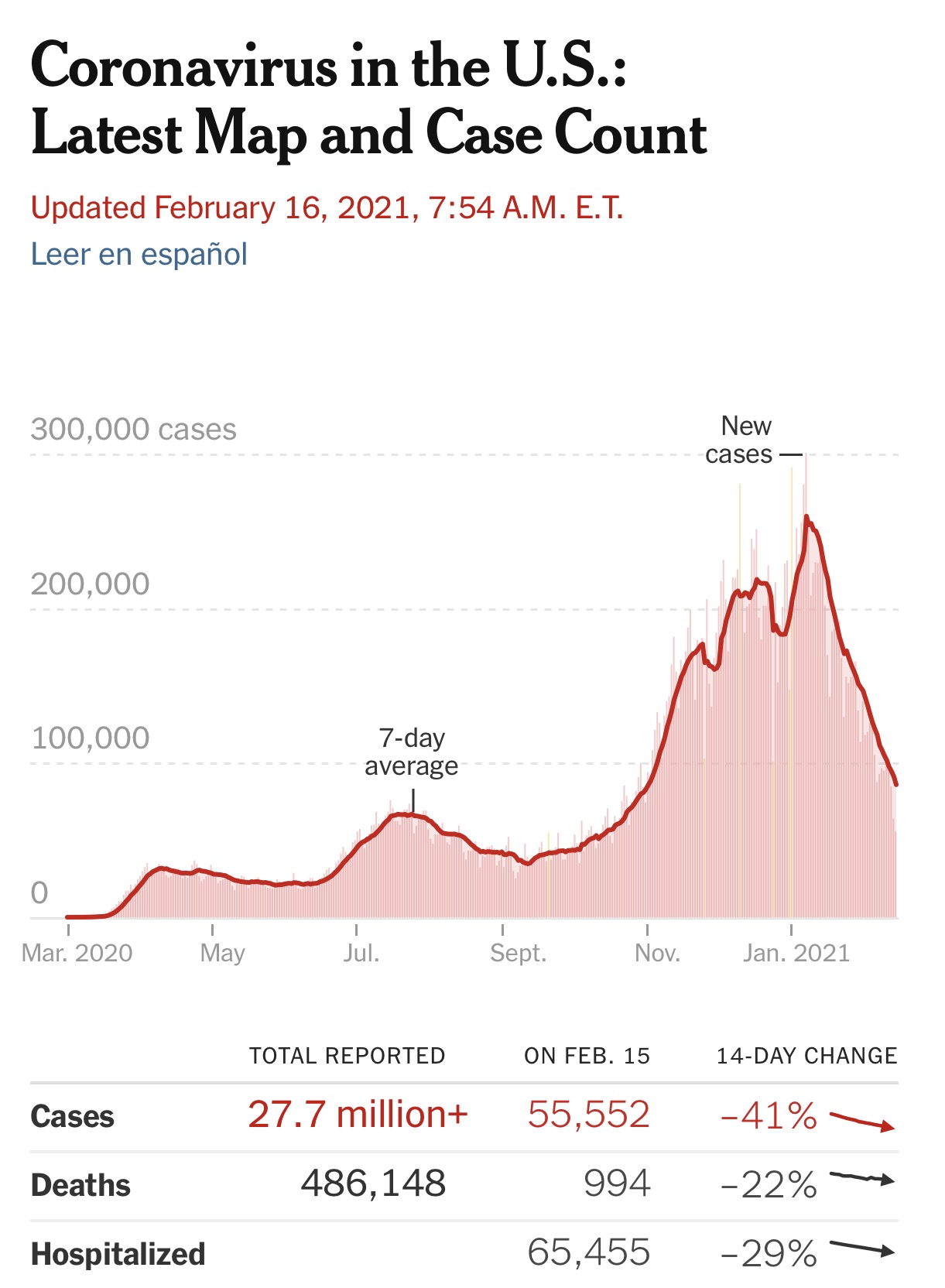 The bottom is falling out of the coronavirus outbreak, to the point where we’re not a bunch of chucklefucks, anymore. What I’m saying is that it’s down around where it ought to have been, at its worst, if the country wasn’t 20% imbeciles run my corrupt reality-denying political nihilists who decided to use a pandemic as an election issue.

A friend of mine’s mom apparently started making the “I don’t know about the vaccine…” dance and I formulated my non-obscenity-laden response, which is:

Listen, you. The vaccine has been tested, now, in over 30 million people. Sure, there have been a few people who have exhibited side effects, but “side effects” are what ‘developing immunity’ is. You have to expect some people will get muscle aches or rashes – so what, it’s what your body does while it’s preparing to not get COVID-19. Meanwhile, over 40 million people have gotten COVID-19 and over 450,000 have actually died. Don’t worry if your car’s airbags might break your glasses while they’re protecting you from hitting your face on the steering wheel at 70mph, OK?

When the outbreak started, there was a lot of questioning about how long it would take to make a vaccine. And science delivered remarkably well. In the meantime, the forces of stupidity and incompetence actively made things worse, in order to … I don’t get it but somehow they think it made them look better? No, really, what the fuck just happened here?

The 2020 pandemic was well-instrumented and generally scientists have pretty good data about the outbreak, and how and where it happened. They can map “superspreader” events and verify that, indeed, they were right that partying in a disco while expressing virus is a bad idea for everyone. They will continue to map and analyze this and I predict that some results will come out clearly: republican-governed states experienced worse outcomes, republican leaders tried to make other states experience bad outcomes, too, so they wouldn’t look as obviously incompetent, anti-vaxxers are liars because the massive scale of the vaccine deployment has demonstrated remarkably few side-effects, and COVID-19 killed a lot of people. Unfortunately we will see that COVID-19 killed disproportionately black and poor people in republican states – no surprise there. We will see that the rich fared better and did not hesitate to use their wealth to shove to the front of the line while simultaneously saying that there was no pandemic and “what are you all lining up for?”

As I’ve said elsewhere: the pandemic is a case-study of how badly humans respond to species-wide disasters and it shows that we are going to screw the pooch horribly when it comes to climate change, and we’ll probably go extinct as a species because, well, don’t forget to eat the conservatives first.

None of this had to happen. This was all a horrible science experiment run by morons. Make sure you thank them appropriately. Seriously, if I had a relative who died of COVID-19 because they listened to some gobshite who pushed hydroxychloroquine instead of social isolation and PPE, I’d be tempted to take a baseball bat to their face. It’s self-defense. We’re going to have to deal with the same people when global warming starts to kill, and they’re going to do even worse damage. None of that had to happen, either. Humans have known about the problem with carbon dioxide emissions since WWII. There was plenty of time to stop fighting, stop drilling and pumping, and build windmills. Now, it’s probably too late. If you have conservative friends and family, it’s time to upgrade or replace.

Future War – Combat Robots » « In Which I Become An Elonista