Simply put: it’s a maneuver to delay until another news cycle has passed. You can charge anyone for anything – even a president for attempting to steal the government – but it doesn’t matter if it’s just an attempt to deflect the whole incident.

There’s a chain of events, each of which is a junction-point that can be mooted once the eye of the camera has turned away. Charge a cop? Watch the evidence get lost, or the grand jury instructed that the only charge that might be applied to the cop is jay-walking. Convict a cop? Watch them get unsupervised release 2 months later, even if all they did was shoot an unarmed citizen in the face. Fire a cop? Watch them get a job at the police department in the next county over the line – a short commute away. It makes a complete mockery of justice in a system that also has people waiting out life sentences because of “three strikes and you’re out” – they sold reefer a couple times and they’re behind bars for life, but a cop who incompetently ends a life is back on the street and their career is barely damaged.

Is there a solution? Other than bloody Vietcong-style insurgency aimed at making being a “police officer” a short-lived and undesirable job, probably not. But the one avenue that appears to have a chance of going somewhere, goes over top of the police unions. Local politicians need to, simply put, not negotiate with police unions. Republicans ought to go along with that, because if there was ever a corrupt union for conservatives to hate, it’s police, right? Right? Hm, maybe republicans just like police because it’s “professional courtesy” among racists.

I don’t track these stories as closely as folks like Radley Balko (who must be depressed or quivering with rage all of the time) but if you look at the output of someone like Radley, it’s just an endless Cloaca Maxima of effluvium, running down-stream along race and class lines. As Gomer Pyle said, “well, surprise, surprise, surprise!” 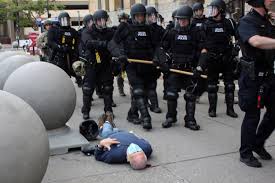 The video is horrible. An old guy walks toward some cops, who shove him, and his skull cracks as it hits concrete. The cops walk by, offering no assistance to the victim. The media airs the incident. The officers are suspended and eventually charged. Then, the city of Buffalo waits until nobody’s looking and dismisses the charges against the cops. I bet you never saw that coming.

These heroes (2 of them) kicked the ass of a 75-year-old man, damaging him for the rest of his life. “Protect and serve” forsooth; they sure served him raw. [abc]

The grand jury proceedings are sealed and Flynn was unable to elaborate on what happened, but he said prosecutors “put all relevant evidence” before the grand jury, including multiple witnesses.

I bet they did. It was probably a typical case of American Blind Justice, per Arlo Guthrie. I’m guessing that the grand jury was not composed on random people off the street. Maybe they selected the jurors from the police union’s supporter club or something. This has happened before; it was a sandbagged case. They did the same thing in Baltimore, for the cops who murdered Freddie Gray. They do it over and over and sometimes they’re sloppy and there are complaints but justice has been “done” and, by done, I mean shoved down on concrete with a cracked skull, while literal jackbooted thugs walk by, dispassionate in the knowledge that the system’s got their back.

Fuck the system. Fuck it completely.

Someone bungied in here briefly a few months ago and tone trolled me because I sounded like I was saying “all cops are bastards.” Being a writer, my keyboard my weapon, I rose to the challenge – which was a waste of time because they vanished after dropping a smelly fewmet of “not all cops” etc. Well, let me say this: not all cops are bastards. Sometimes, the entire system in a particular town is a bastard. That means the city council, representatives, mayor, etc. – they are all willing to continue funneling money to the police who beat the shit out of the citizens. You know, and I know, that it’d be different if the cops did that kind of thing to a mayor or two. So, to forestall complaints: the system is a bastard; all cops are part of the system therefore all cops are bastards.

Thomas Burton, the attorney for McCabe, told ABC News they are focused on getting the officers “back in the saddle where they belong.”

I guess it’s OK to say these sorts of things with impunity, but someone needs to burn Rochester’s police buildings and state houses. Peacefully.