Voyager’s dog-friend Jack is a featured character over at Affinity [aff] and, as a great fan of dogs in general, I wanted to do something fun for Jack. This has been brewing for nearly a year, as I subconsciously chewed on the technical problems.

[There was also a fur removal device – stderr] I thought it would be cool to make a paw-imprint mold, and then experiment with resin castings. Technical problems immediately crop up most of the methods for life-casting involve a living person or animal, which has to be still while the castings cure. Even if you’re life-casting a child, you have to be careful of the subject deciding to go on a jaunt through the house, making prints or leaving splashy gobbets of casting materials.

The primary casting materials that give good detail are silicone or alginate. Both of these start off as thickish gooey liquid that solidifies in 10 minutes or so. Asking a dog (even if the dog is a Very Good Boy) to hold a paw in a tray of goop without lifting it up for a brief investigatory sniff is probably unreasonable. Picture, if you will, a largeish dog making goop-prints at high speed through a house – it does not bear imagining as it’s undignified for all involved. 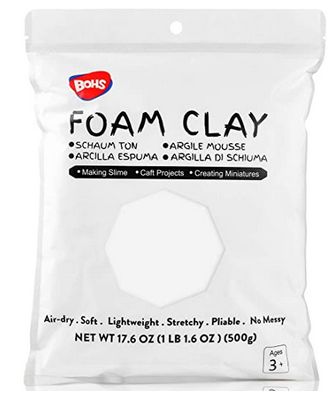 One possibility was foam clay. I’ve used the stuff before and it’s capable of taking a fairly precise impression; I remembered seeing my fingerprints clearly in the material. That’s a good benchmark for how well a material lifts an impression. So, I got some and experimented with thinning it a bit with water – the idea was to make it soft enough that the great dog’s paw could just be pressed into it for a second, then removed with everyone’s dignity (ideally) still intact. After some experimenting, I concluded it would work, so I made a small polypropylene block frame and a rammer (so Voyager could press the clay flat into the frame, sort of an “undo” stick) and boxed the whole mess up, with some semi-coherent usage directions, and turned it over to the gentle mercies of the US Mail.

Some weeks later, I got a box back! A box containing unknown success – Voyager said that it appears to have made a good impression but there was going to be some dog hair in it: situation unknown. Rather than stressing about it, she simply wrapped the whole mess up and mailed it back. 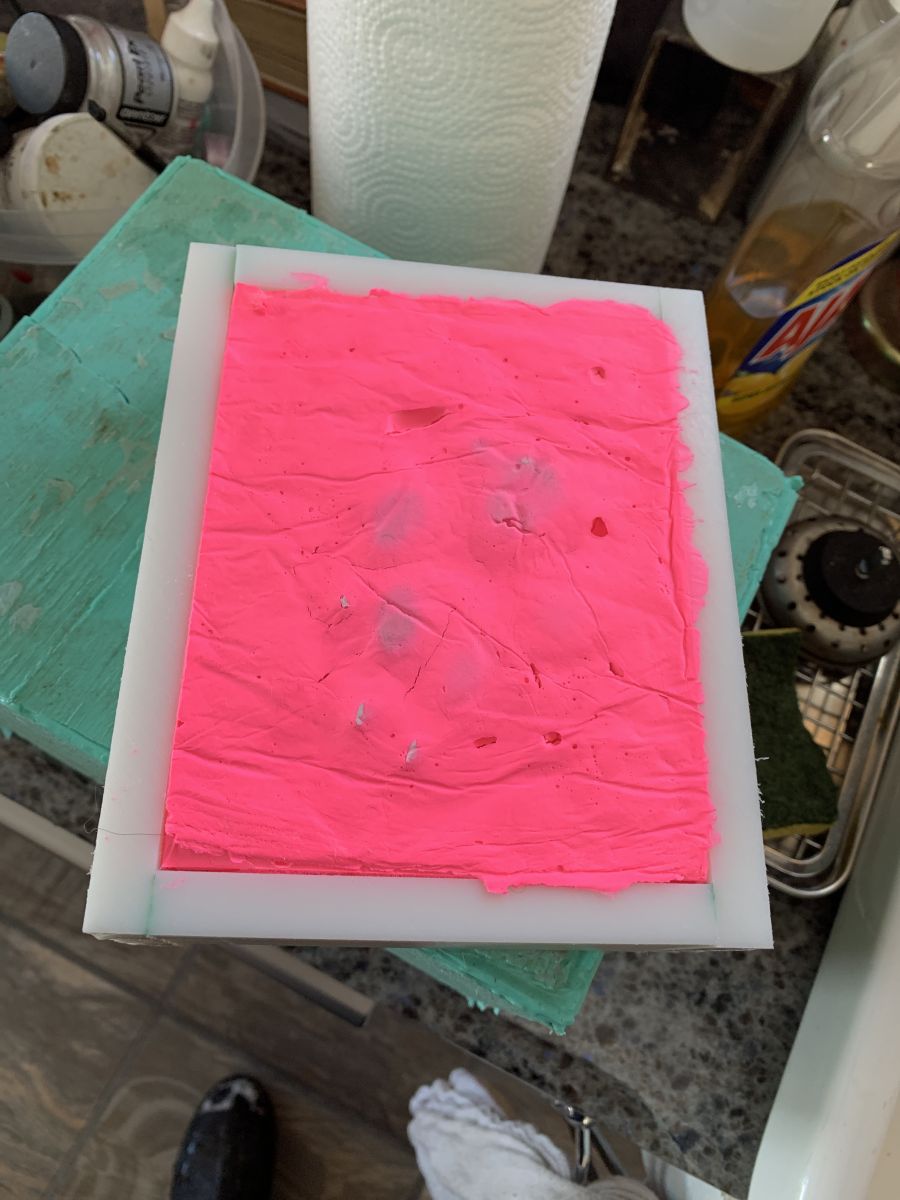 This looks promising! It’s pretty apparent that what I am looking at is the under-side of a dog’s paw-print. The upper-side of the print is in the frame, on the other side of the clay (the pink stuff) in plaster. The plaster is the unknown.

I’ve done this sort of thing before (but never with this combination of medium; I prefer alginate or silicone – but, what I know for sure is that there’s always a matter of picking and fiddling and then minor sculpting, filling, bubble-filling, texturing, and scraping away things that aren’t right.

Alginate and silicone don’t stick to anything except hair, nice towels, or clothes, so they peel off fairly well. This clay was wet and water-based so it bonded very well to the plaster. It turned out that I could peel smallish chunks off but eventually I got down to close to the plaster and had to switch to a little polypropylene dentists’ scraper, which I could use to loosen the clay and periodically dump it on my pants, aiming at the garbage can. The real question, to me, is what the close contact texture looks like. Around this time, I was starting to despair a bit. It looks like a paw-print, which is good, but it’s lost all the fine details. 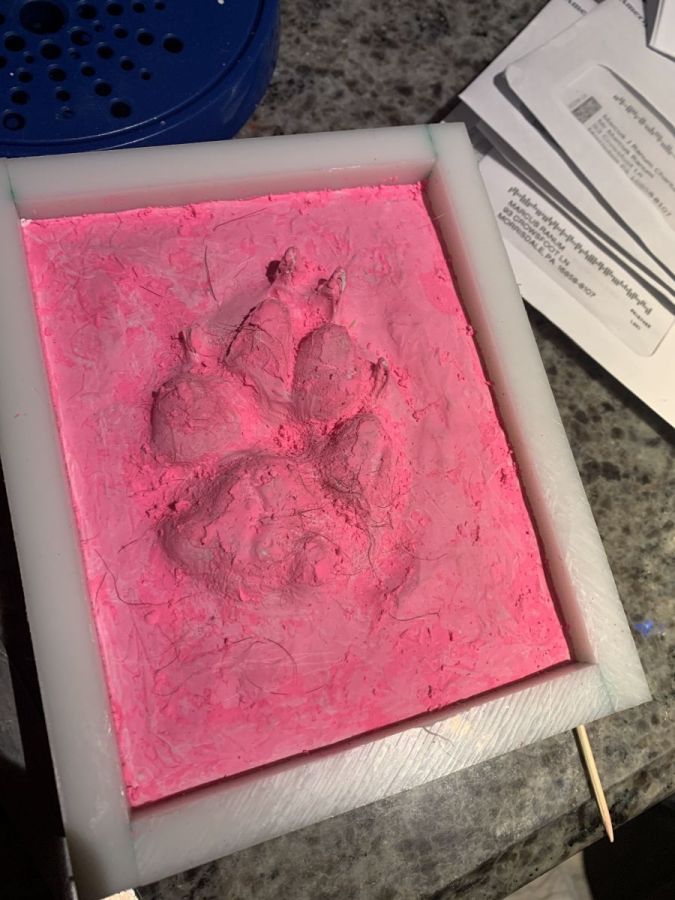 This is something I’ve been working on, on and off, not pushing hard. Basically, it’s “something to do while waiting for the tea-water to boil” or while listening to a podcast.

The next stage was to put on a pair of head-mounted viewing lenses and grab some tweezers to remove the dog hair. After that I took a deep breath and plunged the whole thing into soapy water for a while, brushing it with an old toothbrush (toothbrushes are great because they’re designed not to abrade teeth!) I needed to get that top layer of clay off and get at the detail in the transition-zone. 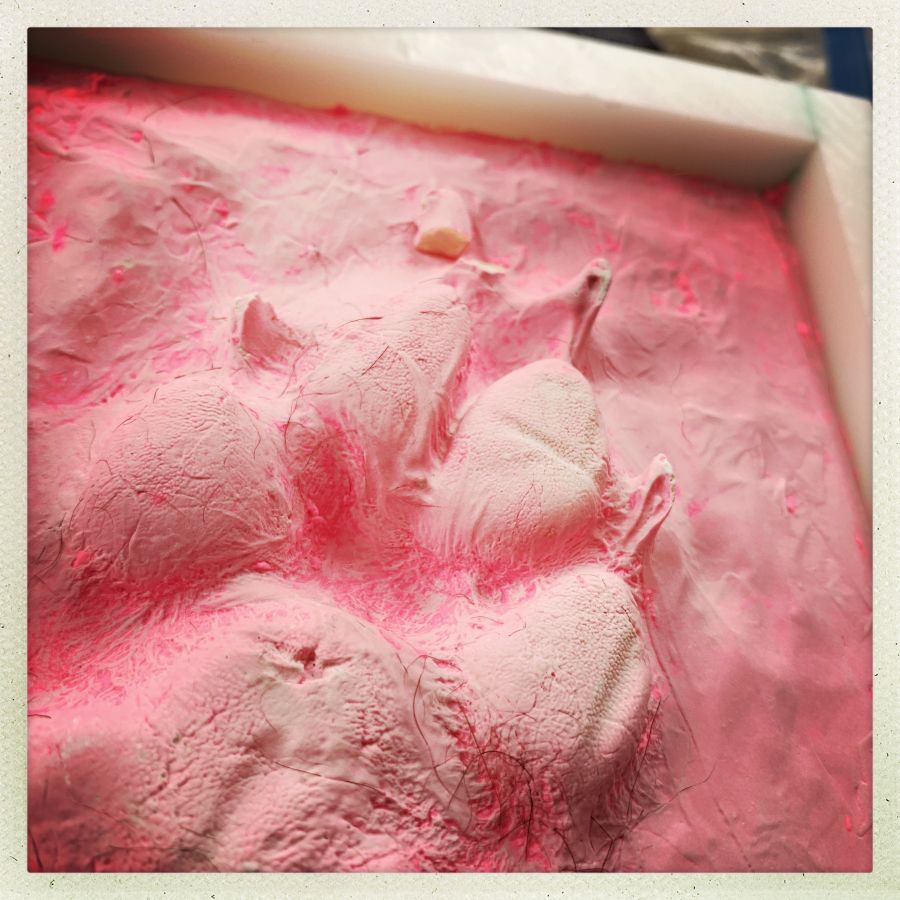 Well, one of the claw-tips broke off but it’ll epoxy right back no problem. Look at the details in the underside of the nails! Success!

There are a few spots which appear to be bubbles, i.e.: that hole in the base pad, top dead center. I’ll push a bit of plasticine clay into the hole and texture it and it’ll look fine.

Current state of play is not shown. I am waiting for the plaster to dry thoroughly and then I’ll do some clay tweaking and set the whole thing in a frame and pour silicone around it. Once I have a silicone mold, I’ll have a pixel-perfect reproduction that I can work with, and not have to risk damaging the plaster. Unless Voyager wants it back, I’ll wrap the plaster in butcher’s paper, label it, and put it on my Shelf Of Plaster Originals Of Stuff over at the studio, where it will sit in darkness until someone auctions off my junk when I die. I enjoy imagining the shock on their faces, but unfortunately I’ll miss it.

Next update on this project will be in a couple weeks, maybe. I store my silicone in the basement and in the winter it gets to be just above freezing down there; I need to bring things up and let them come slowly up to room temperature, which takes a day or two. And there’s the clay sculpting and curing and then I’ll have to carefully pull the plaster from the silicone and we’ll see what we see, shall we?

A Torn Out Bunghole » « Stealing Elections