Depending on how you count it, the numbers may not be exact. The records of what happened are not as good as they ought to be, for reasons that will become clear.

A few months ago, I posted a piece about the Battle of Blair Mountain [stderr] – an American “riot” or labor insurgency, or violent strike. If you’re really interested in this topic (and, believe me, this topic is interesting!) I suggest The Devil is Here In These Hills by James Green [wc] which has plenty of details. The wikipedia article [wik] is also pretty thorough though it lacks the narrative quality of Green’s book. 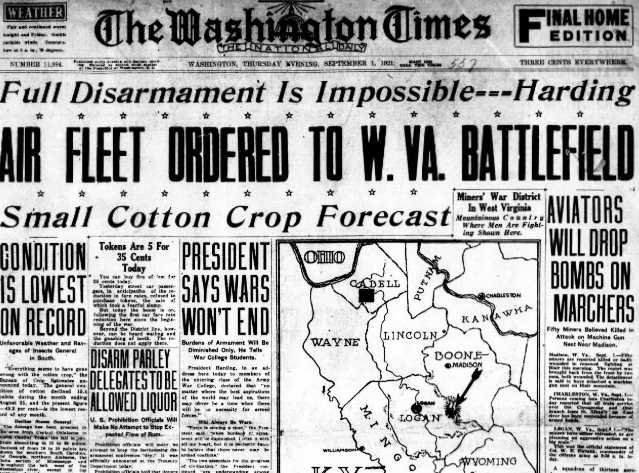 Initially, when the miners began to strike, the security forces of the mining companies and local law enforcement, were not prepared for a response of that size. But, they quickly bulked up, hired gunslingers and strike-breakers, and the US military got involved. Billy Mitchell, the Air Force “hero” of WWI, who was trying to demonstrate the usefulness of an Air Force for many things – including domestic insurgency – sent several aircraft down, which strafed, pipe-bombed, and dropped surplus military tear gas left over from WWI on the strikers. I must add that it was an early example of how the Air Force continually insists that insurgencies can be weeded out with bombs dropped by cowards on civilians – and, presciently, it failed. Bombing American coal miners into submission is no easier than bombing ISIS into submission.

But what I’m here to talk about today is the aftermath. Today is a good day to talk about the aftermath of insurgencies, for reasons I don’t need to harp upon. I suppose I am trying to deliver a cautionary tale for a) The Air Force and b) insurgents. The insurgents were not backing a line of “free speech” or anything that naive – they were being worked at starvation wages in a captive economy, beaten and machine-gunned by mine company heavies; they had nothing left to lose so they decided to fight. At its height, the coal war had about 30,000 striking miners under arms, several hundred of whom were killed in the uprising.

After that, they faced the justice of the conqueror.

The power of the United Mine Workers union was conclusively broken and its membership plummeted from around 50,000 to under 10,000. Of the insurgents, Wikipedia says:

After the battle, 985 miners were indicted for murder, conspiracy to commit murder, accessory to murder, and treason against the state of West Virginia. Though some were acquitted by sympathetic juries, others were imprisoned for years. The last was paroled in 1925. At Blizzard’s trial, the unexploded bomb was used as evidence of the government and companies’ brutality, and he was acquitted.

The number 1200 that I headed the posting with, is an approximate number when you add the other union organizers and union journalists who were also arrested and tried; the boot did not just stomp down on the miners, the battle of Blair Mountain triggered a general wave of anti-union repression and turned “socialism” into a bugaboo that republicans still use to scare their constituents to this day.

The Wikipedia entry does not go into detail about the prosecutions, but there were some interesting ‘innovations’ there, as well. The US Government apparently felt it didn’t have enough prosecutiorial bandwidth to be able to handle so many cases, so it let the mining companies provide attorneys for the prosecution. Apparently, the mining company lawyers were completely unqualified to try such cases, so they made some fairly incompetent arguments based on dodgy jurisprudence, but they won anyway. (The 1200 number also includes the miners who were not convicted) – you’ll notice that some of the convictions were for treason – a capital crime. I can’t find anything about whether any of the miners were executed.

Granted, grabbing a military Krag bolt-action rifle and marching on a company headquarters is not protected free speech, Violence isn’t protected and clearly the US collectively needs to decide whether carrying a rifle is a threat or speech. My highly nuanced view is that it is speech, it’s threatening speech and there’s no reason to bring a rifle to a protest unless you are trying to intimidate someone. 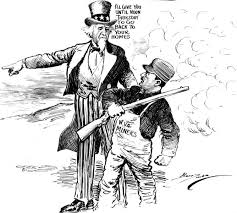 “I’ll give you until next Tuesday to go back to your homes.”

It turns out that the folks at Wondery’s American History Storytellers have decided to do a series about the coal wars. It’s their usual fine but slightly overproduced stuff (Congratulations, Wondery for getting bought by amazon.com for [verge] what is doubtless a fuck-ton of money) it’s pretty good and it’s here: [wondery]

In April, 1922, Blizzard’s trial began in Charlestown, WV. The prosecution was handled not by district attorneys but by lawyers hired by the coal operators. They set out to portray Blizzard as the mastermind of an army insurrection against the state government.

But the prosecution faced an uphill battle trying to paint Blizzard as a traitor. The presiding judge reminded the jury that an act of violence was only treasonous if its purpose was to undermine the government. The West Virginia state constitution narrowly defined “treason” as “Levying war against the state” The defense argued that the miners’ fight was not with the state government, but with the corrupt coal companies and Logan County authorities. The defense attorneys reminded the jury that, rather than trying to overthrow the government, the miners had repeatedly appealed to Governor Morgan to intervene with a peaceful solution.

Meanwhile, the prosecution relied on witnesses who said that Blizzard was in command of the marchers, but the defense easily poked holes in their testimony during cross-examination. One witness said he’d never heard the miners planning to overthrow the government. They’d simply declared that they wanted to “get” the Logan County thugs and protect their women and children. On May 25, 1922, the jury delivered a verdict of “Not Guilty.”

By the way, Congress’ republicans deliberately avoided letting the coal war reach the level of requiring a congressional decision, because they were concerned that the close relationships between the coal companies and the republican representatives might look bad.

Of course, I am resurrecting these events because today’s news cycle is full of a very different story of treason and insurrection. Today’s crop of insurrectionists left (though they are frantically scrubbing) traces all over social media talking about exactly how they hoped to overthrow the federal government. Naturally, congressional republicans are still deliberately avoiding taking responsibility for any involvement they may have had, except for the few who were so stupid that they posted footage of themselves rioting inside the building. And, of course, the Air Force didn’t get involved, because it was a right-wing coup attempt, not a bunch of socialists and union activists.

In a sad coda to the Blair Mountain battle, the location, today, is contested. [progressive]

But the Battle of Blair Mountain is not over. Today, the subject is not miners’ rights but the survival of a mountain that has stood for nearly a century as a symbol of workers’ resistance to overwhelming opposition. For years, Blair Mountain has been under assault by such corporations as Natural Resource Partners L.P. and Arch Coal, Inc. – large absentee conglomerates that own most of the battlefield’s nearly 1,700 acres.

These companies have in turn leased the land to Alpha Natural Resources and its subsidiary Aracoma Coal Company, who have obtained permits to extract coal from the area using the mountaintop removal system of mining. This is a form of surface mining in which coal companies clear-cut trees and blast away the mountain in layers from the top down, dumping rock and other waste byproducts into nearby valleys, until the site’s coal has been completely removed.

Can you imagine the shit-fits that American chucklefucks would throw if the battlefield was a civil war battlefield, where their plentiful and precious dead had watered the grass?

Ultimately, the mining company and union merely agreed to create an eight-acre park on the mountain’s north ridge.

Naturally, that was nowhere near good enough, but even the eight-acre park was never built.

In terms of irony, I have to say that the picture of the woman carrying a flag that said “don’t tread on me” who later was trampled to death by her own side… well, it’s a tragedy but it’s also pretty cringe-worthy.

Meanwhile, the “free speech” issue is about to come front and center, thanks to Amazon de-hosting Parler, Google and Apple removing the Parler app, and Twitter de-platforming Trump. Free speech is not really the issue: organizing an insurrection is. Prior to the Battle of Blair Mountain, as part of the run-up to the US getting involved in WWI, socialist newspapers and union journals were forcibly shut down by the government (“Congress shall make no law respecting an establishment of religion, or prohibiting the free exercise thereof; or abridging the freedom of speech, or of the press; or the right of the people peaceably to assemble, and to petition the Government for a redress of grievances.”) and Eugene V. Debs was imprisoned for sedition because he said the US should stay out of the war. Debs’ argument was that the European powers were an extended family of squabbling aristocrats – which was, basically, true. If the US had stayed out of WWI, WWII would have never happened, but who’s keeping score and who knows what horrible events might have happened instead?