He tells the story of “allah’s balls” an electro-interference IED detonator-device:

“Allah’s Balls” are two giant metal spheres that create some kind of electromagnetic discharge that fries or blows up IEDs. It looks like a giant pair of metal balls. The problem is that it’s not as reliable as brute force methods like mine rollers. If you do a great job with 90% of the IEDs, but miss 10% or whatever, it’s a bad solution. The way they were mounted to the Buffaloes, they were also too close to the front of the vehicle, so the drivers would get concussions and other brain injuries because the IEDs would explode when they were too close. My brother (a Captain), tossed them into a scrap heap, even though he had been directed to use “The Balls of Allah” for route clearance. A Lt. Colonel came by late one night after my brother had a bad day, and demanded to know why they were in the scrap pile. Since he referred to them by their official name, my brother was initially confused, but eventually realized what he was talking about. “You’re talking about The Balls of Allah?!?!?!? It doesn’t fucking work! You idiots are trying to kill us!” Then there was a long expletive-laden argument about how they worked great in “field tests” (my brother’s reply: “THIS IS THE FIELD, MOTHERFUCKER!!!”).

I am fairly sure, from the description, that we are talking about the: JOLLER-C IED Experiment. The US military, with infinitely deep pockets, went on a buying-binge in which they tried a bunch of scammy woo-products. [stderr] – they even bought some dowsing rods that were supposedly tuned to high explosive. I hope nobody got killed trying to use this sort of bullshit technology.

Through the magic of the internet, I found a copy of the manufacturer’s pitch deck. [ae-ip] It’s typical unreadable DoD-compliant powerpoint, but here are a few slides: 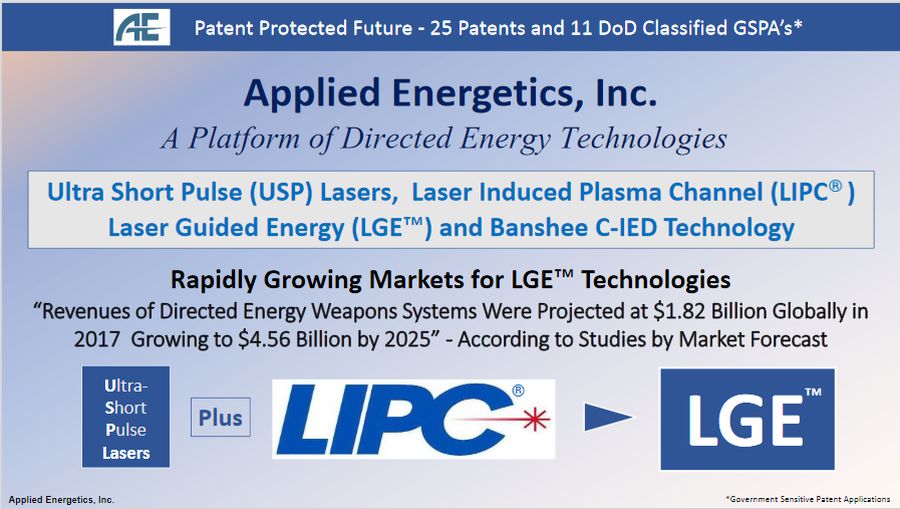 “patent protected” is procurement code for “sole source”; they are implying that they’re going to be the only people offering this solution against a $1.82 billion market. Uh huh.

It’s possible that these people are sincere. They may be bad scientists. Or, they may be charlatans. If the military was deploying this stuff and experimenting with it in the field, I hope that nobody got hurt; I’d be pretty annoyed if someone was expecting me to use experimental woo-products instead of something that might actually work. Note: IEDs are a difficult problem, especially if they are remote-fired by a human controller. They work and they work because they are hard to detect. The solution is to use magic: 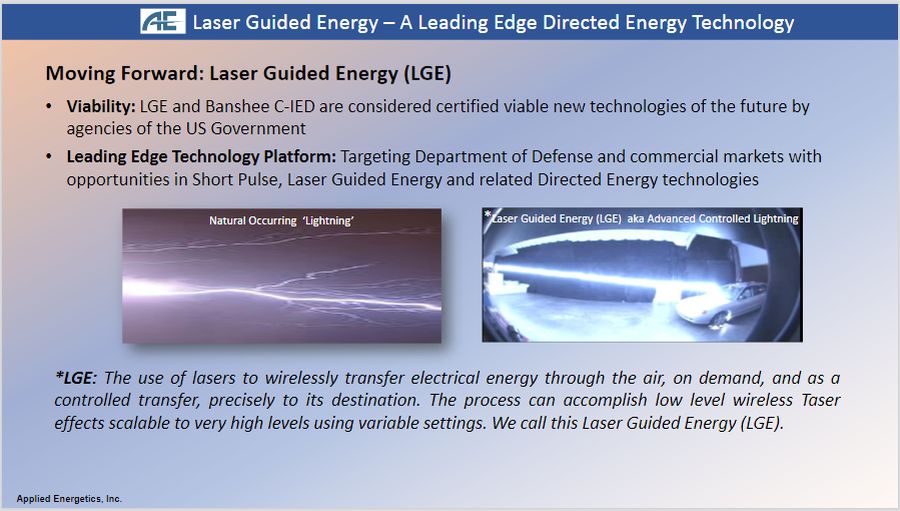 “are considered certified viable new technologies of the future by agencies of the US Government.”

Certified viable? I am aware of no government agency that certifies technologies as viable or not, let alone “technology of the future.”

Laser guided energy sounds interesting. What does it do, ionize a candidate path with a laser, to make it easier to arc where you want it? I thought that getting energy through air is a big problem for energy weapons so I’d want to understand how laser guiding helps and how much. If. 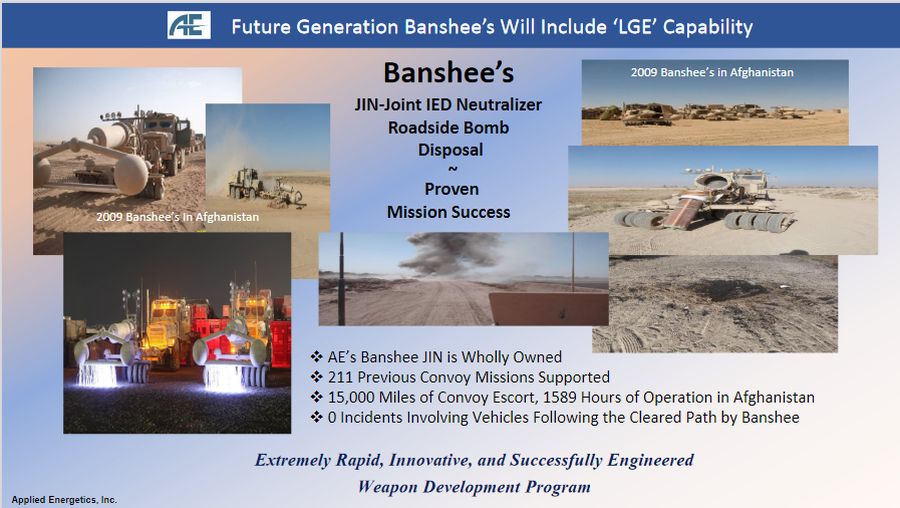 The photo at the bottom left looks like it’s been photoshopped (or more likely they left the camera’s shutter open and captured an extended set of discharges). But the thing that jumps out at me is the rows of mine-sweep wheels – a normal add-on for an MRAP in some places – I wonder if they’re what is really sweeping the IEDs. Note that it’s a “future” version of Banshee that will have laser-guided energy; this version has the good old-fashioned unguided energy.  [publicintegrity]

After receiving more than $50 million in government contracts, a company that once promised to revolutionize warfare with a weapon that shoots lightning bolts is seeing its hopes for further federal funds vaporized.

The U.S. Marine Corps recently ended a contract with Applied Energetics, a Tucson-based firm that has been working for years on directed energy weapons for the military, iWatch News has learned. The company’s efforts were detailed earlier this year in a Center piece on the Pentagon’s troubled unit designed to fight roadside bombs, the Joint Improvised Explosive Device Defeat Organization, or JIEDDO.

The terminated Marine contract was for an Applied Energetics weapon designed to zap roadside bombs with bolts of lightning guided by ultra-short pulsed lasers; the company’s work on the weapon and similar systems had attracted $54 million in federal funds since 2005.

The latest contract was terminated “for convenience of the government due to the material solution not adequately meeting the requirement,” wrote Jim Katzaman, a spokesman for Marine Corps Systems.

“terminated “for convenience of the government due to the material solution not adequately meeting the requirement,”” is great justification for discontinuing the use of a technology, or even a president. It’s not exactly that the solution doesn’t work; it just doesn’t work on this problem. Go find some other problem you can sell us this thing for, and we’ll buy another $50mn worth.

I believe the current generation use ground penetrating radar and magnetic field measurement. It seems as though pressure-triggered IEDs are tripped by having a wheeled vehicle designed to resist explosions towed across them.

Back to the unfortunate Banshee – I am also curious about the mechanism by which the IED is defeated. So, it looks like a lot of high voltage current running around between the scrotum-probe and the ground, and …? Does it heat things up? That might destroy the firing circuit of an IED so that it won’t go off. Or, what if it makes blasting caps detonate? Or if it destroys the batteries in the firing circuit so that it will never go off. Do we know there is an IED there, if there’s no massive explosion? I assume yes, but this is an army we’re talking about. If someone already knows the IED is there, why not drag a roller over it and try to set it off? No need to bake it through the ground – I’m not sure I entirely see the point of doing that. I also assume that the Banshee wasn’t beaming death-rays at the ground the whole time, so there was some other kind of IED detection in place before the Banshee came along (in which case: why have the Banshee). It doesn’t make any sense to leave unexploded explosives in the ground so they need to be detonated – digging them up sounds riskier than watching a large explosion from a distance.

What I’m getting at is that I’m having trouble seeing the purpose of the Banshee. Never mind whether it works or not, why is it, at all? I know “its purpose is to transfer money from here to there” is always a good answer for something to do with defense procurement, but it doesn’t appear anyone asked the basic question about this thing. “So what?” 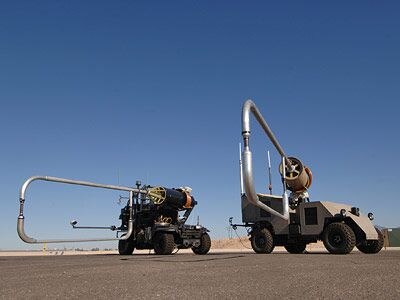 You’re probably shocked to hear this, but the laser directed energy guys are still around under a newer, better name. [popsci] Now they are testing laser guns for airplanes. Imagine mating one of these things to an F-35! It looks stealthy and aerodynamic as all tootsie.

I wonder what the taxpayers paid for those.

Glass Bacteria and Trilobites » « Call It The “Ambush Vehicle.”