Schedules have been squishing around, here. Q was planning on showing up next week but was free now, so he arrived last night. I had a beer and he fried some fungus [chicken of the woods] he picked up in Moshannon state park and we schemed a bit. Having had the experience of nearly crapping myself to death after eating a wild mushroom, I had some heat and eat curry and rice while I watched him prepare his doom.

First, some unpleasantness. When I took the wok over to the shop to weld the safety bumps on, I left the MIG machine at the settings I usually use, which is for welding large billets of steel. The plasma arc instantly blew a great big hole right through the bottom of the pan, completely ruining it. You know the expression “my mind was a blank” – well, my mind was a blank. I just put everything away and pretended it hadn’t happened. Not the best response, I know, but it was a response. It wasn’t until later that might that my subconscious worked out that the handle is held on with 3 pan-head aluminum rivets, which can be drilled out and the handle can be moved to an entirely different wok. Now, I am waiting for the replacement wok and sourcing the right length rivets (which I do not keep in stock). The situation is salvageable so I am feeling a bit better.

Meanwhile, a few months ago, the phone company upgraded the poles that go down Deer Creek Rd, which is the front of my property, and they asked me if I wanted the old poles. Naturally, “Yes! Thank you!” What kid hasn’t always dreamed of having their own telephone pole collection? The neighbor swung by a couple days later and asked if I had plans for the poles, because he could sure use them – telephone poles make great anchor-poles at the corner of horse fences. I said he could have all but 2 if he’d do me a small favor. See, he’s got a back-hoe. And back-hoes are the original “get things done” implement around here. Everything was arranged and I put up some little neon flags where I wanted to poles installed. Out here, we get pretty good frost heave in the winter, so a pole or a rock should be 3′ down in the ground if you want it to stay put; otherwise they eventually pop right out in a most embarrassing way.

“If life gives you telephone poles, stick ’em upright in the ground,” that’s what I always say. In life, you’ve got to know how to spin on a dime. This is not what we planned to do, but the wok is not operational. 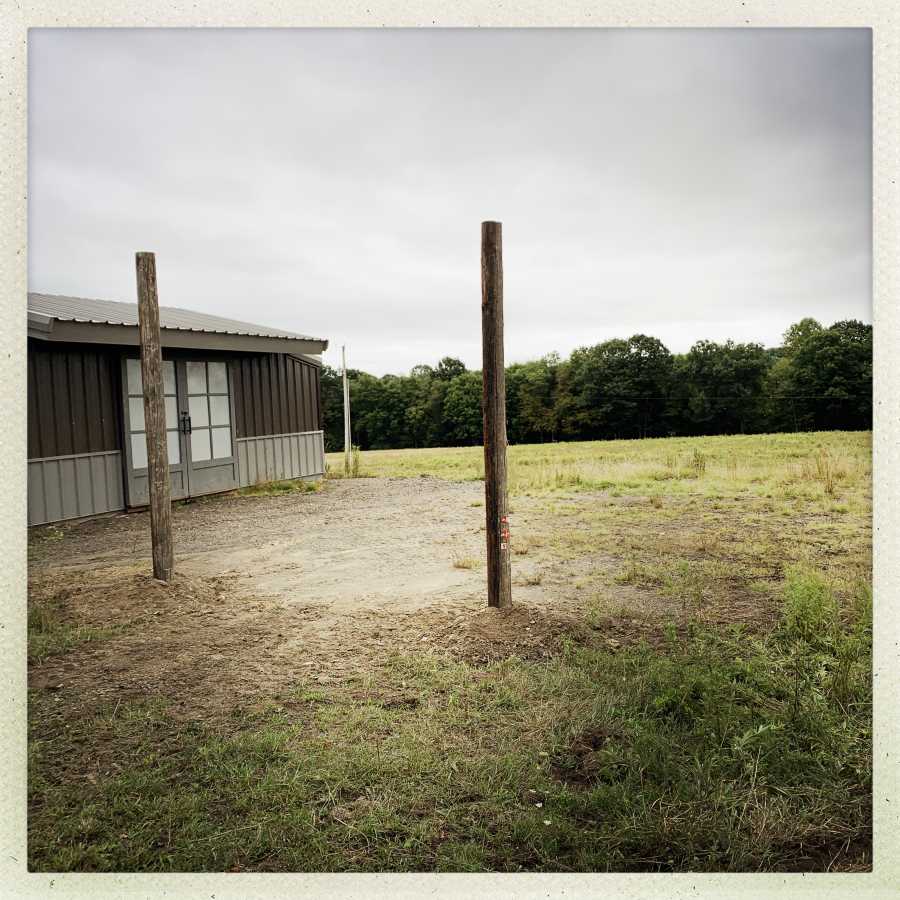 They look uneven because they were photographed with a very short focal-length lens and my phone was not level. One is a bit taller than the other, but that’s what the 12″ wood blade for the sawz-all is for.

So, our plan for the morning is to run to the lumber store and get some sheets of plywood (I have performed mystical calculations yielding the answer: “4”) and rip them up on the table-saw, then we’ve got some screwing and gluing and bandsawing and sawz-alling and hopefully, after that, some painting. I’ll be posting the progress here, with a bit of luck.

I have also been experimenting with freeze-marinading pork spareribs to make char siu, a key ingredient in char siu bao. It occurs to me that I have a test subject who is so fearless that he eats weird fungus that grows on trees, maybe I can teach him the art of bao-making.

Now, it’s time to go out and thump on the side of the van (Q lives in a big black van covered with antennas and solar panels) and see if he survived the tree chicken mushrooms.

The Tuesday State of Play » « Immoral Christianity: 4 – God Is Transactional And Unreliable