If the US political news weren’t already over-saturated with the smoke and flames from the multiple murder dumpster fire that is the executive branch, maybe there would be some attention spared for the tragedy of another oligarch whose turn it is, having to actually struggle to access power.

The Kennedys were/are the prototypical american power scam family; they are what the Trumps hope to eventually be: a multi-generational political machine that regularly coughs up an offspring ‘destined’ to be a politician.

None of this is to say that Joe Kennedy III (not to be confused with his horrible great-grandfather) isn’t a nice guy – he may be. Who knows? Smiling John (who got assassinated) and drunk Ted (who swam out of a sunken car and let his passenger drown) were nice guys, too, but they were mostly Hollywood special effects. What blows my mind is that there appears to be a horrible dual standard in effect: on one hand, we acknowledge that there’s no such thing as a hereditary politician yet we keep electing family members. In spite of the rather obvious fact that those family members lined up for their turn to rule are exactly the kind of people you do not want to have in power, anywhere, ever. Didn’t we learn how monarchy works from watching all the European generations of idiots? No?

BOSTON – Just two years ago, Joe Kennedy’s star was so bright that he was asked to deliver the Democratic Party’s response to Donald Trump’s State of the Union speech. Now, if he can’t turn things around before Tuesday’s Massachusetts Senate primary, he’ll be out of politics.

A handful of recent polls show the 39-year-old congressman trailing incumbent Sen. Ed Markey – the septuagenarian incumbent whose campaign is improbably powered by younger progressive voters. Among voters under the age of 35, one of those polls reports, Markey is leading Kennedy by an almost 2-to-1 margin. 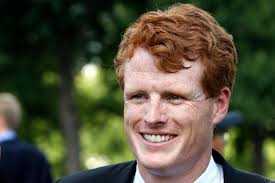 what a fake smile

Seeing another Kennedy “get out of politics” alive is a good thing. In case your memory needs refreshing: the Kennedy family are a successful collection of oligarchs, whose money and power come from bootlegging and stock market manipulation during the depression. The pater familias, Joe I, was one of the examples of “getting richer during a disaster” successfully parlaying a rum-running operation into great success on the stock market (as a way of laundering all that money) eventually becoming the head of the Securities Exchange Commission to fight corruption because he knew all the tricks and where the bodies were buried. The premise of hereditary politics is that there’s something more to the new politician than their family name, but that it’s only good; if there’s a hereditary political skill coursing through the Kennedy gene-line it’s nothing that anyone should want.

Can we describe the desire for a blood-line of politicians as “totalitarian”? It’s an example of the worst of humanity’s many bad ideas, going back to the absurdity of divine right of kings and celestial mandate.

As you can figure, I don’t really care about Kennedy’s politics. Presumably, he’s a pseudo-liberal like the rest of the Kennedy gene-line, because pseudo-liberalism is also a heritable trait. It’s not as if political success is a Kennedy trait – politically, none of them have ever amounted to much, even the vaunted JFK (as Howard Zinn points out)

He’s worth at least $40mn, personally (probably stands to inherit much more) and he doesn’t need to be trying to buy his way into politics. He could be sailing a yacht in The Hamptons or something more appropriate to his class. I hate the fact that the democratic establishment has decided to dust off the gene-line, thereby demonstrating that it (as we already know) does not understand this “democracy” thing. Perhaps they are the party of aristocracy, except they’d have to fight over that distinction with the republicans.