My recent study of labor relations in the US, during “the golden age” (AKA “when the robber barons ruled”) leaves me with a memory of beatings. Endless beatings. It seems as though the establishment’s first resort when confronted is to grab a stout stick, and beat on someone. If that doesn’t work, they beat that person’s wife and kids.

The current battles in Portland, Seattle, Kenosha, etc., are not strictly classified as labor strife, but it’s hard to escape the fact that they are about the downstream effects of a system of oppression that was established in order to create a pool of cheap labor for the new colonies. What’s happening in Portland and Kenosha is what happens when the tools of that system take on a life of their own; i.e.: the Pinkertons and the Baldwin Felts’ begin to demand respect in themselves, and not merely their masters. They’re like the ventriloquist’s dummy that thinks they are the star attraction. If the history of riots in the US teaches us anything, it’s that gestures like sending in the Trumpenproletariat or federal police are going to just get more of those people killed. No matter how you slice it, it’s a few hundred goons against 500,000+ Portlanders. They’re like Chelmsford attacking Isandlhwana: “we have them surrounded from the inside.”*

Tucker Carlson and his ilk, who are defending the police, are just the pathetic end of a long line of “law and order” advocates, who are basically claiming that the police are right always because something. Usually that “something” is that there was a law passed to make protesting in a certain way illegal, so that the beatings could begin. This is a long, long, trend. Though, sometimes, to be fair, the police don’t bother having the law on their side – they just lie. In the long past, the lack of cameras served the police interest well, since they could fob off eyewitness reports as “hearsay.” 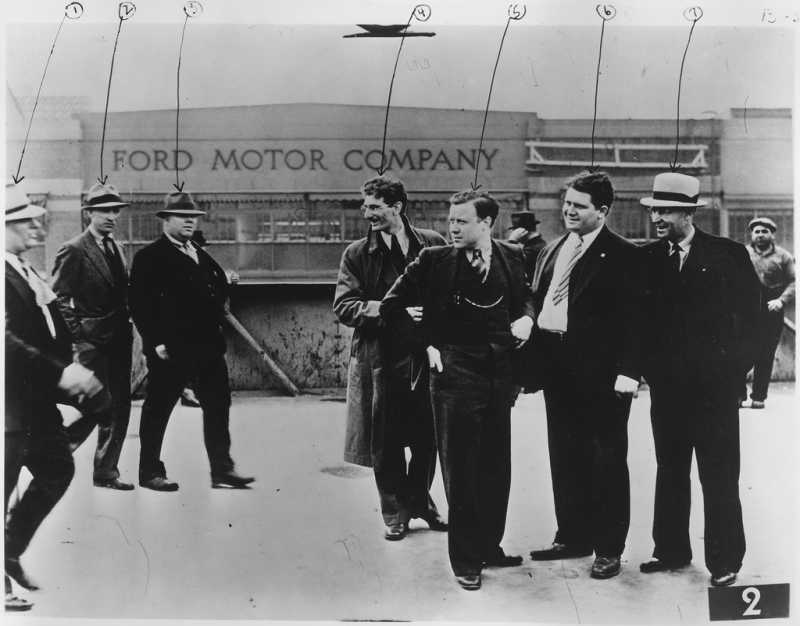 hey are those guys your friends? they don’t look friendly.

This description draws heavily on [wik]:

The UAW had planned a leaflet campaign entitled, “Unionism, Not Fordism”, at the pedestrian overpass over Miller Road at Gate 4 of the River Rouge Plant complex. Demanding an $8 (equivalent to $142 today) six-hour day for workers, in contrast to the $6 (equivalent to $107 today) eight-hour day then in place, the campaign was planned for shift change time, with an expected 9,000 workers both entering and leaving the plant.

At approximately 2 p.m., several of the leading UAW union organizers, including Walter Reuther and Richard Frankensteen, were asked by a Detroit News photographer, James R. (Scotty) Kilpatrick, to pose for a picture on the overpass, with the Ford sign in the background. While they were posing, men from Ford’s Service Department, an internal security force under the direction of Harry Bennett, came from behind and began to beat them. The number of attackers is disputed, but may have been as many as forty. 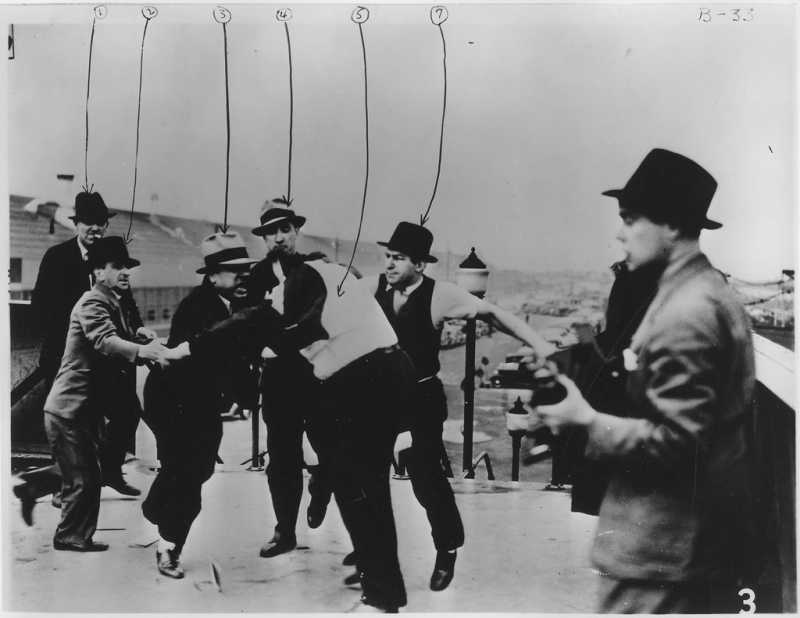 Given that, through the 1900s-1920s, whenever labor called for involvement from the federal government, the government came down on the side of the police and corporations, it’s not unreasonable that a bunch of strike-breaker thugs felt that they could deliver a beating to labor activists on camera.

Frankensteen had his jacket pulled over his head and was kicked and punched. Reuther described some of the treatment he received:

Seven times they raised me off the concrete and slammed me down on it. They pinned my arms … and I was punched and kicked and dragged by my feet to the stairway, thrown down the first flight of steps, picked up, slammed down on the platform and kicked down the second flight. On the ground they beat and kicked me some more…

One union organizer, Richard Merriweather, suffered a broken back as the result of the beating he received.

The security forces attempted to seize the photographers’ plates, but he fooled them with the oldest trick in the book – he gave them other plates that had been stored in his car. [Remember: if you ever cross a border, swap the memory card of your device and de-key your cryptographic partitions.]

President Trump is no scratch on Ford’s Security director [Bennett] who insinuated:

In spite of the photographs, and many witnesses who had heard his men specifically seek out Frankensteen and Reuther, security director Bennett claimed – “The affair was deliberately provoked by union officials…”

Ha, ha, ha, you guys broke your own back? Seriously. These people are all the same, nothing changes.