In case you hadn’t figured it out, the kerfuffle about Iran’s nuclear program really has nothing to do with them being a threat to the US – it’s all an attempt to maintain Israel’s status as sole nuclear power in the Middle East. If Israel is not able to engage in nuclear blackmail, they’d have to negotiate with their neighbors, which is a problem, since some of the neighbors don’t acknowledge Israel’s existence.

Iran wants nuclear weapons because the US taught them, in Iraq, what happens to countries that the US wants to overthrow. Saddam Hussein temporarily bluffed the US/UK axis during Gulf War I, convincing them that he might have WMD that could be deployed if the coalition attacked Baghdad. He was later paid horribly for his success. Every regional power in the world (including North Korea) learned that nuclear weapons are one way to get the US to back off from its plans to “regime change.” Iran’s attempts to develop nuclear weapons has been stymied through dishonest politics (“here, sign our agreement or else. Oops, that agreement no longer counts, but we’re holding you to your side of it.”) cyberwar, and outright assassination. The US and Israel have variously made the totalitarian’s argument, “look, all that assassination stuff is so much nicer than what we’d do to you otherwise.” It has been a very overt effort: people with guns pulling up next to a car driven by a nuclear physicist, blowing them away in a hail of gunfire in broad daylight. [ni] If that is not “state-sponsored terrorism” then there is no such thing. 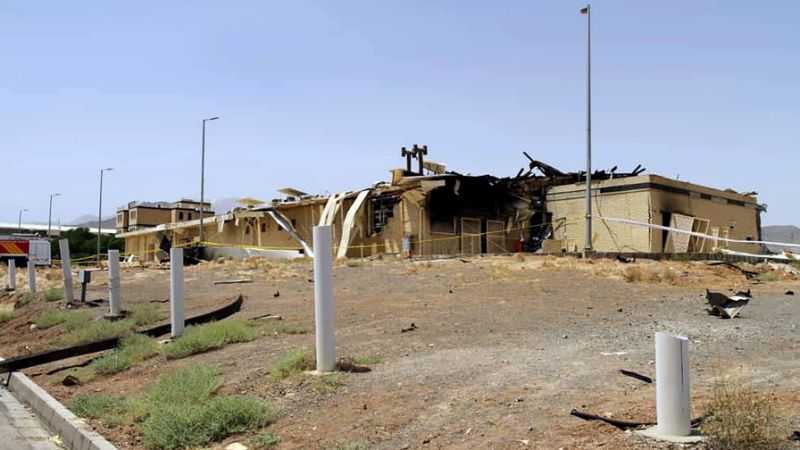 Then, there was Stuxnet – a sophisticated cyberattack using US/National Security Agency (“equation group”) developed malware to disrupt enrichment centrifuges at Iran’s nuclear facility in Natanz. It’s uncertain whether the US pulled the trigger on Stuxnet, or if it provided the software to Israel, which did the dirty work, but it represented a very public setback and threat against the Iranian program. The latest round represents more escalation of threat; it appears that the site was attacked with kinetic (non-cyber) sabotage. [wp] I’m going to go out on a limb and say “there’s no way that’s an accident” because the building that was attacked was the one responsible for managing the loading of the centrifuges – damaging but nowhere near as messy as going directly against the centrifuge cascades, themselves.

That was not an ordinary fire; look at the damage to the roof past the charred area – that’s explosive damage. Also: ordinary fires do not scatter chunks of roofing all over the parking lot.

All of this represents an attempt to delay Iran’s nuclear program, and make it more expensive. Obama’s attempt to get the Iranians to back off from their ambition is now conclusively dead thanks to Trump – he has loudly flipflopped US policy so thoroughly that nobody will take US nuclear diplomacy as anything but a veiled threat.

Initially, when the attack happened, I got a few emails from people asking me if I thought it was another Stuxnet-style attack. But it appears to be the terrorist’s favorite tool: high explosive. You can bet that the computers involved in every part of operations at Natanz are locked down but are probably also subverted in many different ways. The high explosive was a message: the US and Israel will not hesitate to kill.

If there is one thing philosophy teaches us, it’s to look at a situation from multiple perspectives. What would the US do if a foreign power was perhaps involved in sabotage at a US nuclear enrichment site? I don’t think the word “shit fit” is strong enough. It’d be a “turbo jumped up jesus snorting meth screaming shit fit.”

Egging Along » « How to Deal With Confederate-Named Military Bases