Once I had the blade in its final shape, and etched, I stopped sending images of what it looked like to its future owner. Opening a box with a new knife in it should be a surprise, and a small voyage of discovery. It’s especially a surprise if the person didn’t expect a knife and jams their hand into the box to see what’s inside; my sister finally forgave me for sending her an unexpected paring knife many moons ago.

The blade sat on the bench, silently reproaching me while I tried various things for the handle. I made a sculpey master of the cap, with a fish-shape, then did a plaster investment mold from that, and cast silver in it – and it turned out really ugly. I spent a while messing with Blender, doing various renderings that I thought I might have 3D printed in silver. I was not happy with any of these things and I don’t even want to think about them any more. Finally, I emailed the client that I was just going to finish the knife off plain and simple and that I lack the soul of an artist.*

Plain and simple, then. For that, you can’t do better than a nice thick chunk of fine silver: 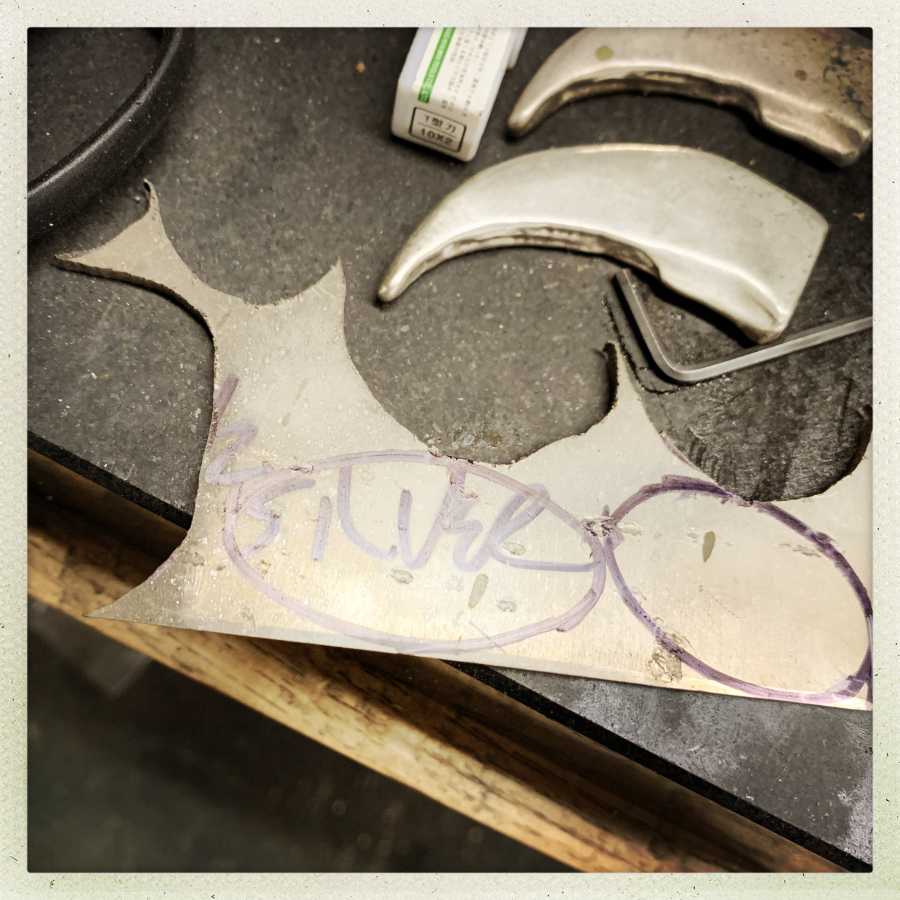 That’s an hour with a jeweler’s saw, and some clean-up on the belt sander, then an hour or two making the hole through the silver fit as closely as possible to the tang of the blade. This is the weakest part of my process, I admit – my tangs are never geometrically even-shaped, and sometimes they are not evenly tapered, which means that there are tiny little gaps between the blade and the bolster. When I see the work of master bladesmiths, who get that fit micrometer-accurate, I cringe a little bit, and mutter things about “soulless perfection” that I don’t really mean.

Then, I drill a hole in the end-cap and thread it (10/32 tap) and grind the end of the tang down to the right diameter by simply rotating it and eyeballing it, then run it through a die to thread it, too. Measuring the distance between the bolster and the cap gives me the length of the handle wood and it’s off to the table-saw with a block of bog oak and my Mitotuyo micrometer. From there, to the drill press to make a hole through the block, and back to the vise where the hole is adjusted to fit the tapered tang by the simple expedient of 45 minutes of filing and sawing with a broaching tool. Some knifemakers have really nice broaching tools; I use a sawz-all blade that I’ve ground down to about 1/4″(5mm) width, the end of which is epoxied into a golf ball (aka: “handle”) with a hole drilled in it. By the way, if you don’t know that trick: used golf balls are very cheap on Ebay or at a golf course, and make great field expedient handles for many purposes. That’s a trick I learned from my grandfather, whose entire violin-making tool kit featured golf balls in many forms including the old gutta-percha ones.

For reasons I do not fully understand, I usually do my handle glue-ups on my kitchen counter. I also do my etching in my kitchen sink. To get the final blade etch, I watched it closely and pulled it from the chemicals when it was at the moment of best contrast.

Once the handle is filled with epoxy and everything is tight and cured, it’s ready for the handle to be shaped. The blade gets wrapped in parchment paper and then gaffer tape; at this point I don’t want anything to scratch it, and also it’s getting kind of sharp and the only thing I’ll have to hold onto is the blade, since I’ll be shaping the handle. 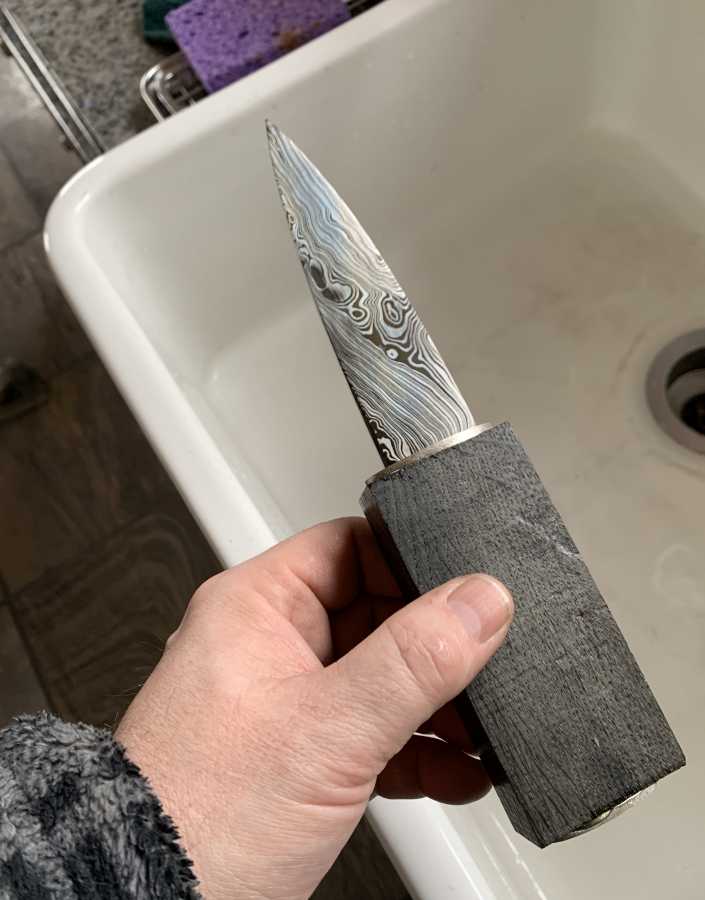 I’ve learned to strategize the handle. You can’t just start removing wood or you’ll wind up hammering the whole thing to bits and starting over. My plan with this one is to use the big 6″ belt sander to set up a taper between the bolster and the cap, then I’ll take a deep breath and figure out what’s next. 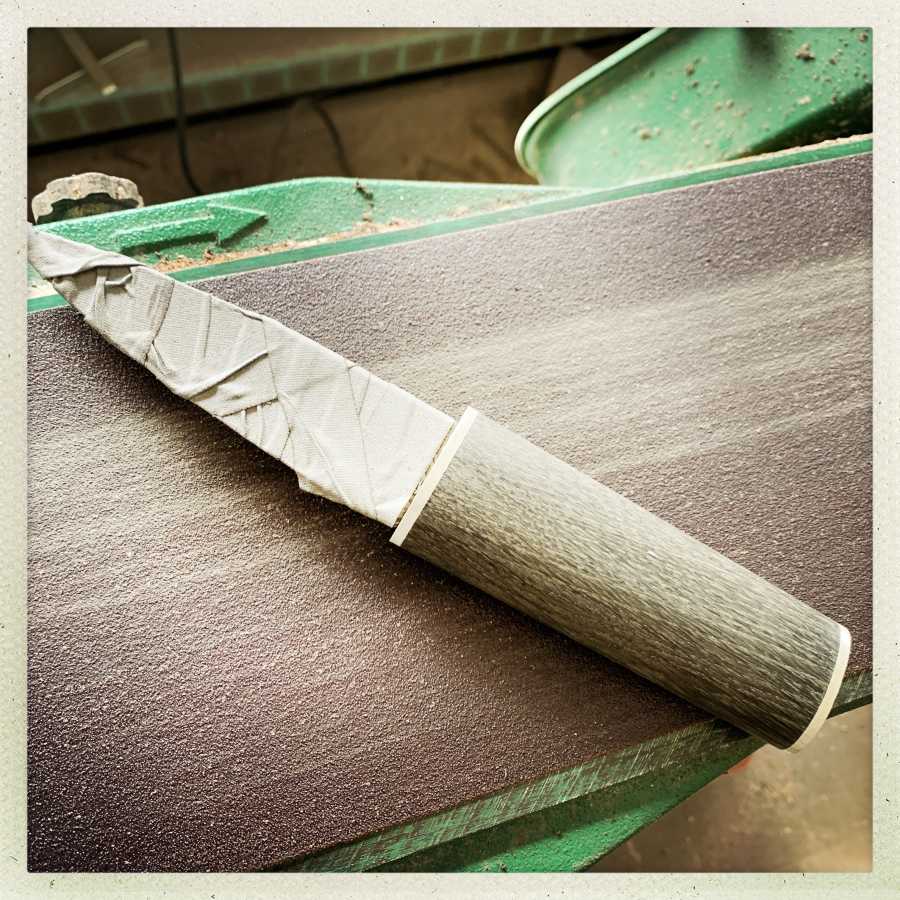 When it got to this point, I was thinking “that’s not bad!” except it’s mighty chunky and this is going to be a stocking-top knife. It needs to be thinner side-to-side by a goodly bit. By now the sanding belt is contacting the silver, which is problematic because it heats up ridiculously fast. I have no idea why – perhaps one of you physicists could tell us something? – but silver seems to heat up faster than steel and (obviously) faster than wood, which is an insulator by comparison. If you don’t pause frequently, the epoxy holding the bolster from slithering around is going to melt. Usually in this case I keep a spray bottle of methanol handy that I can spritz the metal with to cool it if I’m impatient.

Now, I have a problem: I want a kind of lobular “traditional” shape but the only way to get it is to just grind away and make it all work out somehow. After coming this far, “just fudge it” is the last thing I want to be doing, but that’s how it’s got to be. 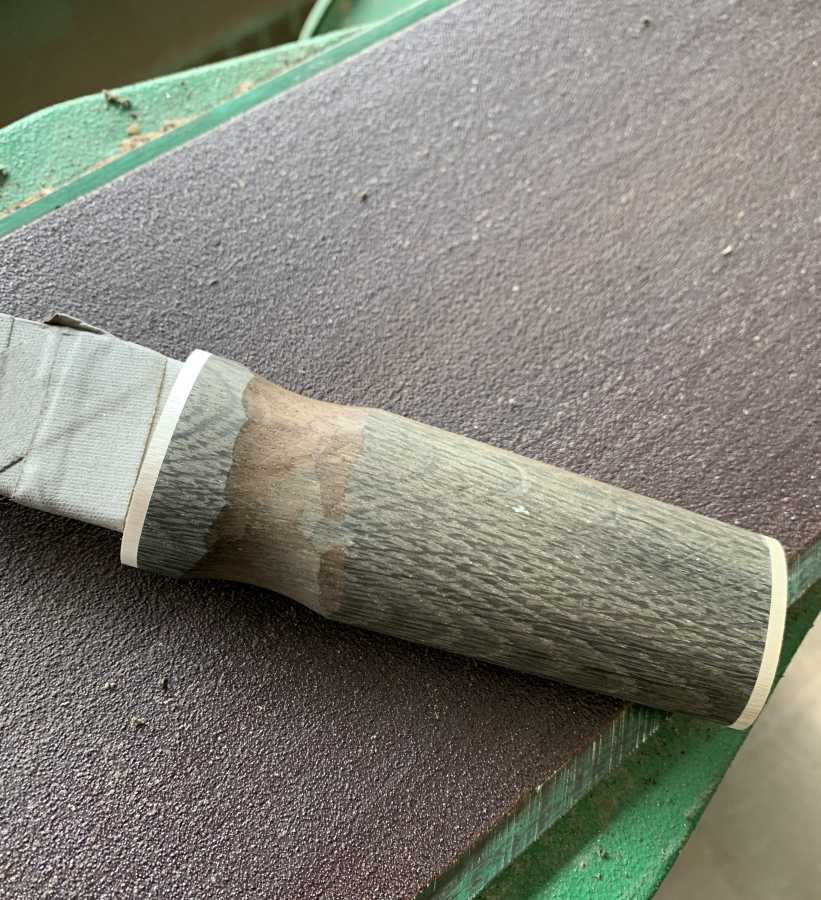 Bog oak is really tough stuff, so it’s slow going. That’s actually comforting since it means I won’t be able to screw up as quickly. If I were using my blade-grinder with a low grit belt, that would take less than a second. The big sander lets me do even planes, and its belts are not very aggressive, so I have lots of time to think and strategize and fudge around and balance everything and stop and look at it while the silver cools. 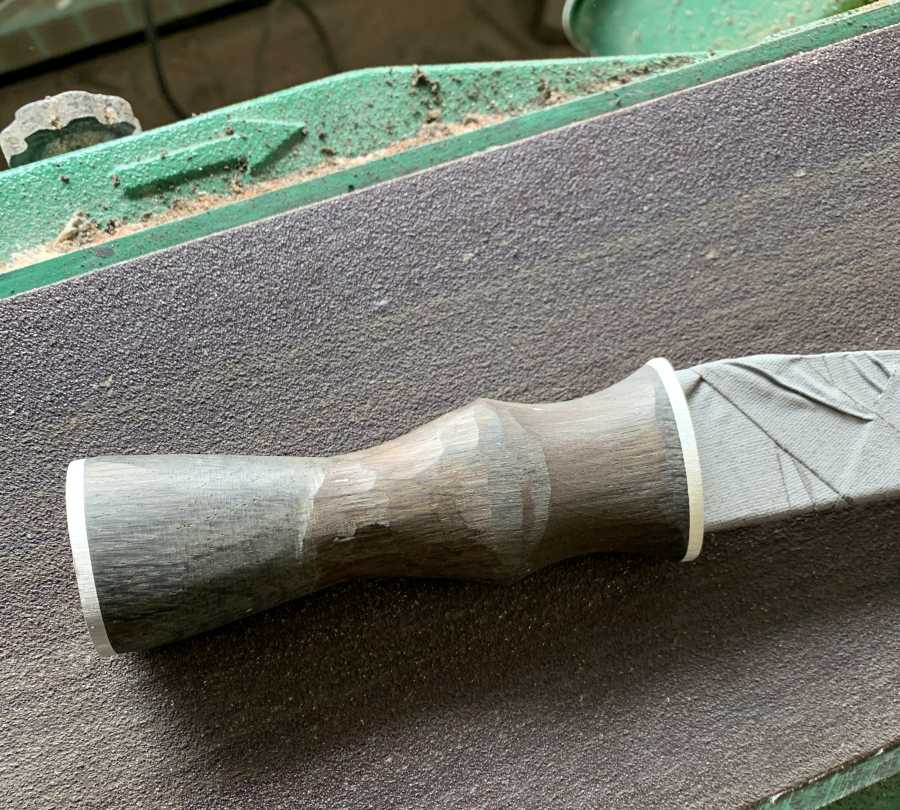 It’s starting to get there, wherever “there” is. And, right as it’s getting there, I hit a pit in the bog oak. See it, there right dead center of the handle from the camera’s perspective? One possibility is that I’ve ground into where the tang goes, but it doesn’t look quite like that. I have choices – leave it or grind it out. I take it to the vise and carefully clean it up with a wood rasp; the pit is not very deep and I can resume breathing. From there, it’s final shaping with the wood rasp, then rough sanding with sandpaper wrapped around the rasp, then successively finer sandpapers and finally hand sanding.

The knife is done. 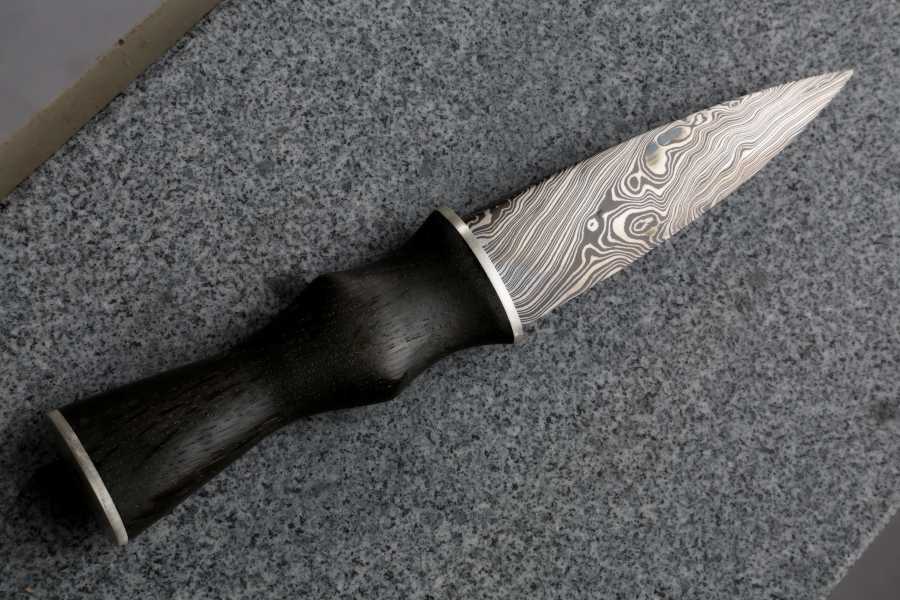 It’s basically “sharp” already, but I amuse myself by sharpening it frickin’ more because it’s supposed to be a hold-out weapon and that means it’s got to be able to cut woolens. Joking aside, I’ve heard stories that people say you shouldn’t take a sgian dubh out of its sheath without it tasting blood, so I may as well make that as easy to get as possible. By the way, that appears to be a generic legend; I’ve heard it about Japanese swords as well, which is nonsense because why ruin the polish with unnecessary salty blood?

Sheath-making is not my forte, though I used to do a lot of leather-work and have a pretty good sewing machine with a walking foot. I just don’t do it enough to be good at it. But I assemble the materials and start laying out the pattern: 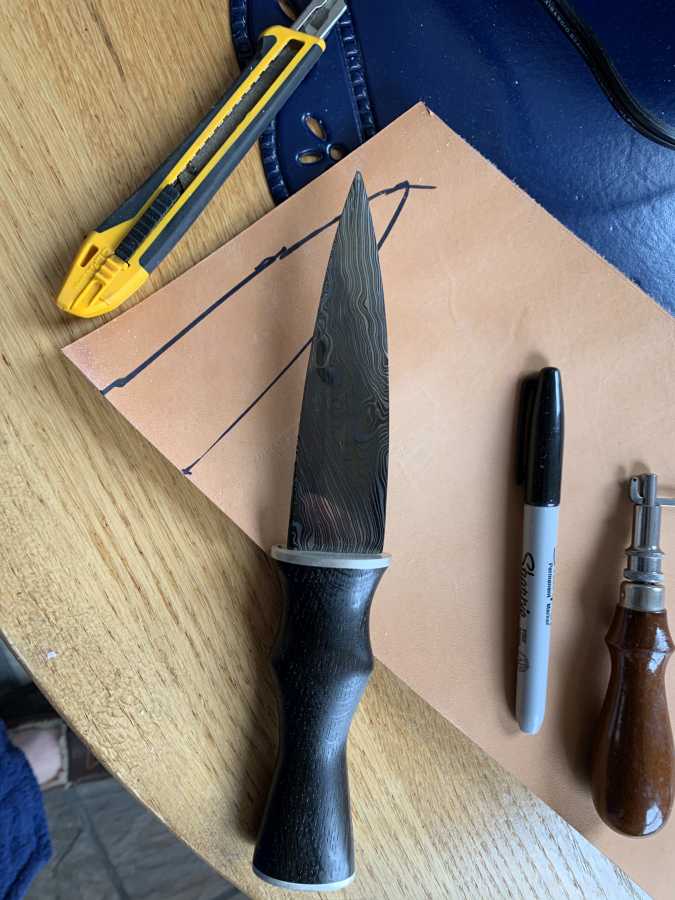 Basic sheath 101 has a gusset that keeps the blade out of the stitches, and two sides that are stitched together through the gusset. I had all the pieces cut out and something interrupted me and I left it all sitting on the kitchen table for a couple days. Then, while I was dozing, I thought about the mackerel and that gave me an idea: what if I cut the shape of the fish through the sheath and positioned it to take advantage of the watering of the blade? 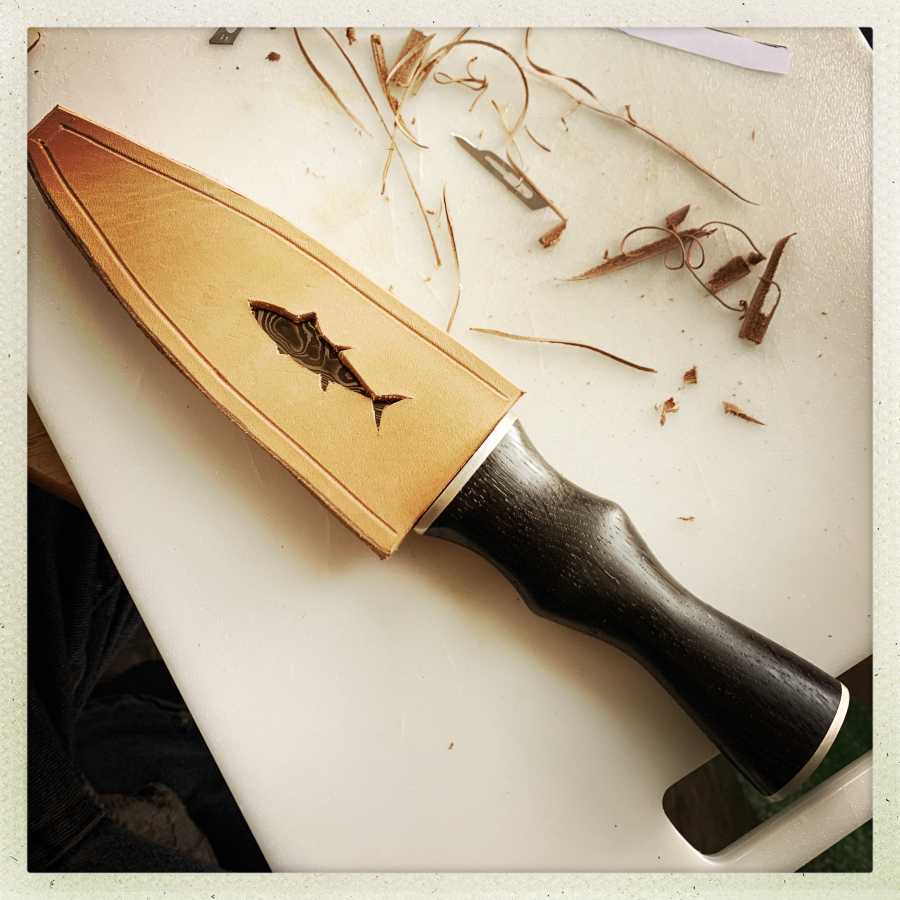 The incised scribe-lines are guides for sewing. Now, I have to admit something painful, here – the sheath above got destroyed when I stitched it. There was a loose fiber in the poly thread in my sewing machine and it caught and pulled the foot sideways and the stitch-line went right off the side of the sheath, completely ruining it. That was just a sign from the knife gods that I hadn’t gotten it right, and I needed to do it better. I like the picture, though. It took me about 20 minutes, each time, carefully carving away leather with a #11 scalpel blade. 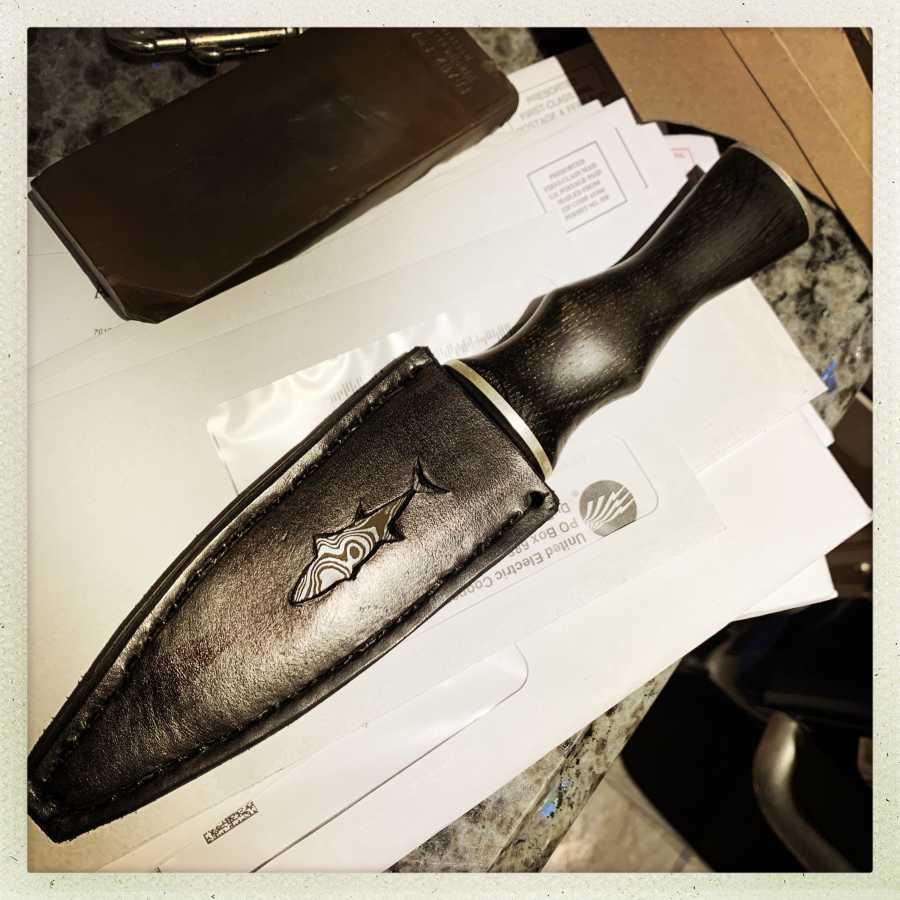 Everything gets a wipe with wax, then wrapped up separately and dropped into the gentle clutches of the USPS. The USPS, by the way, does not think Scotland exists. There’s “Great Britain” and “United Kingdom” but Ireland exists and Scotland does not. Inevitably this leads to a question at the local branch office, as they try to figure out what the zip code means because it’s not in England, per se. The software in the Post Office’s mini scales has to be some of the worst I’ve ever encountered (it doesn’t even keep a running total, and the post officer has to add the tab up on a hand calculator) – it always takes a few minutes to get a package shipped to anyplace other than the US. Because we’re #1!

It got there OK, two days faster than a turned ashwood bowl I sent to someone in England proper two weeks before I sent the knife. COVID has crippled the postal services of the world.

* Soul of an artist: technically, I did have the soul of an artist but someone scuffed the chalk on the pentagram and the darned thing escaped and took up residence in my hammer.

For your information: please don’t store a nice knife in leather long-term. My favorite storage is to wrap things in clean dry felt with a spritz of WD-40 or if it’s a blade in the Japanese tradition, I use camellia oil (the traditional oil for katana blades). And please ignore that nonsense about anyone saying “it must taste blood before you put it away!” – here’s how: “We have a tradition around here that anyone who says that has to donate the blood.”

For an end cap it wouldn’t be unusual for me to cut the tang short, then put a 1/4″ silver rod through the end-cap and sink that into the other end of the handle with epoxy. It looks pretty snappy, that way. But since this knife had a kind of tradition-y look to it and was commissioned for a traditional purpose, I thought that having a little spud of twist damascus at the end cap would be pleasingly old school. I don’t know. I make those decisions on instinct. I have a theory about that, which I ought to do a posting about for some future Sunday Sermon.

Oak, even bog oak, is pretty porous. I rubbed a drop of Birchwood Casey Tru-oil on the handle every day for 2 weeks while I psyched myself up to do the sheath.

So Much Disappoint » « Another Commission, Part 2