The scenario we usually believe has Roosevelt, who was ailing and near death, participating in the Yalta conference with Stalin and Churchill – dividing up the spoils after Japan was going to be conquered.

Roosevelt knew the US was near testing its first nuclear bomb. Yalta was in February, 1945. Roosevelt died of a stroke in April. The Trinity test was in July of the same year. The US obliterated Hiroshima in August. That’s a pretty tight time-line, isn’t it? 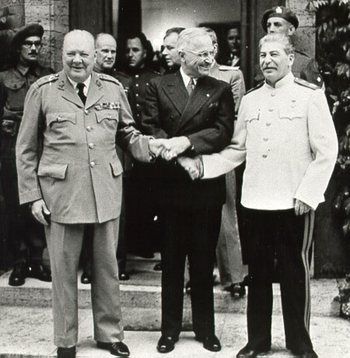 Who’s the worst person in this picture?

I’ve heard a lot of people say that the bomb was used on Japan in order to send a message to Stalin – that the US was seriously not interested in a war with Russia over Manchuria, Korea, or Japan, and that Stalin needed to rein in his territorial aspirations. We imagine Roosevelt knowing that he had this ace up his sleeve, which gave him confidence to negotiate from a position of strength with Stalin.

But in 2007 we learned of more successful Soviet spies in the Manhattan Project. [stderr] The project was, in fact, deeply compromised by at least 5 spies inside Los Alamos, and more outside. [wik] So, I only recently put that all together and realized that the scenario in which Roosevelt was sitting at Yalta with an ace up his sleeve is completely false – instead, Stalin was sitting there knowing that the US was about to explode a nuclear bomb and he would have been carefully assessing everything Roosevelt said to see if the US was planning a bit of nuclear blackmail.

It’s one of those “I know what you know but you don’t know I know” scenarios.

So, I re-read Richard Rhodes’ Dark Sun looking for clues. Rhodes has spent a lifetime researching the topic, so I didn’t think I had to. He describes it thus:

One tried, effective way to save time and expense was industrial espionage. A coded radio message went out from Moscow Center on June 14, 1942 to NKVD agents in Berlin, London, and New York:

“Top secret: reportedly the White House has decided to allocate a large sum to a secret atomic bomb development project. Relevant research and development is already in progress in Great Britain and Germany. In view of the above, please take whatever measures you think fit to obtain information on theoretical and practical aspects of the atomic bomb project, on the design of the bomb, nuclear fuel components, and the trigger mechanism, various methods of uranium isotope separation, trans-uranium elements, neutron physics, nuclear physics, the likely changes in future policies of the USA, Britain, and Germany in connection with the development of the atomic bomb, which government departments have been made responsible for coordinating development efforts, where this work is being done, and under whose leadership.”

By the summer of 1943 there was an open flood of espionage from England and the United States. Soviet agents wanted only conservative, reliable, tested technology from America – their bosses were managers not engineers or scientists and had no way to evaluate untried ideas. The agents knew the penalties for taking risks when mistakes counted as heinous crimes.

So much for the big secret. As Richard Feynman later said: “The only secret about the thing was that it worked at all.” Elsewhere he said that there was not much physics, but a great deal of engineering. The details of that engineering are very complicated indeed but to a theoretician like Feynman it would have simply been “we know we can build it and it’ll work, the rest is just a lot of hard fiddly stuff.”

I don’t buy the theory that Truman’s decision to use the bomb was to send a message to Stalin, but, if it was, it was a message Stalin had already read at least three years earlier. If the “message to Stalin” theory is correct, then the lives of Hiroshima and Nagasaki were burned to a crisp because Stalin kept secret the fact that he knew about the Americans’ big ‘surprise.’ That would also tell us that the US’ espionage efforts at the time were pretty bad, because they didn’t learn that Stalin already knew.

This is how our wise leaders play with other peoples’ lives.

Toilet Paper » « I Admit I Had Not Considered This Important Issue