Any group which is generally male-led, maintains strong insider-versus-outsider privacy, and has its own process for adjudicating misbehavior – is going to be a haven of sexual abuse. Period. This applies in retrospect to the US congress, the roman catholic church, police departments, certain buddhist ashrams, some yoga schools, the boy scouts, etc.

It’s quite possible that there are organizations that are male-led and don’t exhibit this problem, but if they exist it’s probably because they were careful about it. I’m not saying “they are all guilty!” I’m saying “we should suspect them all.” In fact, it’s the very definition of “suspicious behavior” when dissent and complaint are treated as an internal matter. Why? That sure is convenient. Convenient why and for whom?

I had to do some serious thinking before I wrote “male-led” instead of “authoritarian” because sometimes authoritarians are subtle. They know that authoritarianism has a certain creepiness to it, because of exactly this reason: why else would you need to be authoritarian, unless it be to fill people’s heads with bullshit, separate them from their money, or take advantage of them sexually? Authoritarianism is used as a justification for “what I say is right” (without further explanation) and “do as you are told” – which are two of the favorite levers of the abuser. 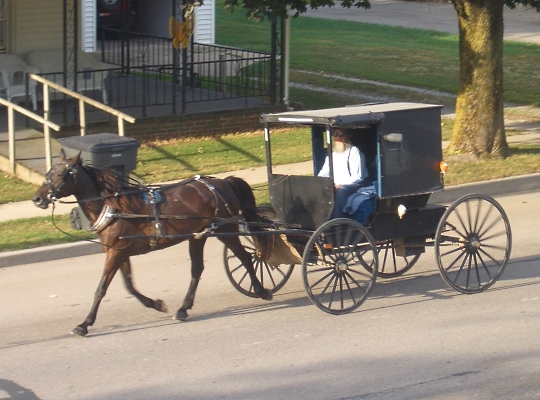 Out here in Pennsylvania, we’re in “Amish country” – there are small enclaves of them all over the place, but in some areas you have to be careful because they’re out in the roads in their stupid little horse-drawn carriages. [Why that’s not animal abuse, I don’t know; trotting a horse on pavement for hours is not good for the horse, at all. Never mind taking it out in traffic where it can get plowed into by a car.] No doubt some of the amish are true believers and great people, but there are also a fringe of libertarian-like scammers, who use their amishness to avoid paying taxes. My big eye-opening moment about the amish was when exwife dragged me to a horse auction, and most of the concessions were run by amish. There was a girl with a severe limp, about 12 years old; at some point her leg had been broken and badly set. She was going to go through her whole life limping because her parents’ beliefs entailed eschewing modern medicine. That immediately struck me as some of the worst religious bullshit I had ever encountered, so I went home and did a bit more research into the amish. Basically, if you’re a child of the amish you can expect to grow up blinkered and ignorant. If you’re an animal the amish own, you get worked to death. If you’re a girl child, your uterus is trading-coin for your father to make partnerships with. You’ll never get an education because you don’t need one. And don’t you dare complain – about anything – because nobody’ll hear you and males run the show. Does that sound like a situation that’s ripe for sexual abuse, too? Of course it is.

As a child, Sadie* was carefully shielded from outside influences, never allowed to watch TV or listen to pop music or get her learner’s permit. Instead, she attended a one-room Amish schoolhouse and rode a horse and buggy to church – a life designed to be humble and disciplined and godly.

OK, here I have to wave a red flag, aside from the sexual abuse issue: their life is not “designed to be humble and disciplined and godly” it is designed to fit into a structure of political control from childhood. Political systems arise for the benefit of someone – usually the establishment at the top. Sometimes, authoritarian political systems use religion as the justification for their power, i.e.: “it is god’s will.” In order to maintain that sort of authoritarian structure, as George Orwell points out in 1984 you want to isolate people and keep them ignorant. If that’s not a nutshell description of the amish, I don’t know what is.

By age 9, she says, she’d been raped by one of her older brothers. By 12, she’d been abused by her father, Abner, a chiropractor who penetrated her with his fingers on the same table where he saw patients, telling her he was “flipping her uterus” to ensure her fertility. By 14, she says, three more brothers had raped her and she was being attacked in the hayloft or in her own bed multiple times a week. She would roll over afterward, ashamed and confused. The sisters who shared Sadie’s room (and even her bed) never woke up – or if they did, never said anything, although some later confided that they were being raped too.

Sadie’s small world was built around adherence to rules – and keeping quiet was one of them. “There was no love or support,” she says. “We didn’t feel that we had anywhere to go to say anything.”

… and her dad was a fake doctor, too. There’s a double-load of authoritarian power for you. And you know that “Abner” was doing that to other girls as well; they always do once they discover they can get away with it.

The Amish, who number roughly 342,000 in North America, are dispersed across rural areas of states like Pennsylvania, Ohio, Indiana, Kentucky, New York, Michigan, and Wisconsin, according to the Young Center for Anabaptist and Pietist Studies at Elizabethtown College, a leading authority on Amish life. Because of their high birth rate – and because few members ever leave – they’re one of the fastest-growing religious groups in America. Lacking one centralized leader, they live in local congregations or “church districts,” each made up of 20 to 40 families. But the stories I heard were not confined to any one place. 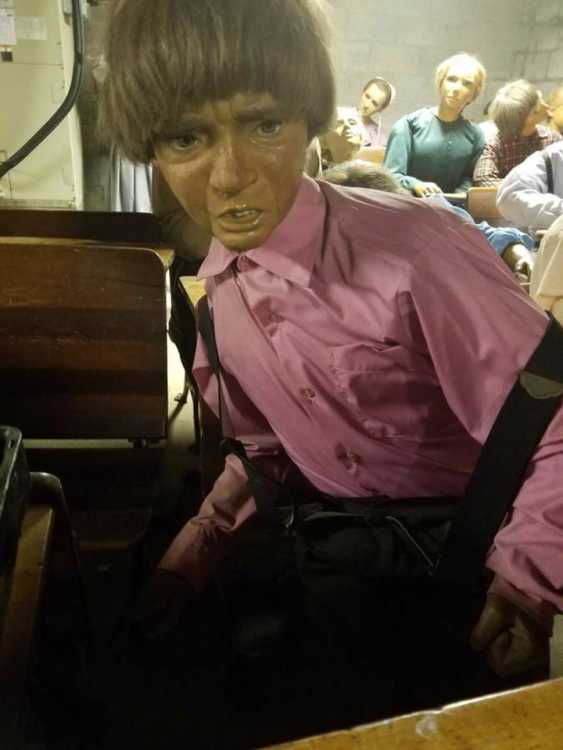 I once described the amish as “America’s own little taliban” and I was wrong; they are not little.

Virtually every Amish victim I spoke to – mostly women but also several men – told me they were dissuaded by their family or church leaders from reporting their abuse to police or had been conditioned not to seek outside help (as Sadie put it, she knew she’d just be “mocked or blamed”). Some victims said they were intimidated and threatened with excommunication. Their stories describe a widespread, decentralized cover-up of child sexual abuse by Amish clergy.

“We’re told that it’s not Christlike to report,” explains Esther, an Amish woman who says she was abused by her brother and a neighbor boy at age 9. “It’s so ingrained. There are so many people who go to church and just endure.”

“It’s not christlike” – a perfect example of authoritarian justification: behave in accordance with the interpreted dictates of an imaginary being, instead of having the ghost of a chance of justice.

“Amish victims don’t even know the names of body parts,” confirms Stedman. “To describe a sexual assault without having any fundamental sex education, it presents even more challenges.”

Keep them ignorant, tell them it’s god’s will.

The amish belief system is not cute; they are a fucking cult – another one of those weird-ass christian denominations that has fundamentally ridiculous beliefs. They experienced oppression and abuse from the established catholic church and other new christian sects such as the lutherans, and came over to North America to do a little preachin’ and genocidal land grabbin’. Because the amish keep to themselves, and claim a strong ideology of pacifism, they’ve got some of the positive brand marketing of the quakers, except it’s completely undeserved. Think of the amish more as christian libertarians and you’ve got the basic idea. They don’t even make beautiful furniture like the shakers did.

If we lived in a rational civilization, there would be a department of child protective services, which would look for and check up on organizations where the organization’s structure and practices were likely to become shelters for sexual abusers. Unfortunately, they’d be really busy, since that is: every authoritarian organization run by men.

A former co-worker lives in “amish country” and used to tell some pretty whacky stories about her amish neighbors. One consistent thread was hypocrisy. A neighbor down the road is amish and owns the “amish scratch and dent” stores, which are a popular and successful low-cost jobber that buys discards that are not supposed to be sold on the public market (think: dented canned food) and sells them to the other amish. Naturally they pay no taxes. The neighbor owns what she calls “the amish mercedes” which is a beautiful (but very humble) horse cart with a matched pair of friesian horses. (Friesians can run $50,000 and up and are emphatically not cart horses). Another neighbor moves houses every 3 years, because his particular amish sect’s rules are that if you buy a house with modern conveniences, you have 3 years to remove them and replace them with 18th century technology. Amish cultists engage in some backward leaps of logic in order to live comfortably in the modern world; many families have a shabbos goy [wik] who owns a truck that can tow horses, so they can get to/from market, etc. In other words: its religion as usual.

The amish reliance on 18th century technology is not inspired by some goofy interpretation of some god’s word; it’s based on self-reliance and fundamentally libertarian politics: it is harder for outsiders to control you if you are self-reliant.

If you try to dig into what “anabaptists” are and where they come from, it’s obscured by suppression by catholics and protestants in the old world. [wik] It’s a variation of baptist cults: the idea that pretending to be john the baptist and dunking eachother in water to wash away sins would somehow clear them of worldly pain. It’s complete bullshit, in other words. There’s not enough water you can dunk yourself in to wash away child abuse.

Re: animal abuse. I once had someone argue with me that “the amish care for their animals and give them work and purpose” which is a flat-out silly argument if you’ve ever known a horse. They are perfectly comfortable to live without pulling a plow; just ask one. The amish feel that god put horses on earth to pull plows and carts, see? Well, I have a belief, which is that god invented fucking diesel engines so that people could make tractors.