In 2007 I did a speaking tour of eastern Europe, including Hungary, Poland, Russia, and Croatia. I spent a night in Belgrade, but my talk was canceled because there were anti-American skinheads waiting outside the hotel looking for Americans to beat up.

In Budapest, there was an ultranationalist protest going on in the town square. I asked my hosts what was going on and they explained that Europe never seems to manage to get rid of proto-fascist assholes. The protesters in Budapest were treated as though they were harmless jerks; as you can see, life went on apace in the town square. It looked though there were a few angry people having a barbecue in the corner. 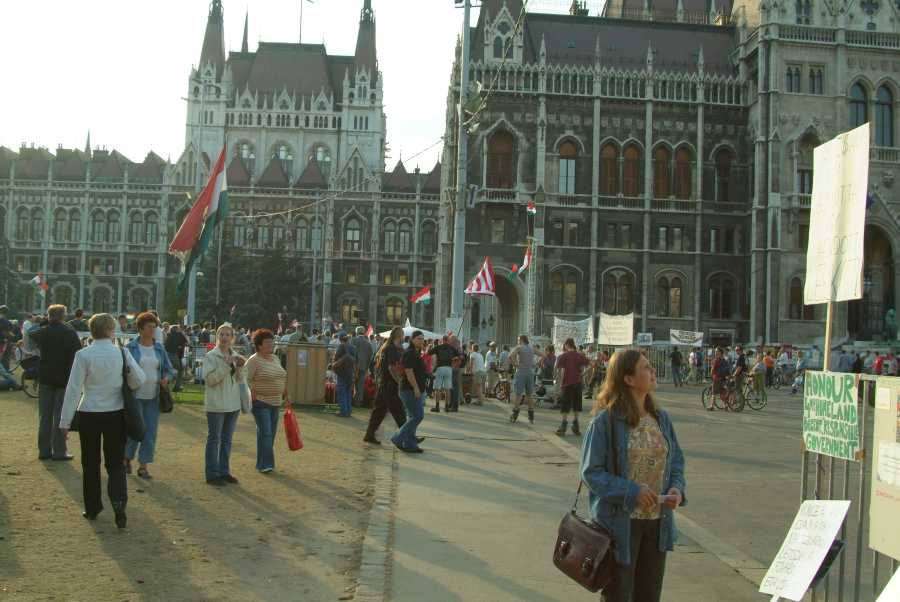 When I got to Warsaw, I did some exploring in town and visited the “old town center” – which I later learned had been completely reconstructed by dismantling buildings elsewhere that had survived WWII, and re-creating the town center from photographs. Later I got back to my hotel and mentioned to the lady at the desk that I was a photographer and was in search of things to photograph. She suggested that I take a bus and go visit the death camp at Auschwitz. I declined.

Instead, I walked, with my huge camera bag, wrapped up in a heavy woolen cloak. I found a place that was interesting: a walled-off cemetery that looked very run down. I did a few pictures; the place was large and I was the only person there. It would have made, I thought, a great setting for a vampire movie. When I got back to the hotel I asked the lady at the desk what it was and she said “Oh! That was the old jewish cemetary. Nobody maintains it anymore so it’s very run down.” 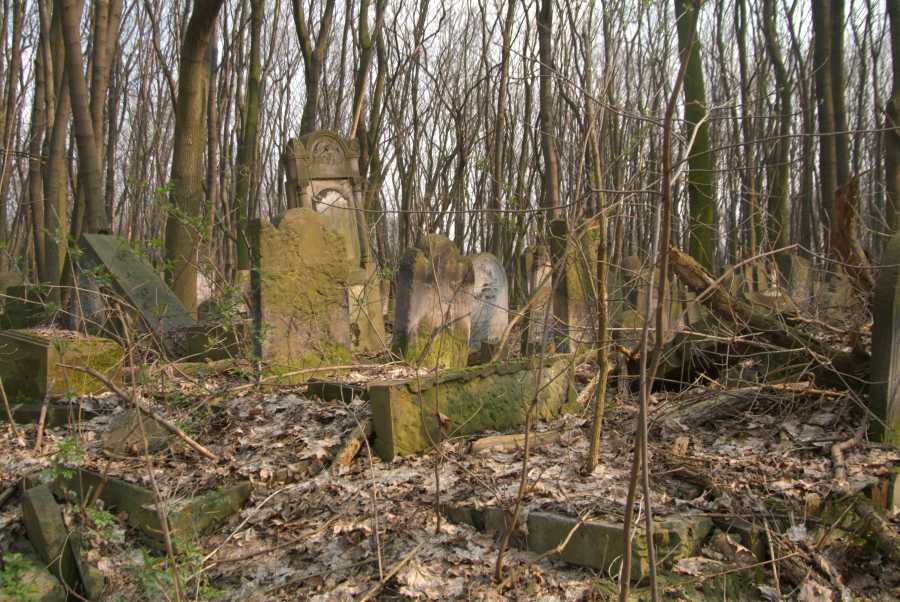 Poland has had an antisemitism problem for a long time; since well before WWII. I remember reading about how the crusades kicked off with massive antisemitic blood-letting all across Europe; the histories I read (Joinville and Geoffroy De Villehardoin) made it sound as though the problem was that the well-meaning crusaders were being over-charged for supplies, but in retrospect it seems pretty obvious that the crusaders just didn’t want to pay at all. When they got to Jerusalem, they killed arab and jew alike, Joinville writing about how they knelt to pray at the holy sepulcher with the blood of infidels dripping onto the floor where they stood.

I recently read through O Jerusalem! by Collins and LaPierre; I need to do a review of it, but it hasn’t settled into my mind, yet. [One of you in The Commentariat(tm) recommended it, for which I thank you] it’s a blow-by-blow history of the founding of Israel, incredibly detailed and full of pain inflicted in great detail on everybody involved. One of the salient threads is the role that Poland and the Polish played in the formation of the state. The facts of history are that World War II was not a sudden aberration – it was a spasmodic culmination of the kind of grinding, deep, systemic antisemitism that has characterized Poland, Russia, France, Germany, Austria/Hungary, and England. It’s not dead and gone, either; Europe exported its problem to the Middle East and managed to avoid confronting it or its consequences. I’d imagine that the lessons learned in WWII were learned deep and hard, but apparently humans’ memory are short when it serves politicians to play on people’s worst instincts.

Last night I was working at the shop, listening to some of WNYC’s On The Media podcast, and they had an episode about how Poland’s reactionary government is trying to eradicate Poland’s role in The Holocaust. [otm] They focus (as do the Polish reactionaries) on modern antisemitism during WWII, basically rolling Poland’s 500+ years of vicious antisemitism into the background. If you want to listen to something depressing, I encourage you to listen to the On The Media episode; it’s a good description of how a government can step in and tweak the teaching of history, to defang the worst of it. Whenever I hear something like that, I review what I’ve learned about US history, and I can see similar fingerprints of propagandists in action over here. Briefly, the OTM piece covers how the government of Poland has been criminalizing discussing Poland’s culpability in The Holocaust, and suppressing publication of information about it in museums. The Polish governments’ efforts at suppression seem remarkably like the kind of thing we’d expect to see from the Trump administration: incompetent, obvious, and ham-fisted. But they aren’t intended to work on this generation; they’re aimed at the next.

It seems absurd to try to obliterate history, but what if it works? 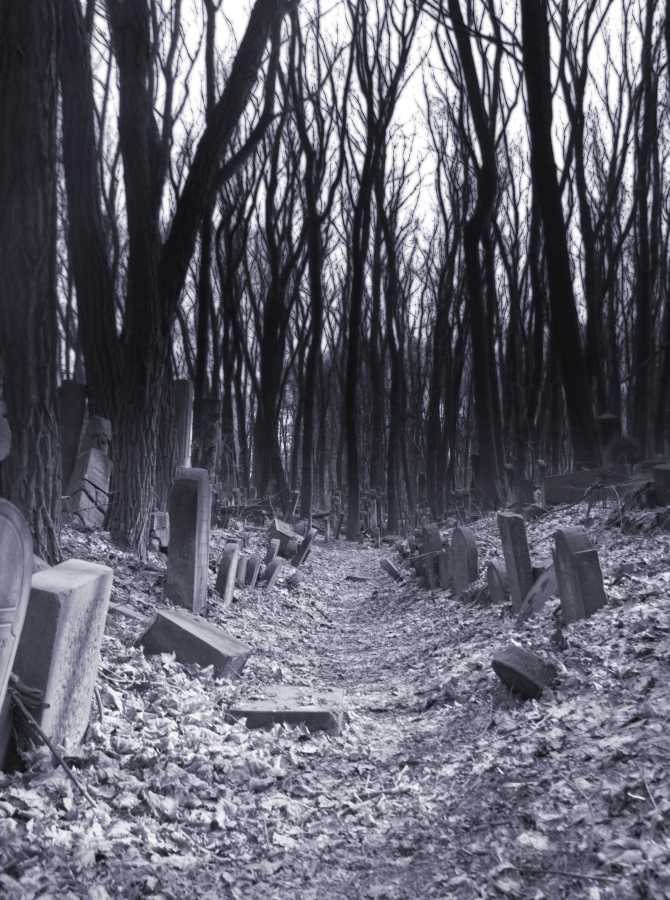 As I visualized it in Photoshop, later.

In Poland, the Cossack Revolt [1670s] with a ferocity and devotion to torture unaparalleled in Jewish experience, wiped out over 100,000 Jews in less than a decade. When the czars pushed their frontier westward across Poland, an era of darkness set in for almost half of the world’s Jewish population. Fenced into history’s greatest ghetto, the Pale of Settlement, Jews were conscripted at the age of twelve for twenty-five years of military service and forced to pay special taxes on kosher meat and sabbath candles. Jewish women were not allowed to live in the big city university centers without the yellow ticket of a prostitute. In 1880, after the assassination of Alexander II, the mobs, aided by the czar’s soldiers, burned and butchered their way through one Jewish community after another, leaving a new word in their wake: pogrom.

The rest of Europe was in on it; it was not just Poland, but Poland cannot rewrite the history of WWII and The Holocaust – and their shameful part in it, any more than they can undo hundreds of years of pogroms that preceded it.

When I got back to my hotel room, and was drifting off to sleep, I realized that the jewish cemetary was untended because there are no jews left in Warsaw. I.e.: between The Holocaust and chasing them off to the Middle East – it worked. Suddenly I was face-down in the toilet vomiting violently. I have never been back to Poland. 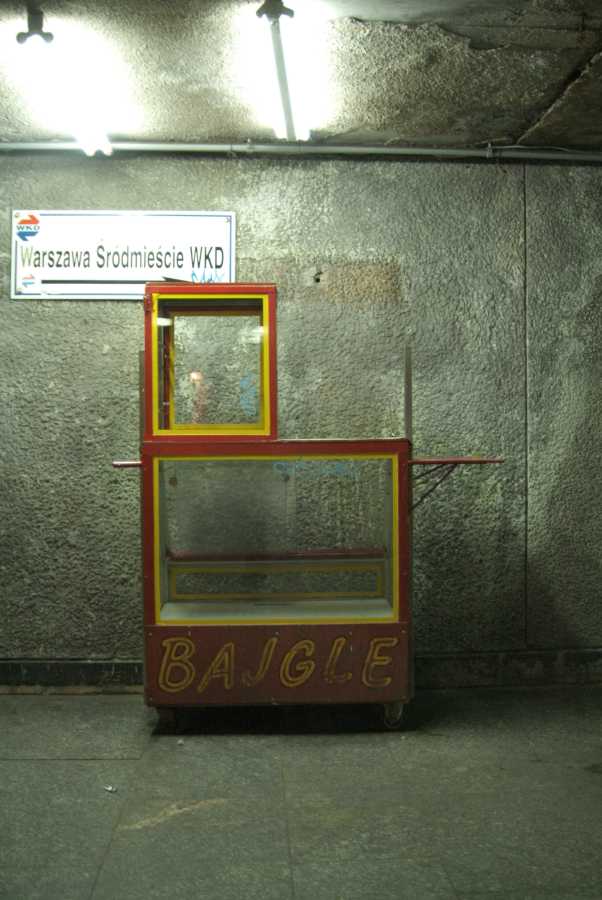 The bagel stand was one of my favorite images from Warsaw. And it ties to a happy thing that I learned about the other day, so let me tell that story here. The subway/train station in Warsaw is a great underground rat-warren of tunnels and tracks. I had a fun time exploring and photographing and eating street food. It wasn’t until I had been down there for about an hour that I noticed something and backtracked a bit: the tunnel entrances had the characteristic angles of blast-suppression zones against nuclear overpressure. The whole subway/train system was Warsaw’s collective hope for surviving a nuclear war; i.e.: futile, worthless. Warsaw would have been hit with 5 or 6 hydrogen bombs in the megaton range. Any survivors would not last long; Auschwitz, unless it was targeted, would survive; it’s 200km away and outside of the blast zone.

Another podcast I listen to is The Bowery Boys, which is about New York City history, by a couple of New Yorkers who love their city. In a recent episode, they talked about bagels, and how huge and important a business bagels have been in New York. Of course, they discussed the origin of everyone’s favorite carb-wad: Polish jews brought them over and they were a huge hit starting in the 1870s – probably brought into the market by the jews who had fled the pogroms following Alexander II’s death in 1880. By 1900, bagels were such a vital industry that they became part of the history of labor and unions – bagel workers were treated worse than the steel workers in Pittsburgh. So far, that’s all depressing, isn’t it? But the part that had me laughing long and hard was this: the bagel was invented in Poland because christian bakers, not wanting competition from jews, passed a law that prohibited jews from producing baked goods. Thus, the bagel came to be: born in antisemitism – a clever dodge to mess with the christian laws by boiling them and ‘drying’ them on hot racks, but not ‘baking’ them. Every time you enjoy a big wad of bagel-carbs, spare a “fuck you” for centuries of Polish antisemites.

A note about capitalization: I generally don’t capitalize the name of religions, because I don’t respect them and it pleases me to show my disrespect in that way. It’s also laziness; if you start capitalizing religion then do you capitalize the pope, too? What about scientology and its theories? I’m not going to start capitalizing “operant thetan” any time soon, etc. It’s easier and more consistent to just disrespect the lot of them. Judaism makes this problem difficult since it’s a religion, a culture, a cuisine, and (arguably) a political movement. I capitalize real places and people. It confuses me, too. That’s the point, I suppose – I’m supposed to take someone else’s imaginings so seriously I build them into my language.