I believe it was over at Mano’s that I hypothesized that Trump would stop appearing in New York soon, because he wouldn’t want to get perp-walked. Unfortunately I make so many snarky comments all over the place, I can’t find it or I could prop up my credentials as a psychic with it.

I, for one, would love to see a standoff between NYPD and Secret Service. It’s a pretty mental picture isn’t it? I’m picturing that scene in Reservoir Dogs where everyone is pointing a gun at everyone else and if someone even hiccups it all goes pear-shaped.

Trump’s move to Florida is almost certainly not about the taxes that Trump avoids paying. For one thing, real estate (which is where most of this alleged wealth is tied up) taxes mostly hit when you buy or sell – perhaps this telegraphs that he’s going to sell a hotel. But I think it’s more likely that he’s aware that he’s going to be too hot for New York, and it’s going to be soon.

But the real issue is climate change; specifically sea level rise. It turns out that humanity is blowing past all of the controls we put on ourselves. And it’s looking as though the ice melt is coming in at the high end of the model. [dk] Have you noticed that scientists have been using the phrase “worse than we imagined” a lot lately? Use of that phrase has become, itself, worse than we imagined.

Human: “Really I will stop eating cheeseburgers as soon as I clear my plate!”
Reality: “But you’re at an all you can eat cheeseburger bar.”
Human: “Coincidence.”

Prior studies that estimated the degree of global sea level rise based on current rates of man-made greenhouse gas emissions all suffered from a simple but crucial methodological error, according to a new study published in the open-access journal Nature Communications on Oct. 29.

The error was in estimating the impact of sea rise based primarily on 3-D satellite imagery from NASA, which led scientists to erroneously establish “the planet’s upper surfaces – such as treetops and tall buildings,” as ground level. This, as New York magazine’s Intelligencer summarizes, was the elevation data that scientists generally relied on when estimating the degree of incursion that rising seas would represent. Scientists Scott A. Kulp and Benjamin H. Strauss, in affiliation with Princeton University and the organization Climate Central, recently discovered and corrected for this error and, with the assistance of artificial intelligence technology, were able to correct prior estimates.

When extrapolated to show the effect of sea rise on human populations, the data now indicate “that many of the world’s coastlines are far lower than has been generally known.” This means that “sea level rise could affect hundreds of millions of more people in the coming decades” than was already feared.

That is a good example of the kind of errors you can get from extrapolative models. You can make a small simplifying assumption and it can throw off later data built on that assumption. In this case, not only are the thermal models trending toward humanity reaching its goal of melting all the ice on the planet, but sea levels are not right either; it’s a negative synergy. Not only is the ground lower, the water will be higher. 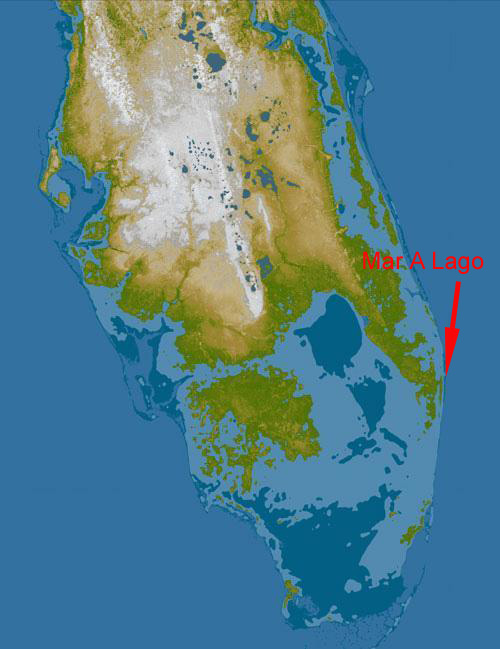 My advice is don’t spend too much gold leaf on the place. The algae (there won’t be any fish) won’t give a shit.

Parsing Sentences (a Joke) » « The Power of Voltaire’s Prayer