Perhaps some of you are wondering why there has been no update on my shop lately.

That’s because it’s basically been sitting there for 4+ weeks. I got the electrical panel installed and inspected then called in a reconnect request to the electric company and … nothing. Then after 2 weeks, I got a call from an engineer who wanted to know what kind of amperage I was expecting to draw; he saw the “heavy machinery” (sorry but a 2hp motor is not “heavy machinery” in Pennsylvania) and wanted to know if I was planning on running everything at once, or just one thing at a time. So I ran through all the items and the circuits and breaker amperages and he said that he’d schedule the hookup. That was 2 weeks ago.

What sucks is that everything from here depends on electricity. The next steps in the build involve welding together some tube steel tables for the forge and an hood over it. None of that can be done with battery power – I need to fire up the MIG and a chopsaw and an angle grinder.

So, everything’s just … sitting there.

The only good news is that all that sitting gave me time to do some more thinking, which meant that (naturally!) the project enlarged a bit more. I got to pondering the main door (which was going to be constructed on a welded frame) and came up with a design for a pair of doors that will go on rolling hangers on J-track. I’ve done some experimenting with PVC board and my biscuit joiner and some PVC biscuits and PVC solvent glue and I’m comfortable that I can build something really strong, light, and interesting. The plan is to use translucent fiberglass in a PVC frame to make doors that are a visual reference to Japanese sliding wood doors from a classical residence. That was the plan for the open wall facing the field, so I may as well make the whole mess match. So I got some materials, made a few joins and let them cure a couple of days, then whacked the bejesus out of them with a hammer. It took several whacks before the PVC board even admitted it was under attack, and the join was a simple T-joint with a single biscuit. The door design will use 1/4″ PVC fascia to stiffen the bottom and the fiberglass will be a structural component epoxied into a rabbet around the interior of the frame. 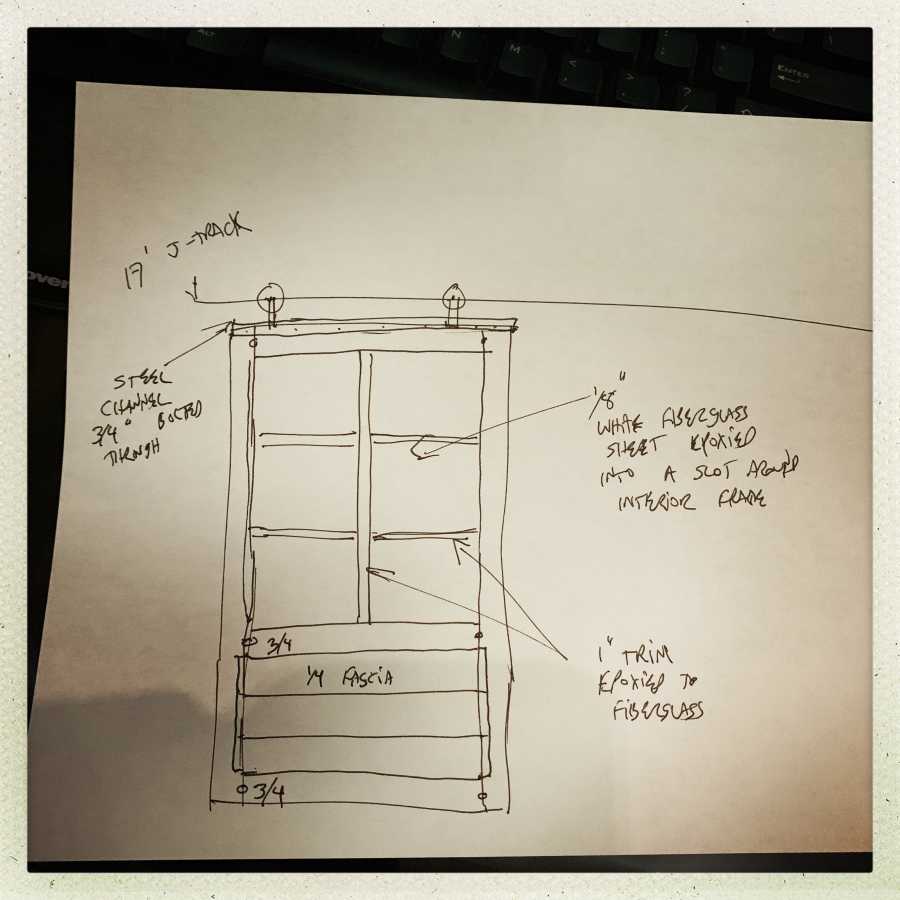 It all seems very complicated, but really it’s a matter of cutting the pieces to length, then doing some cuts on the inner edges with the table-saw, smearing things with lots of glue, getting epoxy in my hair, getting epoxy out of my hair, and tying everything together with straps until it cures. Now that I have a bill of materials, I already have the parts sitting on the shop floor ready to go; I just need time and that means stopping doing the other stuff that’s nagging at my attention. 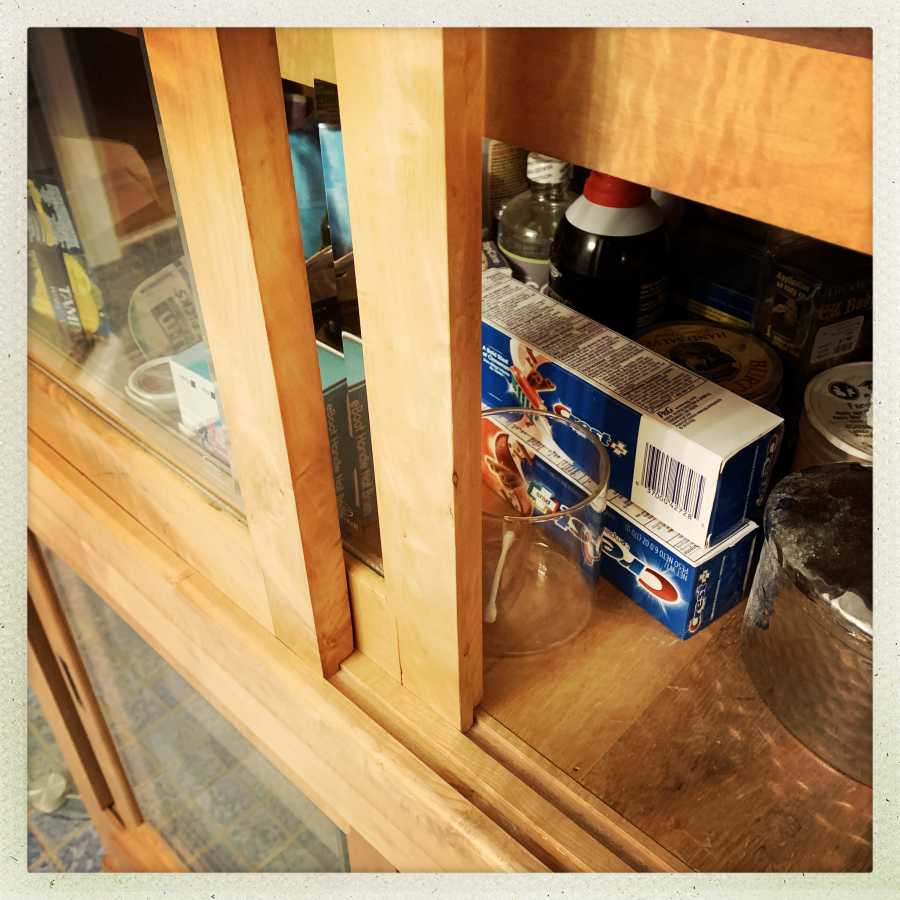 If the hanging doors work out, I will use the same design for the sliding doors. Since I want the sliding doors to be removable and overlappable (like traditional Japanese doors) I’m going to take advantage of PVC’s lightness and strength but I won’t use the suspended J-track and wheel set-up: that stuff is ${expensive} and doesn’t handle overlap well. For the sliding doors I’m going to table-saw a slot down a piece of 3/4″ polypropylene butcher’s block which I will embed in the flooring (which will be 3/4″ wood) – that way the doors will slide on a nice smooth surface and they’ll be held in place with gravity. The grooves on the bottom are fairly shallow but the grooves at the top are deep enough that you can lift the door up and out of the bottom groove to remove it. Japanese-style doors are really clever design and very efficient to make. Naturally, the Japanese compensate for that efficiency by using insanely complex joinery all done with hand tools to make you cry.

Meanwhile, I’ve done a couple of other fun knives including some weird experiments. I’ll probably post some of them eventually, as they find homes. I’ve been having tremendous fun and have been doing a lot of mirror polishes on my bevels. That is an insanely un-gratifying process but it’s really satisfying when it comes out. Perhaps I’ll do a whole posting on it eventually but if you’re into polishing media, look up “synthetic polycrystalline diamond” – it’s actually not that expensive but the stuff starts at 5000 grit (or whatever you want) and as you use it, it fractures into smaller pieces so the grit mesh goes up over time. You can get the stuff online from a variety of places. I have been using a piece of heavy leather bolted to a strip of polypropylene (with projecting doodads that protect my knuckles from the blade edge) and a bit of WD40 and some polycrystalline diamond gives a rapid, amazing, shine. It chews through steel as if it’s cheese, which is nice because hardened high carbon steel normally bears little resemblance to cheese.

The Plan All Along » « Attempting Reparations for Slavery