Today is the day when Americans pause to gloat over the appalling revenge they took in return for 2,977 people killed in the World Trade Center terrorist attack.

This used to be the day when I’d point out that the US killed around 1 million Iraqis and 1/2 million Afghans in retaliation for something a small group of mostly-Saudis did. That was some revenge, indeed. When the US has a tantrum, millions die.

Congress and the American people leapt into action, and quickly passed an unacceptably vague “authorization for the use of military force” that has been used as a blank check for starting wars, ever since. For example Obama’s invasion of Syria was probably done secretly, under cover of the AUMF. Because: 9/11. Meanwhile, congress can’t even put reasonable background checks in firearms purchases.

In the meantime, maybe we can stop talking about 9/11. We were willing to flex our collective might on a global scale, for revenge over something that, apparently, is an acceptable casualty-rate. 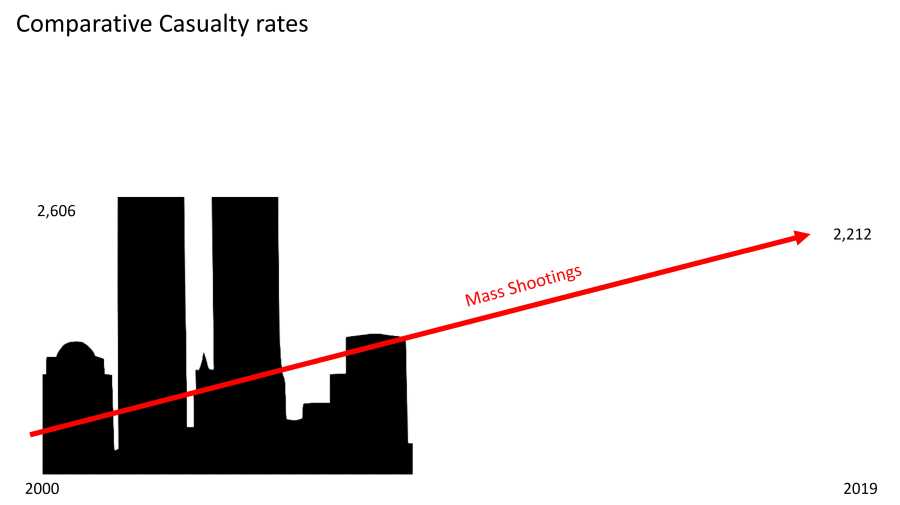 I will not be mentioning 9/11 on this blog again.

I didn’t work very hard on my chart, so I did not include the details of the rate at which mass shooting casualties have been piling up. And now they are counting 9/11 casualties as including people who have died of obstructive lung disease or from toxic exposure during the event. I only counted killed in mass shootings, not wounded, or the red line would be much, much higher than the 9/11 casualty-rate. Either way: please consider this an “infographic” not an attempt to do data science.

I am not saying that background checks will help much with gun violence. It’s just an example of a very low bar that congress cannot even meet. It’s not entirely congress’ fault, of course, it’s just plain old American nastiness.

Memories » « Respect For The “Rule of Law”