Now that the slab is done, the rest is pretty straightforward.

The walls and roof are (mostly) on; there’s some metal missing for the sliding door and one end of the building. Did I mention that these “design your own metal building” guys don’t know how to make anything but a simple rectangle? 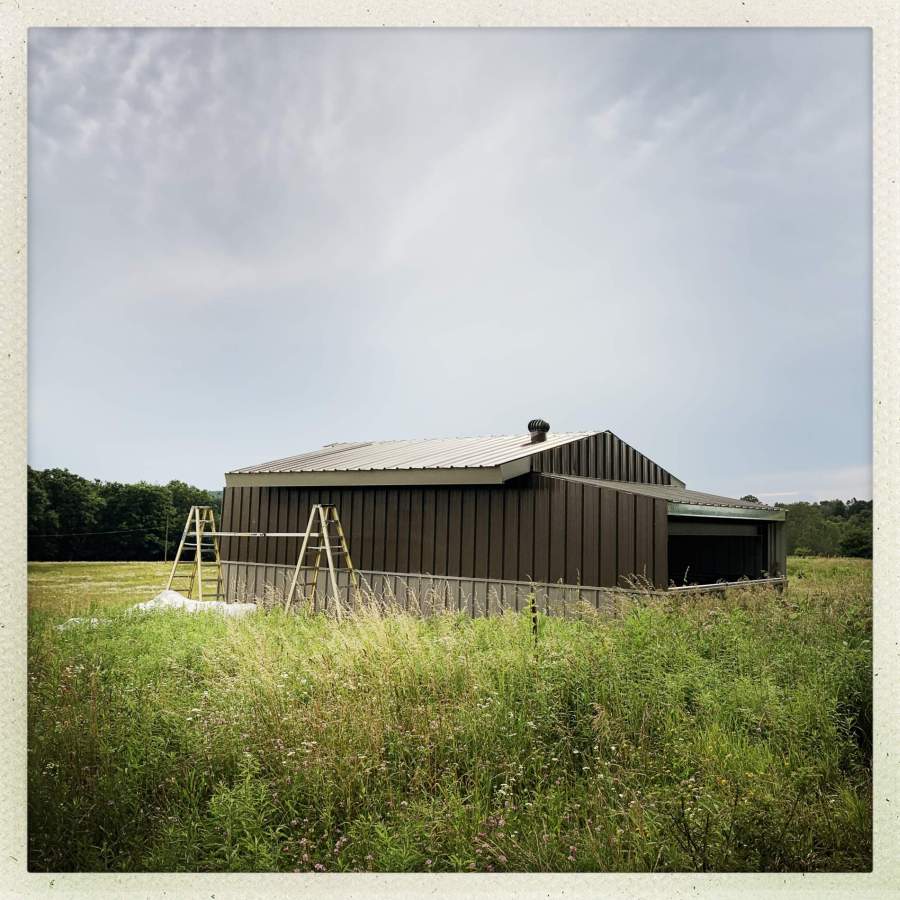 The spinny venty thing is going to be the suck for the hood I intend to weld together and suspend over the forge bench. I believe that if I open the sliding door on the other side of the building (facing windward) it should transfer a lot of air fairly fast. With some luck I won’t have a lot of heat on me unless I want it. 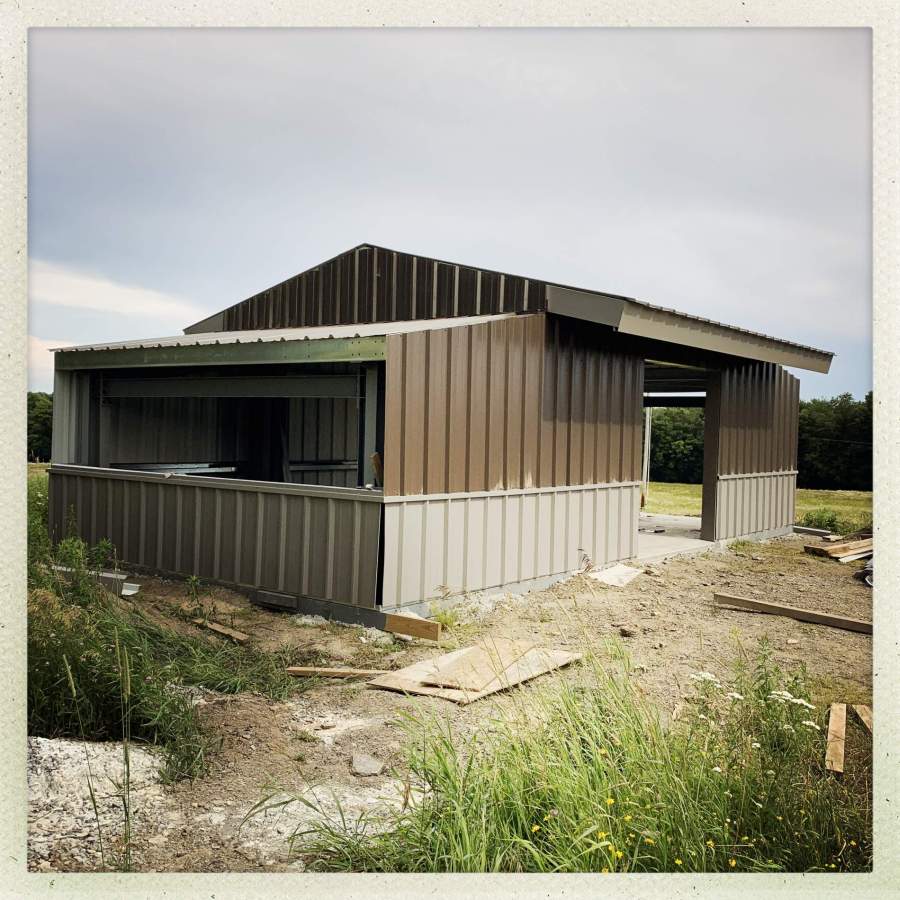 That end of the building is intended to be closed. But that’s OK – you can get this steel roofing pretty much anywhere. The steel building people didn’t design an overhang on that end, damn it, so I will have to build some kind of little rooflet to go over the propane tank. The nice thing about these steel buildings is that you can mount anything anywhere with a metal-tapping screw. 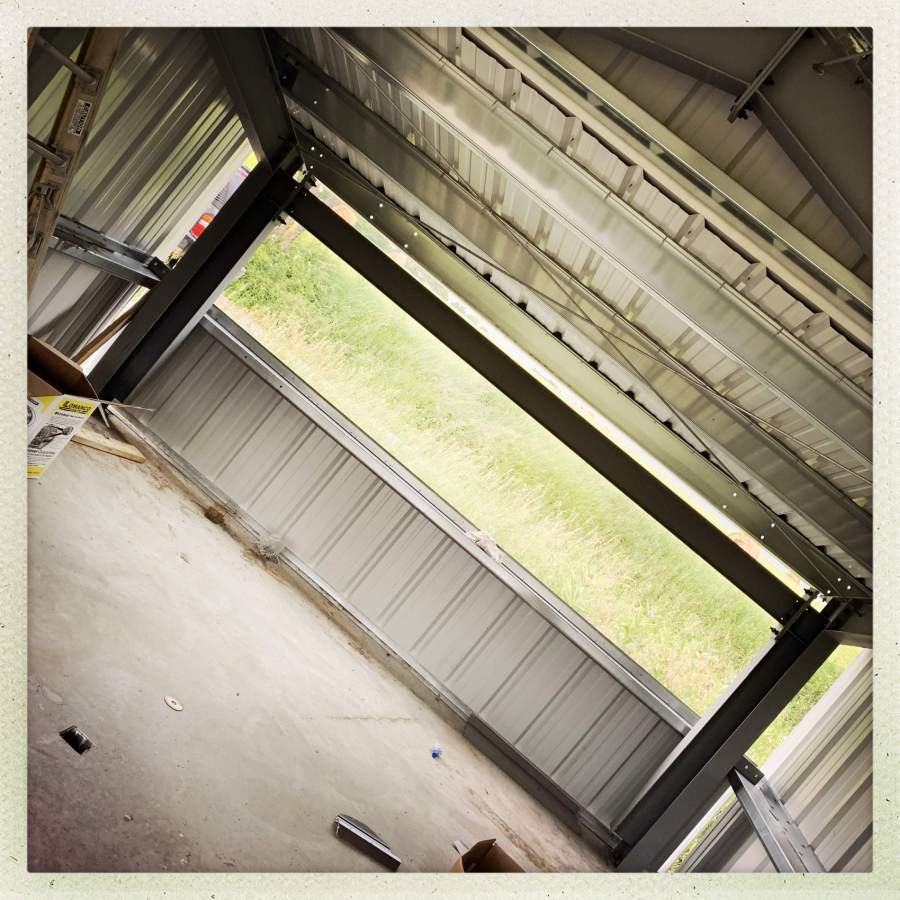 This is the end where the forge is going to go. The pushed out region at the back is to allow storage space behind the forge table – my plan is to put 3 or 4 big standing steel cabinets so I have plenty of room for all the things, out of the way. I may have to re-think that if it means walking around the hot forge. I don’t think I’ll need to worry about that too much but it’s something to keep an eye on. The alternative is to have a cabinet for each part of the process, near where that part of the process happens (i.e.: a hammer cabinet, a press cabinet, and a casting cabinet) 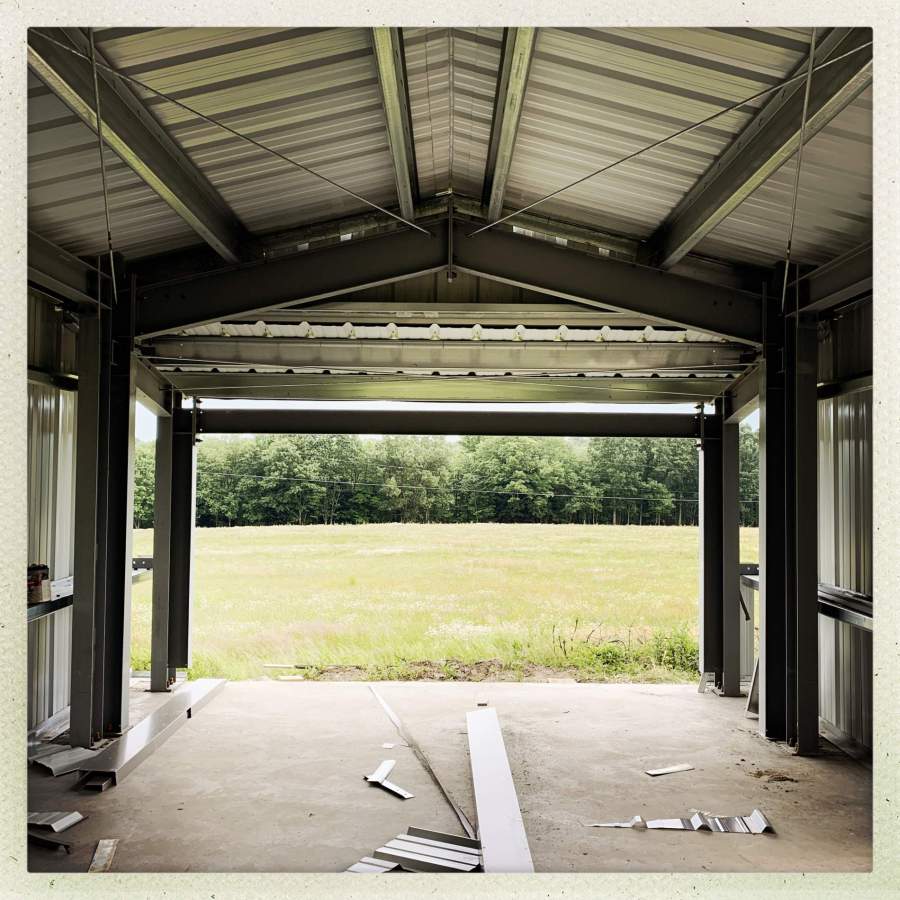 The concrete dips down slightly at this end, where I intent to build a raised floor area that can be for chilling, sitting and listening to music, watching the rain, bleeding, and polishing/sharpening. That’s where the sharpening bench will go. When I build one.

But first things first! I need to run the power. The crew includes an electrician, who is going to handle the hookup and the panel, I’ll do the interior runs. With those big horizontal beams, it’s going to be easy – I’ll just loop tie-wraps around the beam, run the wires through them, then pull them all tight when it’s all working.

This is a huge amount of work. I don’t know why I spend so much time on “infrastructure” instead of actually doing stuff, but I get almost as much enjoyment out of setting up work-spaces as I do actually working in them. As far as I recall, I’ve always been like this.