The footage of the B-2 spirit flying over Pasadena made me wonder whether there have been any crashes of that most unique aircraft.

I really didn’t know much about the B-2, other than its stated purpose and that it was very, very expensive. So, I decided to do a bit more studying up on the plane and its history. The first thing that leapt out at me as I read the Wikipedia entry [wik] on the B-2 program and its surrounding problems and controversy: it’s a case study in “pay more get less” like the F-35. The program originally started with a plan to buy 132 aircraft, and ended up with 20. So, by the time that the quantity had been pared way back and the massive development costs consumed, it’s basically very special-purpose strike aircraft that is ludicrously over-priced for that purpose.

Some B-2 advocates argued that procuring twenty additional aircraft would save money because B-2s would be able to deeply penetrate anti-aircraft defenses and use low-cost, short-range attack weapons rather than expensive standoff weapons.

Because cruise missiles don’t work, or something? “Expensive standoff weapons” are much, much, cheaper than a B-2.

Anyhow, the cost of a B-2 is $1 billion to $2 billion depending on whose line of bullshit you prefer (whether you’re looking at the per aircraft cost, or the fully-loaded program cost) so if you crash a single B-2 you’ve just lost more money than Donald Trump did in ten years.

The cause of the crash was a failure to correct for moisture levels in an attitude sensor, which caused the plane’s control software to go into a bad feedback loop that pulled the plane out of flight attitude. I.e.: made it unflyable. As sonofrojblake pointed out in my previous posting on this topic [stderr] the pilot is not really “flying” the plane; they’re interacting with a control software layer that maintains inherently unstable flight. That means if a sensor is off, you’ve really got a problem:

The findings of the investigation stated that the B-2 crashed after “heavy, lashing rains” caused moisture to enter skin-flush air-data sensors. The data from the sensors are used to calculate numerous factors including airspeed and altitude. Because three pressure transducers had been improperly calibrated by the maintenance crew due to condensation inside devices, the flight-control computers calculated inaccurate aircraft angle of attack and airspeed. Incorrect airspeed data on cockpit displays led to the aircraft rotating at 12 knots slower than indicated. After the wheels lifted from the runway, which caused the flight control system to switch to different control laws, the erroneously sensed negative angle of attack caused the computers to inject a sudden, 1.6‑g, uncommanded 30-degree pitch-up maneuver. The combination of slow lift-off speed and the extreme angle of attack (and attendant drag) resulted in an unrecoverable stall, yaw, and descent. Both crew members successfully ejected from the aircraft soon after the left wing tip started to gouge the ground alongside the runway. The aircraft hit the ground, tumbled, and burned after its fuel ignited.

“Uncommanded 1.6g 30-degree pitch-up maneuver” probably felt a lot like what the pilots in the Boeing 737 experienced: the plane just started doing things under its own control, and the pilots suddenly were fighting against the software, which was operating under a mistaken understanding of what was going on with the plane.

This made me feel like slapping myself on the forehead and yelling “damn!”:

After the wheels lifted from the runway, which caused the flight control system to switch to different control laws

Of course it would have to: the plane behaves very differently when it’s still got a toe on the runway. What a crazy complicated piece of software that must be! Speaking as a former (recovering) software programmer, I simply can’t imagine how you can build something that complicated and have any confidence that it is correct. All you can do is test the assumptions that you can define and hope for the best, I suppose. 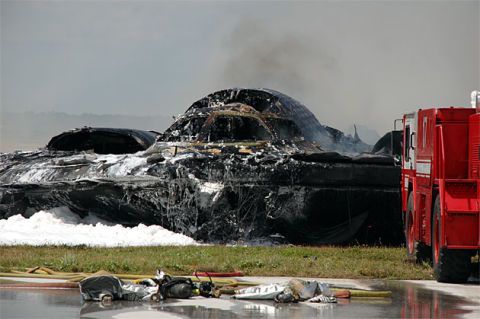 By the time the plane stopped burning, the most expensive air accident in Air Force history was over. Although, that’s just in terms of aircraft costs – the cleanup cost was higher for the B-52 that crashed at Thule AFB in 1968 [wik] carrying multiple H-bombs, scattering chunks of highly radioactive material all over the place.

I’m glad the pilots survived unhurt, though I must say I assume they are horrible people, to be willing to serve such a thing.

The Thule crash had the benefit of finally stopping the Air Force’s ridiculous Dr Strangelove scenario, in which they kept B-52s with live nukes in the air, 24/7, in case the Air Force’s budget was going to be cut, or something. The whole history of the Air Force’s rotating flights with live nukes is a bizzare part of the cold war story, having virtually nothing to do with making the country safer (or the USSR less save) and everything to do with empire-building within the US military, and grabbing for maximum budget.

I was tempted to snark about how calling a B-2 bomber Spirit of Kansas was probably a mis-signal, but then I realized that pretty much any US state’s a problem and naming a bomber after a state is probably unintentionally appropriate. Someone should suggest to Donald Trump that they rename the F-35 after him.