It’s not a toy, it’s an instrument of mass death.

The B-2 Spirit stealth bomber is a first-strike weapon designed to penetrate the air-cover surrounding a target and drop a massive conventional bomb, or a cluster of nuclear weapons. Out of the black, in the dead of night, the B-2 announces its presence when the explosions begin, or there’s a blinding flash and a moment of utter silence before the shockwave comes. It’s a product of America’s best and brightest, made at tremendous expense and with great secrecy.

It’s hard to understand how America justifies weapons like the B-2. The justification is easy: it’s for defense. What’s hard is how anyone believes that. You don’t defensively sneak up on someone and drop unexpected death on them – that’s “offense” not “defense.” The twisted logic of American imperialism is that anything that might restrain us is an attack against us. Anything that might counter-balance our globe-spanning power is a preparation for aggression. So, if some country builds an air defense grid to keep other nations’ military aircraft from freely overflying their airspace, that is an offensive move if you’re the US, and you expect to be able to freely overfly anyone’s airspace, at any time, with nuclear-capable bombers. We just saw a demonstration of this logic in Korea, recently, in which the US’ ageing fleet of B-1 Lancer bombers engaged in an “exercise” – i.e.: practice run, for flying a decapitation strike against North Korea. You know, North Korea, the pariah state populated with weirdos who act like the US is constantly ready and practicing how to kill their leaders with a single strike? Those weirdo North Koreans got the message that the B-1s were supposed to send, loud and clear. It’s the people who somehow saw a test-run for a first strike as a “defensive” maneuver, who did not get the message.

Donald Trump famously wouldn’t know a nuclear triad if someone hit his golf cart with it, so he exemplifies the great American people, who have been thoroughly duped by the lies of the “defense” apparatus. I know you understand, if you’re here and reading this, that the “triad” is a left-over of the cold war, in which the idea was to maintain a counter-strike capability that could not be obliterated by a first strike. At the height of the cold war, the US kept B-52 bombers in the air 24/7 (carrying H-bombs) so that in the event someone was stupid enough to strike the US, the bombers could not be hurt. They would be able to carry out their mission of nihilistic revenge even if the US homeland was a shattered wreck. But the bombers were just one leg of the triad; the other two were the missiles in the silos and the ballistic missile subs under the water. The thinking was that nobody could obliterate all three legs of the triad simultaneously and the surviving legs would provide a holocaust of retaliation. Those of us who actually think about these things realize pretty quickly that the bombers were never necessary; the other two legs were sufficient, and for purposes of retaliation they could be 1/10 or less their current size. 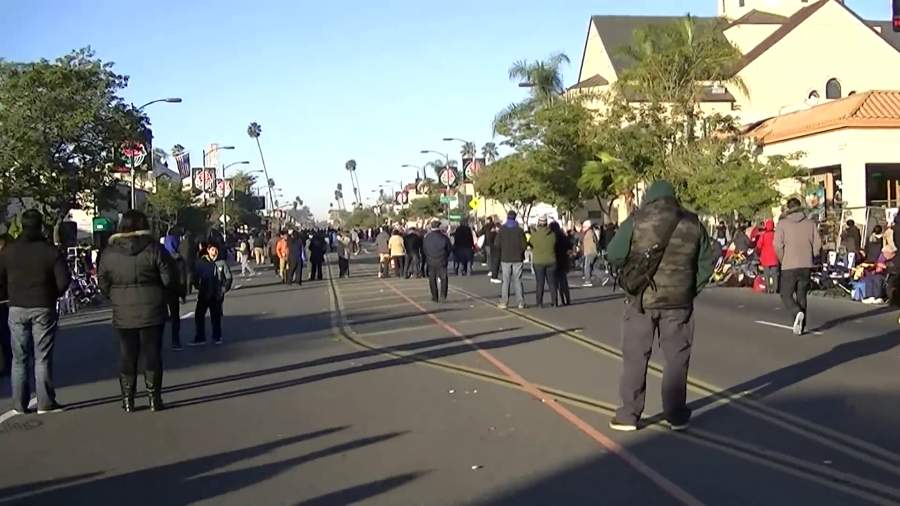 Let me give you an example: England. 24 H-bombs would be all you’d need to literally bomb England back to the time when they erected Stonehenge, including killing nearly half of the people on the island. That’s quite a deterrent. A single US ballistic missile sub carries 8 times that bomb-load: 24 missiles carrying 8 warheads each. A single US ballistic missile sub can turn all of Russia into a wasteland. That’s quite a deterrent. But we have many times that, and the missiles in their silos, besides. But those are not first-strike weapons. The big ballistic missiles aren’t stealthy because they’re a counter-strike: they’re the message of death from the dead hand of America, which is presumably already burning and destroyed.

The stuff that scares everyone is the offensive weapons. Those are the stealth bombers like the B-2, which appear over a target and obliterate it, like the squall-front of a horrible storm that follows right behind. The B-2 is the weapon that destroys the target’s ability to fight back, so it can’t retaliate. In simple terms, the B-2’s job is to punch you in the face so hard you’re unable to resist the bulldozer that runs you over a few seconds later. The US freaks out when anyone builds first-strike weapons that might work against us, because for all that we talk about peace and deterrent, what we’re really doing with all these weapons is positioning ourselves so that we can “win” a nuclear war against anyone. Smart people in the 60s and 70s asked the question “what does ‘winning’ a nuclear war even mean?” and they didn’t come up with any good answers, other than something Conan the Barbarian would recognize. Because of the nature of nuclear retaliation and balance of terror, the only nuclear war that is victorious is one where you genocide your enemy, unscathed. Anything less is unacceptable. So, the B-2 (and now the new hyper-precise stealthy cruise missiles the US is developing) are not there to keep someone else from winning a nuclear war: they’re so we can win a first strike against anyone.

What should freak us all out with boggled terror is how obliviously foolish our fellow Americans are about this stuff. These weapons are the opening notes in a symphony that ends with “the living shall envy the dead” – limitless tears and open-ended tragedy. We as a civilization are so depraved that we think these weapons are entertaining. In fact, we place our children in their path, like some kind of innocent sacrifices to Moloch.

In the picture above, it would normally be night when the B-2 would come drop its bomb-load. You can listen to it, how quiet it is. In the parts of the world America holds in contempt, people do not gather in the streets like this, because the hellfire missiles may come and they may all wind up a statistic in some CIA scorecard, marked down as “insurgents.”

But now I have to get to what really pisses me off: there is no escaping the flat fact that military aircraft are dangerous to have around. And some nationalist goon thought it would be a good idea to have a stealth bomber fly over some crowded suburban area, at near stall speed, to – what? Maybe the idea was to show a bunch of happy people what the state has in store for them? A long-range bomber like a B-2 is a flying fuel tank with space for carrying weapons and a small space for pilots. And every so often, some air show ends in fire and pain when a military jet goes out of control and disassembles itself into the now burning audience. Because I track F-35 and jump-jet failures (also the Osprey) I am painfully conscious of air show crashes, in which a military aircraft augers into the audience, breaks apart, and sets a bunch of people on fire. 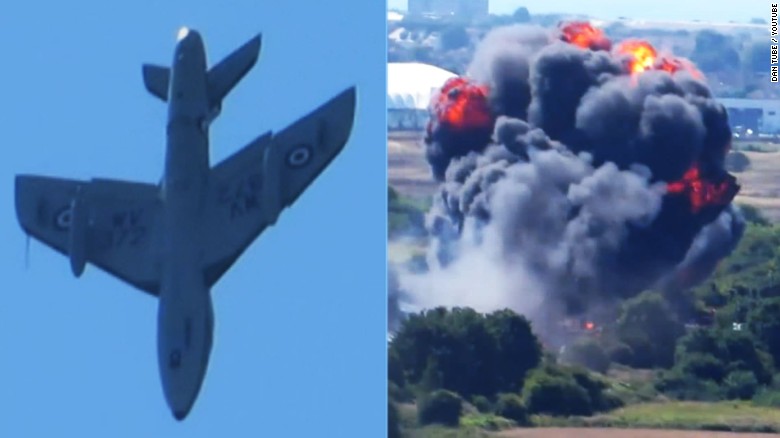 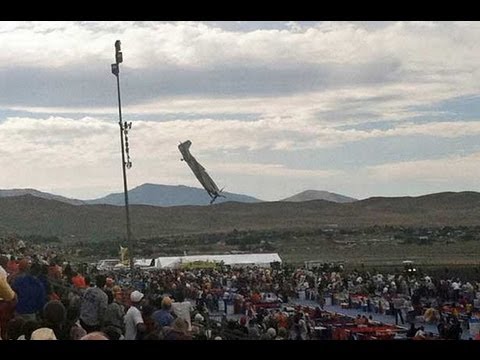 If you watch the death-wing you can tell it’s wobbling a bit because it’s just hanging at the edge of stall speed. It’s also in seagull country: the pilot would have under 1 second to react if one of the plane’s engines ingested a bird and failed. I’m sure the pilot knows what they are doing, but so did the other pilots at other air shows. The difference is that, instead of being a bunch of people in a field expecting to see military aircraft doing dangerous things, this appears to be a city street.

The Shoreham crash (below) the plane landed in a parking zone and splashed burning fuel on everything. This is not a thing you want to contemplate happening to a suburban street full of people, with residents and businesses. But someone approved the B-2 flyover, because Americans are so in love with their own subjection, that they see these weapons as toys. 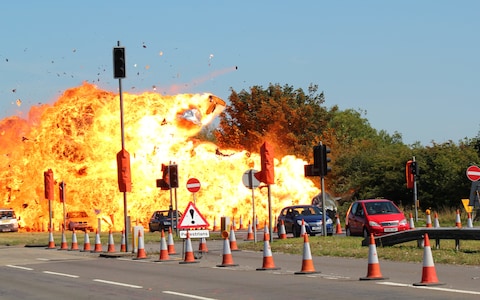 The worst air show crash, so far, was in Ukraine, when an SU-27 bounced and exploded right in the audience. 77 people were killed and over 500 wounded.

These things are weapons, not toys.

Weapons are instruments of fear; they are not a wise man’s tools.
He uses them only when he has no choice.
Peace and quiet are dear to his heart.
And victory no cause for rejoicing.
If you rejoice in victory, then you delight in killing;
If you delight in killing, you cannot fulfill yourself.
– Lao Tze, Chapter 31 [link]

I suspect Lao Tze would have bitter words for someone who sees the weapons of war as toys for tots.

How To Burn Money Like Trump » « Foundations and Mud