For your consideration we are auctioning a chef’s pwning knife in 1095 and 15N20 high carbon steel, with ebony and resin-impregnated spalted maple handle. Overall length is 14″ (400mm) with 6″ of that being handle. This is a big handful of knife.

It has a fairly thick back and a nifty sweep to it. You can do a hell of a job on chicken or cauliflower with it, and it would do hellacious slash-damage or thrust penetration if necessary. In other words, this is a “kitchen defense” knife.

High carbon stains and can rust, so it needs to be cleaned and lightly oiled before it’s put away for any period of time. Red meat will stain the blade in an attractive bluish color so everyone will know you’re not a vegan. The handle can be brought back to looking great by the simple expedient of rubbing a drop of olive oil (literally, a drop) across the wood in the palm of your hand. Do not put this in a dishwasher.

[Note, I am doing another auction in parallel with this one, so if your taste is more gothic, you may wish to check that one out first.]

Flaws: Normally, I’d have pre-shaped the handle on my bandsaw but the bandsaw needed a new blade so I freehanded it on the grinder. I think it’s fine but it has a hand-shaped look and the planes are not machinist perfect. But, then, very little that I do is machinist perfect. The primary flaw is that the blade has plenty of scratches; I don’t mirror finish things very often and if you’re freehand grinding large bevels like I do, there are almost always a few low spots. To chase the scratches in the low spots out, the blade would get all distorted. So I just remind myself to grind better next time. In other words, this knife has flaws because it is handmade. 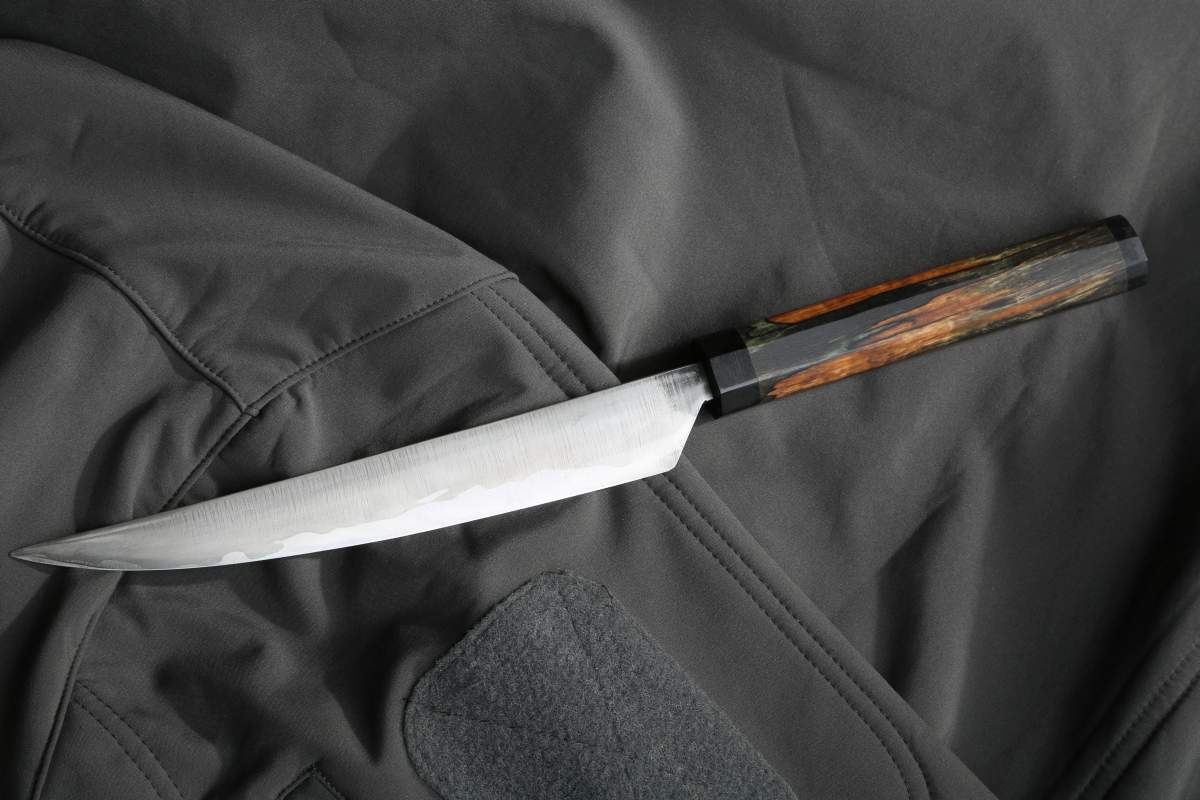 The cloudy-looking transition-zone along the edge is where the 15N20 (higher nickel steel) is sticking out from between the layers of 1095. It is not a temper-line. The blade is edge-quenched in a way so as to de-emphasize a temper line.