It’s really not Jazzlet’s fault; it was just something that they said, which made me pick up a pretty small piece of twist damascus and try to hammer it into a little knife suitable for wrenching the eyes out of potatoes. 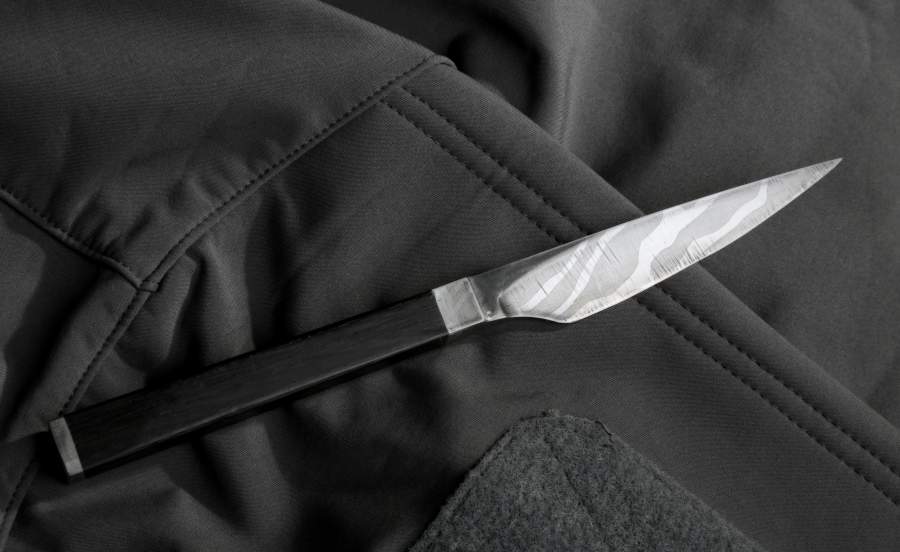 1095/15N20 twist low-layer damascus, with integral bolster. This is the first integral bolster I’ve done and they’re a pain in the neck – you have to get all the surfaces perfectly straight or the handle will make unattractive gaps. To make matters worse I decided to use another cut-off piece of the twist damascus to make an end-cap – which meant through-drilling the handle wood, threading the end of the tang, and assembling the whole thing with PC-7 and a very gentle wrench. Once I had it all together, I shaped the handle on the sander then realized that I couldn’t etch the steel in acid, anymore, since it would eat the wood. So I suspended it in an acid bath – you can see the line on the bolster.

Edit: the handle wood is 7000 year-old bog oak that I vacuum soaked with linseed oil.

Since this was a prototype I didn’t put a lot of work into the finish, hence the scratches in the blade. I rough-ground it to get the lines I wanted and by the time I had finished chewing great scratches in the steel, they were too deep to polish out. Normally you’d shape something like this on 60-grit then when it was looking about right you’d drop to 120-grit and keep polishing out the scratches. A lot of knife-making is chasing scratches.

The steel bolster and cap came out lovely but they were a pain in the neck. The wood of the handle is a lot softer than tempered steel, so the steel would heat and I had to stop and put the blade down so it wouldn’t burn or crack the wood. You also have to be very careful not to polish the wood more than the steel – a piece of sandpaper knows no allegiance and it removes wood a lot faster than steel. So, this became an exercise in patience, which I’m running out of. Hence the remaining scratches. The knife is in that gray zone between “not fine-finished enough to be valuable, but way too nice to chop up and get rid of.”

It’s small and light and feels great in my paw. I actually tested it on a potato and indeed it’s great for ripping their eyes out. That raked grind leaves a lot of steel along the back of the knife, so it’s quite a bit thicker than you’d expect – it’d penetrate pretty well if the potatoes started to fight back.

I’m going to put this on the benefit for FTB auction. I just haven’t gotten around to writing up the procedures for that, yet.

Notes on product photography: Again, I’ve used my Chinese military rain parka; it has such great texture. The stitches and whatnot give a sense of scale without interrupting the eye or giving an overall color-cast to the scene. In order to get the details sharp, I stopped the lens way down (F/16) and used the big strobe in my softbox as the main light. There is a second light (a snooted strobe) to camera right, which is creating the shadows in the fabric and gives the scene a sense of depth. When you’re doing a product shot you shouldn’t post-work it much unless you’re a marketing jerk who wants to make the product look better than you know it is. Sure, I could have photoshopped down the scratches and boosted local contrast in the blade, but then it would look very different in reality. I did use a minor photoshop trick I call a “black flare layer” which slightly softens the image before you resample it down into the final version – oddly (it’s a quirk of how photoshop resamples) that makes the image look slightly sharper.